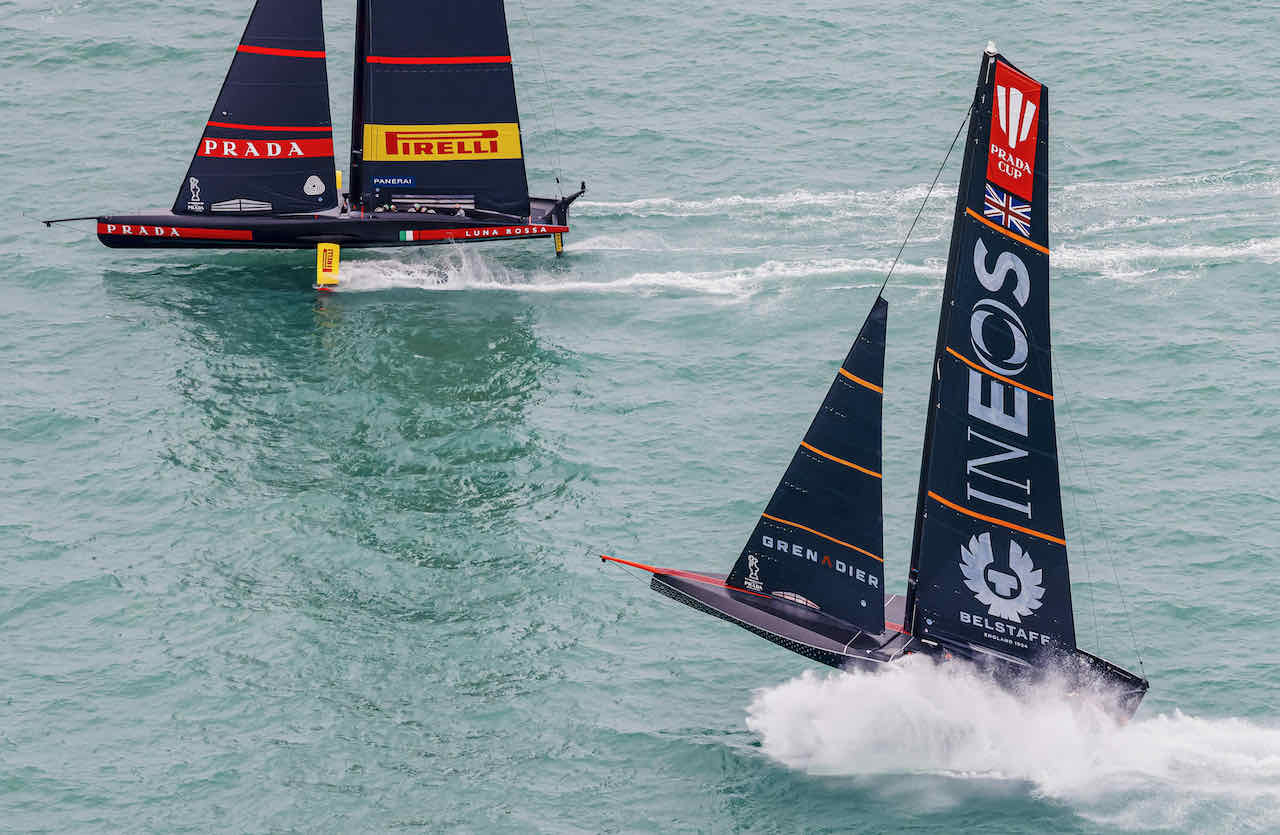 UPDATED: A 72-hour Covid 19 Level 3 lockdown for Auckland has been announced by the New Zealand government today. This has forced the America’s Cup organisers to postpone Wednesday’s scheduled races. Details of when racing will resume are yet to be confirmed.

Day two of the Prada Cup Challenger Selection Series for the 36th America’s Cup dawned grey and blustery in Auckland, New Zealand with winds in the 14 – 18 knot range and cloudy skies. Out on Course E on the Hauraki Gulf conditions were more akin to The Solent than the Mediterranean – a portent perhaps of better fortunes for Ben Ainslie’s British Ineos Team UK squad?

Having lost out in both races yesterday to the faster and more composed Luna Rossa Prada Pirelli Team, Ainslie’s men knew they needed to up their game and bring the fight to their rivals if they were to stop the rot by putting some points on the board.

No surprise then that first race of the day turned out to be a full-on bar room brawl of an encounter. The Italians had the British in a choke hold even before the boats had crossed the start line after a mistake by Ainslie handed control to Jimmy Spithill in the pre-start.

The Ineos crew had looked full of confidence as they tore into the box from the left-hand side and headed for the right-hand boundary. But they mistimed their turn to head back to the line, leaving it seconds late and allowing Jimmy Spithill and Francesco Bruni on Luna Rossa to gybe inside them to grab the controlling position and to lead back towards the start line.

The Brits problems were compounded when Ainslie tried to attack the Italians with an attempt to hook Spithill when the opportunity just really wasn’t there. The mistake put Ineos fully on the back foot and left them gassed by the disturbed air coming off the Italian boat’s gigantic mainsail all the way back to the line.

The trailing British crew tacked away on to port before crossing the line, but the Italians slammed on a cover tack to parallel them out towards the right-hand boundary. What followed was a short tacking skirmish as the Brits tried to shake their way free, but Luna Rossa remained in the controlling position for the rest of the leg to round the left buoy of the windward gate 100 metres and nine seconds ahead.

There was virtually nothing to separate the two boats in terms of performance down the first run and at the bottom gate it was the Italians who led by a similar margin through the leeward gate.

The next beat was a masterclass in how to control your opponent from the Luna Rossa afterguard. They relentlessly matched every move the British tried tack-for-tack as the two teams picked their way upwind. This constant harassment forced the British into an uncharacteristic overstand at the windward gate enabling the Italians to stretch out to an 18 second delta as they rounded the right-hand mark.

The British had a good second downwind leg to close the gap to 11 seconds at the leeward gate and force a promising spilt as Luna Rossa rounded the left buoy (looking upwind) and then stumbled through a quick tack onto port, while the British made a smoother rounding of the right marker.

The Italian lead was down to less than 100 metres when the boats converged but a series of clinically effective cover tacks soon put paid to any hopes the British had of getting close enough to challenge for the lead.

With one leg to go there was a hint of desperation aboard the British boat, as evidenced by a hurried gybe soon after rounding the left-hand buoy that nearly shook mainsheet trimmer Bleddyn Mon off the back of the boat as he was crossing behind the mainsail.

The Italians meanwhile were in full control and stretching their legs on the way to a 200 metre plus (16 second victory) that put them three nil up in the first-to-seven-points series.

Ainslie was quick to admit the mistake in the prestart had cost them the race.

“We made a mess of the start,” he said. “Just got a bit greedy going for the hook when we thought it was on for a split second. With these match race starts you go from hero to zero pretty quick.”

“We got that one wrong but after that we sailed a pretty good race. Hats off to Luna Rossa they did a great job of keeping it tight. Two pretty even boats and two great teams. Whist we came out of it the wrong side of it – and we are not happy about that – it was a good race.”

The British knew they had to come out all guns blazing in the prestart of the second race and there were urgent voices on both boats as the two engaged in a skirmish deep in the right-hand section of the start box.

In an effort to grab the initiative Ainslie crossed the Italian boat’s bow before arcing into a tight gybe turn to head back to the start line. It was a solid move but a mistake by the British crew saw them exit the gybe with way too much heel and that resulted in a heart stopping sky jump which inevitably was followed by a momentous splash down.

Somehow though the British crew managed to recover control and their composure to make a decent split tack start on port at the starboard end of the line, forcing the Italians into a hurried matching tack at the port end.

Pretty soon though the race developed into a carbon copy of the previous one. The Italians were in the driving seat leaving the British struggling to get free off their vice-like grip. Once again there was virtually nothing between the boats in terms of performance but that made it all the more difficult for Ainslie’s crew to conjure up a passing opportunity.

Leg-by-leg the calm and confident Italians eked out their lead, never looking likely to make a serious mistake that would let Ineos back in the game. At the finish it was another Italian victory – their fourth in a row – with the British trailing by 41 seconds when they crossed.

“Today’s racing was all about getting off the line in front – which we did a great job of – and then it’s really just a sort of foot on the throat approach,” he said. “The boys on the handles did an outstanding job. Tack-for-tack we were just gaining every time.

Having suffered four loses in four races – all of them down to unforced errors on board the British boat – a dejected looking Ainslie was putting up a pragmatic front immediately after the racing.

Asked about the sky jump in the prestart he had this to say.

“I don’t know what happened to be honest – we’ve got to go away and look at it,” he said. “We wanted to be aggressive in the prestart. It was quite and aggressive move when we were in a good spot, but we lost control of the boat – which you can’t afford to do.

“At this level you can’t afford to make any mistakes and we made too many,” he said. “So we have to go away and really get our act together for Wednesday and come out swinging.”

Two days then for the British to summon up a stirring turnaround. Can they stop the Italians in their tracks on Wednesday and prevent them getting to match point with two more wins?

Based on what we have seen over this opening weekend that’s a big ask. But the British have been tested before down in Auckland and come back strong. Only time will tell if they can do it again.