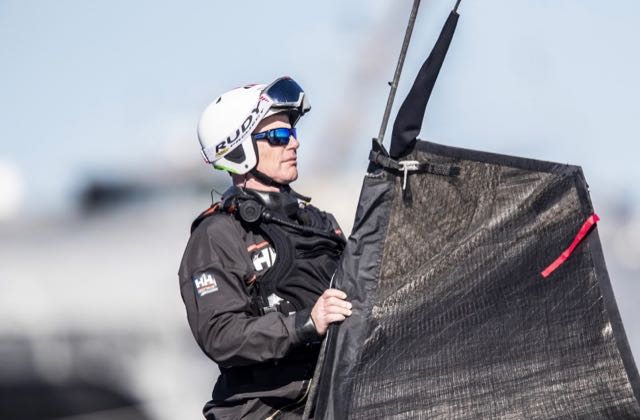 American yachtsman Terry Hutchinson is no stranger to success at the highest level in the sport of yacht racing. The 50-year-old from Annapolis, Maryland has racked up countless world championship titles during his career and has played senior roles in four America’s Cup challenges as well as over the last few years acting as the lynchpin to two of the highest profile professional campaigns – Doug DeVos’ Quantum Racing TP52 and Hap Fauth’s Maxi 70 Bella Mente.

Unsurprisingly perhaps when DeVos and Fauth, along with fellow business titan Roger Penske, pooled their resources to put together a challenge for the America’s Cup with the New York Yacht Club, Hutchinson was their automatic choice to lead the American Magic syndicate.

The America’s Cup is very much unfinished business for Hutchinson who in 2007 made it to the final with Emirates Team New Zealand before being beaten by the Swiss team Alinghi in Valencia. He was named skipper of the Swedish syndicate Artemis Racing for the 34th Cup in San Francisco but chose to step down before the racing began.

“I think when I look around our team, inside of American Magic, it’s unfinished business for a lot of folks,” Hutchinson said in an interview of the latest episode of the Yacht Racing Podcast.

“And so I think we’re all relying on that being part of our competitive advantage as we go forward.”

Hutchinson’s first challenge as leader of the team was to find a way to scale up the winning ethos that had proved so successful in the Quantum Racing and Bella Mente campaigns to the much larger group American Magic was assembling from around the world to try to win sailing’s biggest prize.

“One of the drivers behind the American Magic team is to develop a group of people that understand each other,” he said.

“And given everybody’s strengths and weaknesses, to be able to work through those and really develop a system that allows us to race the boat in a manner where we continually improve upon the day before, or the race before.”

Among the first to be signed up by American Magic were several of Hutchinson’s core team who have worked with him across several campaigns in recent years, including the Quantum and Bella Mente squads – a factor he says helps with getting the culture right.

“Bella Mente is a 30-person team from shore support to the bow,” Hutchinson said. “You grow this team [American Magic] out and we’re around a 100 people, and so developing that culture takes a lot more time. Developing a certain work ethos amongst a multinational team is tricky.

“Good thing is we have time to do that. A lot of our early decision making with American Magic, brought in people that we had worked with in the past so we could circumvent a lot of those relationships.

“What we are aiming to have is an environment where there’s good self-evaluation, so that as you make mistakes you get better.”

Hutchinson intends to fill the tactician role aboard the boat but says he recognised early on that he needed to resist his competitive instinct to want to steer the boat himself. Instead he brought in Kiwi America’s Cup legend Dean Barker the man he raced alongside to win the 2007 Louis Vuitton Trophy at the 32nd Cup with Emirates Team New Zealand.

“The first conscious decision was to step away from fighting the instinct of wanting to steer the boat and work within my wheelhouse of strengths,” he said. “And then also hand those responsibilities off to somebody else who was motivated, who has something to prove, and who is also has the skillset to do that job.”

Hutchinson says he has tried to grow the American Magic team based on that philosophy.

Asked what it is like to sail aboard the American Magic scaled down 38-foot test boat known as The Mule, Hutchinson had this to say:

“The first day that I was on the boat when we foiled it was quite windy and some of the systems weren’t operating perfectly. And so the boat was a bit loose and we were a bit out of control – and that was exactly how it felt. It was almost like getting into a car with my 16-year-old son driving for the first time. Just wondering what could possibly go wrong.”

“As you evolve and as you listen to the communication between Dean and Andrew [Campbell] and Goodie [Paul Goodison] and hear the level of calm that’s in their voice, what you quickly realise is the level of experience that you have and that we have as a team.

“Very quickly you go from nervous anticipation to getting into the routine of just doing your job on the boat. Sitting up in the front of the boat and learning how to go fast, for me it’s a really, really, unbelievable experience. It’s probably some of the most fun that I’ve had just sailing, because the boat is so different.

“The sensation of speed is impressive, and yet I’ve spent the better part of a month now sailing around at 30 something knots, and it’s becoming normal.”

Hutchinson says the American Magic sailors will continue to milk everything they can out of The Mule in terms of learning and raw data collection to feed the design and build process of the team’s first full-size AC75 which is due to be launched in the middle of the summer this year.

“After that we will be slowly working through the process of getting that boat up to speed,” he said. “From there go off to a regatta in late October [the Italian heat of the America’s Cup World Series]. Between now and then we have to decide how we’re going to use our time and what the regatta schedule looks like in 2020.

“In 2019 we have to focus on developing a fast sail boat,” Hutchinson declared. “Then in 2020 we’ll have to work on finding opportunities to go and race, and in a lot of a ways, redevelop the racing skills at high speed.

“But if we don’t have a fast boat, I’m quite certain it doesn’t matter how well we race a slower boat, you’re probably not going to win. So we have to make sure we work hard on developing a fast boat.”