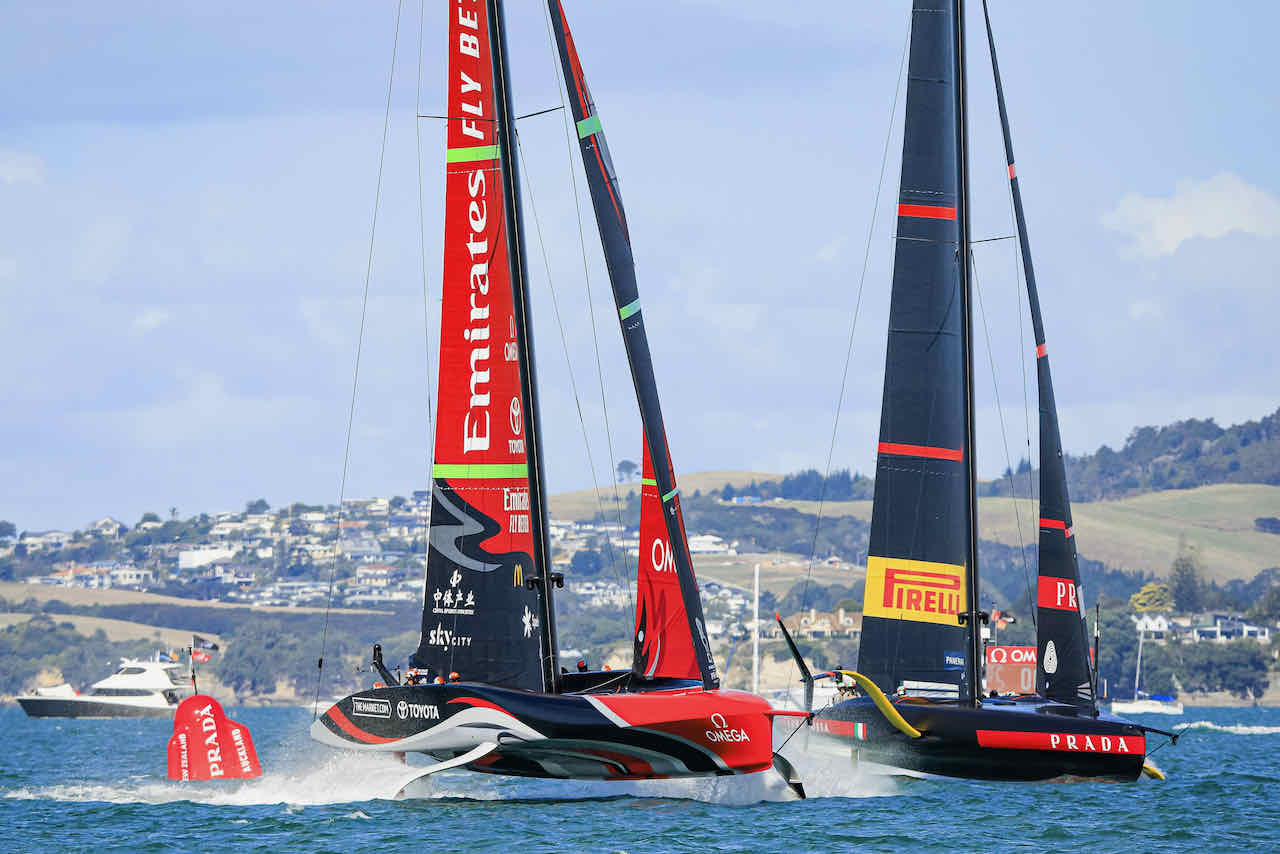 The race-by-race points trading of the first three days of racing in the 36th America’s Cup Match between Emirates Team New Zealand and Luna Rossa Prada Pirelli Team finally came to an end today when the Defender delighted the hometown fans with two victories in light and tricky wind conditions.

After six straight races in which the winner of the pre-start went on to victory, today we saw lead changes in both races, with the Kiwis fighting back twice to claim both the points.

The breathless chatter coming off both boats during the pre-start of the opening race today was a good indicator of how frenetic the boat-on-boat manoeuvring was, as well as the pressure both crews were feeling at being locked at three races each in the series.

Emirates Team New Zealand helmsman Peter Burling wasted no time in taking the fight to his Italian rivals. Seconds after entering the start box from the starboard side he spun the Kiwi boat into a tight, fast gybe that put him right on Luna Rossa’s transom as they scorched towards the right-hand boundary of the start box.

Then, as Luna Rossa’s port-wheel helmsman Francesco Bruni bore away to gybe back towards the start line, Burling threw in another gybe to position himself ahead and to leeward. With 30 seconds to go the two boats were paralleled in high and slow mode close to the committee boat end of the line.

As the boats turned down to accelerate for the start Burling looked like he had got the Italian boat – with starboard helmsman Jimmy Spithill now driving – just where he wanted it. But at the gun the Kiwis were not as advanced to leeward as they would have liked and that enabled Spithill to gauge off to windward and begin to roll over the top of them.

After Burling tried a luff that Spithill avoided the Kiwis had no option but to tack away. The Italians switched in to covering mode to keep themselves between their rivals and the windward gate and at the top of the leg rounded they the right-hand mark eight seconds ahead of the New Zealanders.

At this stage the Kiwi fans were willing their team into making the downwind gains we have seen in previous encounters, but Luna Rossa sailed a solid leg to round the leeward gate still with an eight second advantage.

The second upwind leg saw the decisive move of the race.

The Italians tacked immediately to try to reduce the risk of the Kiwis establishing any leverage on the right, but when the wind flicked hard to the right for a minute or so Emirates Team New Zealand were back in contention for the lead.

When the boats converged bow to bow, the Italians on port tried to tack into a close lee bow position. But the charging Kiwi boat was just going too fast to make it stick and Burling was able to use his pace to surge over the top of the Italian boat and take control of the race.

A series of effective cover tacks over the rest of the leg saw Team New Zealand round the windward gate 19 seconds ahead. That delta was up to 29 seconds at the second leeward gate, and with the wind shifting further and further left there were no opportunities for Luna Rossa to conjure up any sort of comeback.

The Kiwis continued to extend over the rest of the race to take their fourth win of the series by 58 seconds.

Describing the scenario that had enabled them to overtake on the second upwind leg, Burling had this to say:

“I think we got the last right shift of the breeze. We got that favoured right turn at the bottom and the early tack. We were on a massive left phase at that stage and then we got a about a 10-degree right hander that got us a whole heap closer than it could have been.

The pre-start action for the following race was even more intense with plenty of jockeying for position between the two boats on the approach to the line that saw both of them both almost come off the foils in the final minute.

The Kiwis to windward were the first to accelerate and looked to be in control with 20 seconds to the gun. It was the Italians however who did the better job of the final approach and at the gun were equal speed and close enough to leeward to squeeze up into New Zealand boat’s lee and force it to tack away.

At the next cross the Italians were comfortably ahead and they were even more so the next time the boats came together further up the leg. At the windward gate Luna Rossa led around the right marker by 16 seconds.

An early gybe by the Kiwis was matched by Luna Rossa but the Italian boat came out of the manoeuvre somewhat slow after a possible issue with the sheeting of the headsail. This enabled Team New Zealand to close the gap and by the time the boats reached the halfway point they were within just a couple of boat lengths of the leader.

Sensing an opportunity to overtake Burling gybed on to port across Luna Rossa’s transom. Perhaps they gybed into a wind hole or perhaps they were affected by the wind wash coming from the Italian boat, but the end result was they crashed off their foils and were struggling slowly in displacement for several agonising minutes.

Luna Rossa meanwhile was making hay while the sun shone. By the time the Kiwis were flying again the Italian boat half way up the second windward leg – more than four minutes ahead of their opposition.

In normal yacht racing this would be an utterly unassailable lead, but with the wind getting progressively lighter at the top of the course, nothing was certain.

As the New Zealanders began the second upwind leg the Luna Rossa sailors picked their way skilfully through the shifts and lulls at the top of the course. All looked good for them as they approached the windward gate but on the exit from the final layline tack into the right buoy, they let their boat speed drop below the foiling threshold and their boat flopped gently out of the air.

There are no good places to fall off the foils, but perhaps some are worse than others.

Hemmed in by the boundary around the top of the racecourse, the Italians were unable to get close to the hull speed required for take-off. As they drifted along making no progress at all downwind, Emirates Team New Zealand were doing a good job of staying in flight mode as they now approached the minefield that the top of the course had now become.

It was knife edge-stuff for the Kiwi crew who were sailing underpowered with a J2 headsail, but somehow they managed to keep their boat airborne as they rounded the windward gate to head off downwind for the final time.

To give the teams a chance of finishing within the 45-minute time limit the race committee had shortened the course to five legs.

At the finish Emirates Team New Zealand secured their second win of the day – their third in succession – by a margin of over four minutes to take a five to three lead in the series. That puts the Defenders within two of the seven points they require to retain the America’s Cup.

“It’s a big moment for us to get two on the board,” said New Zealand’s flight controller Blair Tuke.

“That’s what we wanted to do today. We maybe made it a bit tougher than it needed to be. The boat is going really nicely, and we feel like we are getting into our groove more and more the more races we do.

“Even though we were on the wrong sail in that race we were still managing to go along just fine. We will keep learning. We made a couple of mistakes still in the pre-start. They weren’t as clean as we would have liked.

“We need to keep charging on. There’s still a couple more to go.”

For the Italians, although losing three races in a row means their backs are now against the wall, they also know they are well capable of striking back.

“We know we can win races,” said Spithill. “As a team we have been in some tough situations before, and the guys will keep their heads up. We will go back; we will try and grow stronger and come out firing tomorrow. We did some things well, there’s obviously some things we have got to go back and tidy up. That’s the way it rolls. Onwards and upwards and we will come out swinging tomorrow.”

Both teams will be trying to manage their emotions tonight. The Kiwis know better than to get ahead of themselves and start thinking about lifting the ancient America’s Cup trophy. In the Italian camp there will be passionate fighting talk about how to channel the frustration of today’s losses into a comeback performance when racing resumes tomorrow, when two more races scheduled in what are expected to be super light winds.