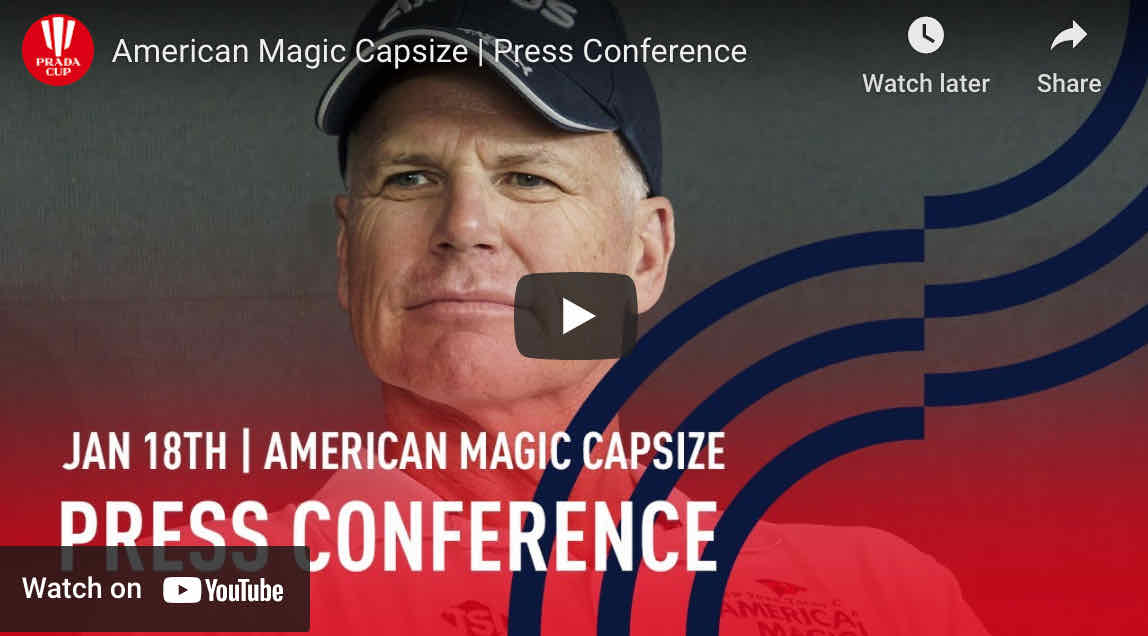 NYYC American Magic skipper and executive director Terry Hutchinson faced the media today to answer questions about the team’s high speed wipe out, capsize and near sinking while racing in the Prada Cup against Challenger of Record Luna Rossa Prada Pirelli.

We have picked the highlights out of what was a characteristically frank and honest interview from Hutchinson in which he reveals what happened on board Patriot in the lead up to the capsize and his own experience of having to use his knife to cut himself out from under the giant mainsail.

On the assistance given to the team to retrieve Patriot

You have to acknowledge the huge support of all the competitors and what they did for us.  Without them it wouldn’t have happened, and we would have been in a much different scenario today, had the boat gone to the bottom.

I think Dalts’ [Grant Dalton, ETNZ CEO] quote was ‘whatever you need, we’ve got it for you’.

On what happened in the lead up to the capsize

We were doing a tack bear away and 40 seconds before we tacked it blowing 12 and a half knots of wind, and when we tacked to bear away it was blowing 23 and a half knots. When you look at the wind graph, the time from 18 knots to 23 knots is about three seconds.

There was a lot of turbulent wind condition yesterday – you know the first leg of that race we did a tack bear away around the right hand gate. You get the boat into a spot where you have to race the boat hard. The boat is very unforgiving and you have to race it [because] you are at as much risk when you pull your foot off the gas pedal as when you have it on it.

The boats by their very nature are at their most controlled when they are going fast. When you slow down from 40 knots to 30 knots, the wind goes aft and all the load in the boat goes up and the boat becomes unstable. So if you have the chance to keep the boat ripping all the time and going as fast as possible, it is at its easiest to control.

We struggled through that manoeuvre because we had a puff at about the same time we were bearing off and we were accelerating. In that exact moment, the runner was a little bit fetched up on the mainsail, the sails were eased and the boat was accelerating. But we were still building up to our top speed and those are the unfortunate consequences of racing that thing in incredibly turbulent conditions.

We have debriefed it internally and we will get better from this situation and work not to make the same mistake twice.

Specifically on the involvement of the leeward runner in the capsize

You can see that it is a little bit fetched up on the mid-stripe We came out of the manoeuvre and the traveller was all the way down at the bottom of the track. It’s easy in hindsight to critique it but that is the first indication that something has the potential to go wrong. Because the traveller is all the way down, the backstay is eased, but what happens next is the mainsheet gets eased and that loads into the leeward runner.

Everything is set on the boat at a setting that has a certain amount of stroke to it … a certain amount of length. When things are max eased – the boat doesn’t sail a lot in that configuration – runners and things like that go tight. I haven’t looked completely at the data to see if the runner was at max ease  – but I would also say that that is not the reason the boat tipped over. It was a combination of a couple of things that led up to that moment.

On plans to return to the Prada Cup

The team is committed to it and when you consider what all the teams have had to endure to get here and to deal with some of the things we have had to deal with over the last three years, it would be a bit of a mistake not to give everything we have to get the boat back out on the racecourse in good working order.

On what caused the hole in the boat; was it a battery or similar coming loose?

If you look at the boat speed through the trajectory of the turn we were going 47 knots. Inside the boat there is transverse structure and then longitudinal structure. The boat popped quite a wheelie, the leeward foil came out of the water, and we got a reasonable amount of bow altitude up. When the boat slammed down … it’s fine if it lands flat on its keel, but if lands on its side basically the structure inside the yacht just guillotined the panel and out it popped.

On his own personal experience after the boat capsized

It was pretty hairball. I was trying to eject out of my spot and we ended up with knives out, cutting our way out. The first priority is getting the crew out and fortunately we were all out, I think probably, within a minute.

[Being trapped] underneath the mainsail is un-nerving to say the least.

On how they stopped Patriot from sinking

We are fortunate that everything inside the boat we have back ups for – that we brought with us form the US. We will use bits and pieces out of Defiant [the team’s first generation AC75] to help rebuild Patriot, and away we will go.

We have absolute confidence in him as a team and there is no-one else we would want on the wheel.

On any damage to the foil cant system

She’s done. So we will take the one out of Defiant and put it in Defiant.

On the boat’s electrical wiring and electronic systems

It’s a complete re-do. That’s going to be a big job. Those guys have a long couple of weeks ahead of them.

On the on-board comms leading up to the mark rounding

Coming up to the mark there was a lot of chat about the right hand mark being favoured. Then you hear Dean saying ‘we should tack, bear away’ and you hear Goodie [Paul Goodison, mainsail trimmer] say ‘it’s a hard manoeuvre’.

Then you hear Andrew [Campbell, flight controller] say ‘right gate by 100 metres, but really light’.  I trust Andrew and Dean – as we all do when we get on that boat day in and day out – with our lives. So when one of those guys makes a comment and you hear it in his tone about being light, you take it seriously.

It is truly one of those games where if you make one mistake and the boat touches down, it doesn’t take the guy behind long to get around you.

So we made the decision to do what we did and in our internal debriefs we will continue to analyse whether it was worth the risk taking versus not. Interestingly Luna Rossa followed us around the left gate so there must have been something to it. When you are sitting there looking at it there was a nice band of wind coming down that side of the racecourse and had we taken the right turn, done a lazy gybe, we probably would have hooked into it and we wouldn’t be having this conversation – but you don’t know that side of the coin.

What we ended our debrief with was: ‘when we make the decision, we make the decision’. We live and die by those decisions and we can critique them afterwards and make sure we get better from it. But there is no reason to over analyse it either, as long as we learn and improve and get better, then that’s what we have to do.

No not at all. I hear all the communication and when we re-watched the race I realised my comms were not necessarily coming out on the complete audio. But you can hear Dean saying ‘Copy … agree …’.

I only see 50 per cent of the race but I have complete faith in Andrew [Campbell, flight controller] – he’s an incredible sailor – and complete faith in Dean and Goodie. I have raced with them enough to know that at certain times my voice is not needed – partly because you are following the conversation and you can hear the logic in it.

If there was a strong enough opinion one way or the other, I would certainly jump in and try to overrule it. But it wasn’t required in that situation and when I look back on it, I don’t think that had I said something completely different … I was seeing what Dean saw: there was a truck load of breeze coming down the left hand side of the racecourse and it made sense to be in that wind to win the race.