Skip to content
You are here
Home > America's Cup > America’s Cup: Strong start for the Americans and Kiwis on ACWS – Auckland Day 1 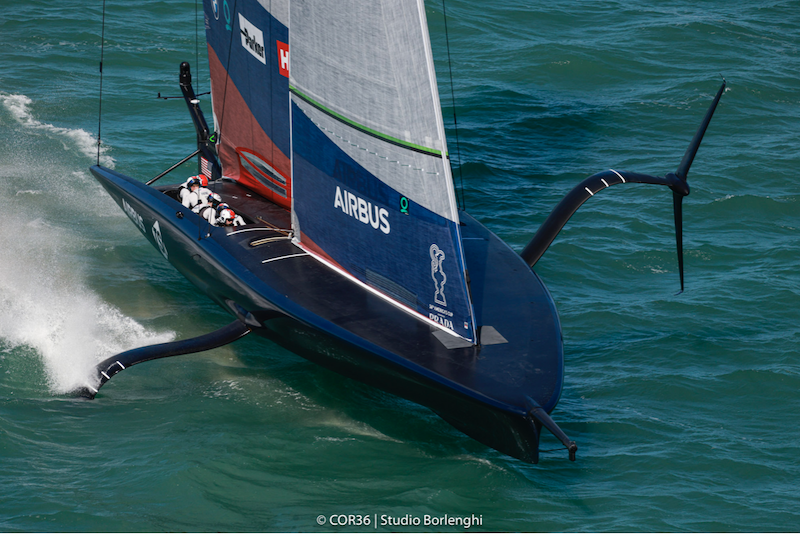 Yacht Racing Life editor Justin Chisholm gives his analysis of the opening day of racing at the long awaited America’s Cup World Series – Auckland regatta. Spoiler alert – all in all, he liked what he saw….

The first ever official racing the 36th America’s Cup has been a long time coming very much anticipated by sailing fans around the world. We didn’t really know what to expect: Would the all-new high-performance AC75s live up to the hype? Would we see nip and tuck racing or less compelling runaway victories? Would we be in for match racing or drag racing on the Hauraki Gulf?

Well in the end we got a bit of everything over the four races on the opening day of America’s Cup World Series – Auckland. Having just watched all four races online and I’m pleased to report that all things considered the event got off to a pretty strong start.

United States challenger NYYC American Magic will no doubt be the happiest crew this evening in Auckland having won both their races to score two points and sit atop the leader board tonight.

Defender Emirates Team New Zealand will not be too disappointed with their day either however, despite losing to the Americans in the final – and by far the best race of day. Their first match up in the opening race of the day saw them give the Italian Challenger of Record Luna Rossa Prada Pirelli a severe and unequivocal thumping that ended with the Kiwis winning by three minute and 13 seconds.

Luna Rossa starboard tack helmsman Jimmy Spithill said after the race that the Italian crew had lost their prestart race data which meant they had to tack away from the New Zealander’s dirty air straight off the start.

“In the end though, they were just better at getting around the corners,” Spithill conceded.

He wasn’t wrong about that. Burling’s men looked silky smooth on every point of sail, rarely touching the hull in the water as the extended on virtually every leg of the course. It was spectacularly impressive demonstration of raw speed and masterful crew work that laid down a clear marker that the home team campaign is in excellent shape.

It came as somewhat of a surprise then when Burling and Co. got off to a lacklustre start of their match against American Magic. The contrast between the two teams in the prestart could not have been more marked. At the wheel of the American Patriot yacht Dean Barker executed a perfect high-speed timed run to enter the box at the port end precisely – and I mean precisely – on time.

The New Zealand boat meanwhile was struggling to get on its foils and only managed a very late entry to the box. After a minor skirmish between the two boats Burling seemed unable to further engage, leaving Barker to pull off another perfect time-on-distance run to the line.

Once they got up and running the Kiwis looked better, but the on-board chatter seemed to indicate they were struggling with some sort of a technical issue. Nevertheless, they hung in there and after minimising their losses – other than a disastrous early tack and splashdown at the first leeward gate – in the second half of the race they began to claw their way back.

A slight overstand by the Americans on the approach to the left-hand mark of the final windward gate gave the Emirates Team New Zealand an inside overlap and as the boats arced around the buoy a penalty was given to the Americans for not keeping clear.

However any disadvantage from that quickly evaporated when the Burling called for a quick – and ultimately slow – gybe which effectively wiped off the penalty for the US crew who were now ripping down the left-hand boundary at full chat.

When the teams came back together the American boat was ahead and a clearly relieved Barker managed a water smile as they scorched across the line 12 seconds ahead.

Not everyone had a good day on the water – particularly the British challenger Ineos Team UK who nearly missed the start of their match against American Magic because of issues with the foil cant system that powers the foils up and down.

The Brits were never really in the race as they did their best to cajole the boat around the course – coming to a full stop on one downwind leg after a big splashdown – and ultimately finished five minutes after the Americans.

Things didn’t get any better for Ainslie’s men in the second race against Luna Rossa, when they got a penalty in the start box for not keeping clear to windward after an aggressive lee bow tack from Spithill. That left them trailing at the start as they tried to get back to foiling mode, but it didn’t matter anyhow as they pulled out on the first downwind after the foil cant system failed again.

“I have had better days,” Ainslie reported somewhat tersely after the race. “But we will get it fixed be back out for a better day tomorrow.” Here’s – genuinely – hoping for that to be the case.

So American Magic have perhaps the most to smile about tonight as the only undefeated team on the opening day. But for me the big news of the day is the clear speed and handling advantage the Defender has at this stage. Even when they were not 100 per cent in the last race of the day they proved capable of fighting for a win.

“It’s pleasing that you can make that many mistakes and still have a nudge at it in the final stages,” summed up Burling after that race.

It was a good day too for the America’s Cup media team. The mix of aerial camera angles and onboard footage was really excellent and Ken Read and Nathan Outteridge did a great job in the commentary box, backed up well by Shirley Robertson on the fast camera cat.

Looking forward to the second day of racing tomorrow.