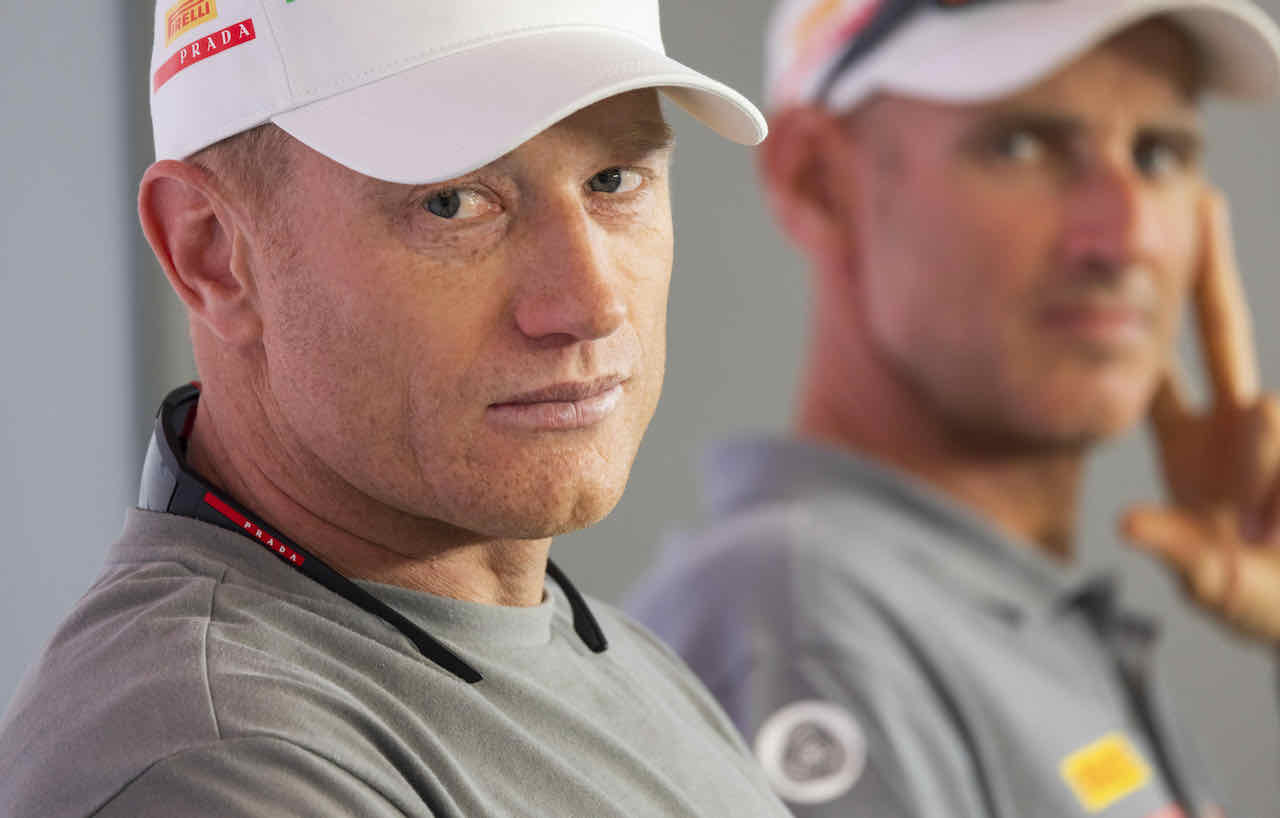 There may be a pause in the on the water action at the 36th America’s Cup down in Auckland, New Zealand, but that doesn’t mean there has been a let up in the intensity of the competition between the two remaining Challengers, Ineos Team UK and Luna Rossa Prada Pirelli Team.

When it comes to the America’s Cup you are never ever not racing. Every opportunity to put one over on your opponents or to somehow get in their heads could pay rich dividends further down the line.

Nobody in the America’s Cup world knows this better than two-time winning skipper Jimmy Spithill, who over the years has attained Jedi Master-level skills in the subtle – and sometimes not so – art of America’s Cup mind games.

Way back in the summer of 2013 I sat in the press conference room at the 34th America’s Cup in San Francisco as the international media pack fired uncomfortable questions at a beleaguered Spithill whose Oracle Team USA squad had lost six out of seven races and were looking down the barrel of a crushing defeat at the hands of Emirates Team New Zealand.

One journalist asked how he and his team could find any motivation given their clearly desperate situation. The room went silent as Spithill grimaced for a second before shifting in his seat and giving this unexpected answer:

“I have been involved in some big fight backs, you know, with some big challenges and facing a lot of adversity, and that would be the sort of thing I would love to be involved in. I know I speak on behalf of all the team, that’s our motivation going into the rest of this series. We feel we have got just as much chance to win this and we are going to do everything we can.”

Watching that clip again now with the benefit of knowing all about Oracle Team USA’s stirring turnaround that ultimately saw the US syndicate retain the America’s Cup, it seems almost like something written for the predictable ‘big ending’ to Hollywood sports movie. Where the coach/captain/quarterback delivers a stirring locker room speech that galvanises the team to a tear-inducing second half/final quarter comeback.

But back in 2013 as I watched Spithill speak, I clearly remember thinking: “Fair play Jimmy, good effort trying to talk up a turnaround, but it isn’t ever going to happen”.

The truth is though that Spithill wasn’t trying to convince me or any of the other journos packing the room. His words were targeted at only one person – his opposite number on the wheel of the Kiwi catamaran, Emirates Team New Zealand skipper, Dean Barker.

During the press conference Barker seemed outwardly unaffected by Spithill’s words. He sat staring dispassionately and expressionless throughout, seemingly not registering anything that his rival was saying. But the phrase ‘imagine if these guys lost from here’ must surely have begun to echo around in his subconscious. 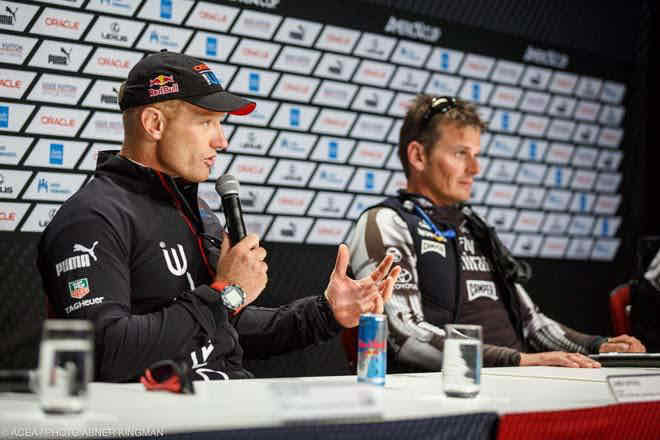 Whether that press conference marked a turning point in the American team’s fortunes at the 34th America’s Cup is impossible to say. But it does ably demonstrate Spithill’s considerable prowess in using mind games to sow seeds of doubt in the minds of his opponents.

No surprise then that we saw a new and invigorated Jimmy Spithill at the post race press conference following Luna Rossa’s semi-final win against the US NYYC American Magic syndicate last weekend.

Despite the semi-final being a 4-0 walkover for the Italians against an evidently still shell-shocked American crew sailing a highly compromised and uncooperative boat, Spithill was keen to amp-up the significance of the win.

“Ineos next boys,” he called out delightedly over the on-board comms as he repeatedly slapped his hand on the deck of the Italian boat as it crossed the finish line of the last race.

He was still fired up when he arrived at the post-race press conference that night, where he missed no opportunity to wipe the slate clean of the list of many criticisms aimed at the Italian team after losing to the British the week before.

“We had a good preparation coming into this,” Spithill said. “The shore team has been relentless along with the designers and engineers. We really pushed hard to try to improve our performance.”

“From the sailing team side – for Cecco [Francesco Bruni, co-helmsman] and myself, and the rest of the guys – we were pretty disappointed, to be honest, in the way the racing was going against the British. It was fantastic racing, but we felt we left a lot on the table and we had to be very, very critical and spend some time with our coaches and really go through it.

“We were candid and pretty critical about what we wanted to improve. Between myself, Cecco and Pietro Sibello (who I think has done a huge step forward and sailed a fantastic regatta) we have got a really candid relationship where we can really call each other out and discuss ideas. The end result is that you get stronger and you get better – and that’s what it it’s all about in a team environment like this.”

No opportunity to telegraph the “We are coming for you!” message to Ben Ainslie and his cohorts went unexploited, including – arguably – a little casual racism in the form of a historically derogatory term to describe the British team.

“I think we have made a good step there – but there’s still a lot more to go. So we will definitely be going back through this series to try and improve the boat and the way we are sailing it and making decisions so we can come out firing against the British.”

“It’s exciting times for us, we know there’s a lot more on the table and we’ll be doing everything we can to come out and get some payback on the Poms,” he concluded one answer.

But now that he had brought the British up, the media wanted to know how Luna Rossa would be able to catch up on the development time the Brits had been enjoying while the Italians were embroiled with the Americans.

Time to spin the fact that Luna Rossa needed two goes to get into the Prada Cup final as a major positive.

“The British have also been out there working hard,” Spithill acknowledged. “We have been fortunate enough to be racing – and I believe we needed that series. I actually think it was an advantage going through this series, because we are a lot stronger for it.

“Then you look at the racing we had against the British – it was pretty good racing, head-to-head, two teams, pretty competitive, both had opportunities to win. But I believe we have had the best preparation leading into this Prada Cup final.

“You can always get better and the best way to do that is to go against tough competitors and real racing. That’s what really exposes you.

“The racing we had against these guys [NYYC American Magic], the pressure we had to face internally, [for] the entire team going into this sudden death – that’s about as good preparation as you can get.”

That issue successfully taken off the table, now it was time to lob a carefully crafted psychological hand grenade at the British squad by reminding them of their dire performance during the America’s Cup World Series warm-up event in December.

“We know they are a tight outfit,” Spithill said. “They have done a great job in turning around where they were in the Christmas Cup.

This was followed a further ramping up of tensions by way of a thinly veiled assertion that the Italians were somehow out for revenge after losing every race to the British in the round robin series. Neither team will be underestimating each other. We will be putting the hammer down – we want payback from the round robin series,” Spithill said.

Let’s be clear here though, although most of what Spithill is quoted as saying are transparent mind games aimed at startling the horses in the British camp, none of what has been highlighted above is in any way under hand or against the rules.

The America’s Cup is an ultra-high stakes competition contested by extremely well-paid professional sportsmen. Big money and easily bruised reputations are on the line and so it would be naïve of us not to expect such tactics to be deployed at this stage in the competition – particularly by someone in Spithill’s position, who has just one more hurdle standing between him and a place in his third America’s Cup Match.

If he makes it that far who knows what might happen?

Maybe, just maybe, he could right the wrongs of his painful defeat against the Kiwis at the 35th America’s Cup in Bermuda by lifting international sport’s oldest trophy above his head for a record breaking third time.