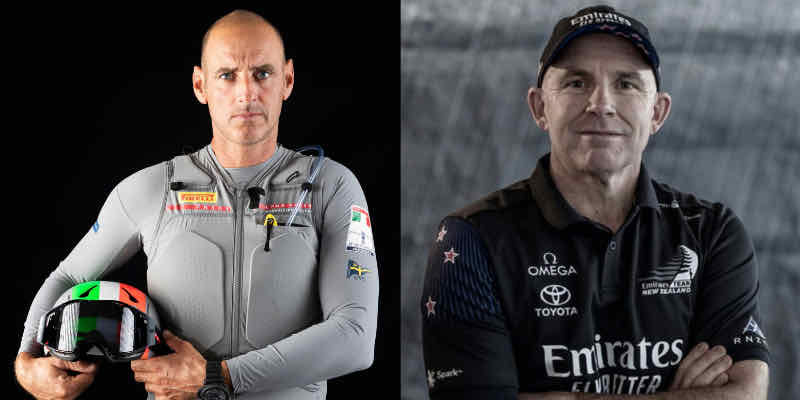 With the opening races of the 36th America’s Cup Match now just days away, Shirley Robertson previews the two boat showdown in another two part podcast from the heart of the action in Auckland New Zealand.

Robertson kicks off Part 1 of the podcast with an interview with the port side helm of the successful Challenger, the AC36 Challenger of Record, Luna Rossa Prada Pirelli Team’s Francesco Bruni.

Bruni has been at the forefront of the Italian team’s significant improvements in performance over this campaign, and is both realistic and candid as he discusses their Prada Cup win. He attributes much of their success to the calm and level head of co-helm, Jimmy Spithill and is both respectful and hopeful when quizzed about their Cup opponents, Emirates Team New Zealand.

“We know they’ve ben pushing a lot their package for speed, they have small foils, a small rudder, sometimes they lose control a bit because of that. They are not unbeatable I think but they will definitely be hard opponents to be sure. And they have experience, their whole campaign, package , people, experience I think is the biggest asset they have.”

Following on from the discussion with Bruni, Robertson talks to Emirates Team New Zealand super coach Ray Davies. Davies is a mastermind of the new world of Cup racing, and has been a proud member of the Kiwi outfit for almost two decades.

The gossip around the harbour side in Auckland of late has been of the team’s sensational speeds out on the water and Davies is quick to dispel any chat that the team are anything but race ready.

While the Challengers have all been fighting out against each other, the Defender has been clocking up the training miles out in the Hauraki Gulf, and as competition draws near, Davies is clear on how pleased he is with the team’s progress.

“We just get more comfortable all the time now, sailing in breeze. With these type of boats you get a little nervous when you hit that fifty knot mark, but now it’s just standard but once you get comfortable with that, you’re just looking for more and more.

“The guys are doing an incredible job, sailing the boat, but once you know the limits of the boat and the boat’s working well then you can just push harder and harder.”

Both Bruni and Davies discuss their thoughts on their respective opponents, their thoughts on how the racing has been to date, and how and where the match may be won and lost. Ahead of the first to seven wins match, it’s an insightful listen to augment enjoyment of the upcoming broadcast.

The pair discuss the performance of the three Challengers, before being joined by special guest, David ‘Freddie’ Carr. Freddie, a one time Extreme 40 team mate of Robertson’s, is the lynch pin of the Ineos Team UK grinding unit, and still sore from the Prada Cup Final exit, is candid and honest as he talks about the performance of the successful defender, Luna Rossa, but also about the British team’s rollercoaster Challenger Series as they bounced back from serious hardware issue heading into the regatta.

“We then had about a week to figure out how to sail this modified boat… As soon as we put the boat back in the water, after the designers figured out the problem…we knew we were back in the game!”