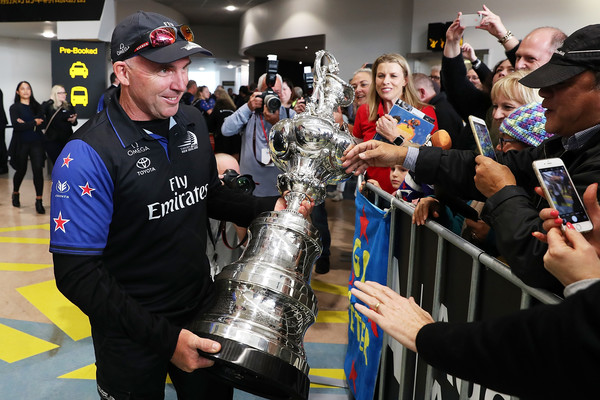 In the concluding part of our exclusive interview with Emirates Team New Zealand sailor/coach Ray Davies we discuss the team’s ongoing approach to innovation, shine a light on the rumoured issues with the AC75 foil arms, find out what Davies thinks of the rival SailGP circuit, and discover his thoughts on how the two newly-announced challengers will shape up.

YRL: For the last Cup your strategy in terms of innovation – as Glenn Ashby put it – was to “throw the ball as far as you could and see if you could get to where it landed”. Is that still the case this time around?

RD: I think we have seen that in terms of this design of boat where I feel like in terms of innovation for sure we have thrown it out there. As far as we are concerned the America’s Cup ties up all the best designers in the world and we think the philosophy should be to keep pushing the boundaries.

This is an amazing, exciting sport now and we have seen at the events in San Francisco and Bermuda that these flying boats can be incredibly exciting and we wanted that to continue [for the 36th edition] in Auckland. We feel like this new concept of boat nails that on all fronts.

We have had great feedback from the other teams that this concept is incredibly difficult and challenging but there are amazing rewards when you get it right. I think that really fits the bill for our vision for the America’s Cup.

YRL: Can you shine any light on the rumours of problems with the foil arms/foiling systems?

RD: Yes I can. There have been some problems with the foil arms themselves. If we rewind a little bit – with the new design there a few one-design components that had to be built and so we decided to spilt the responsibilities for those parts.

Team New Zealand took on the foil cant system for the actual mechanics of moving the arm up and down. That seems to have gone quite well and we have positive feedback from the teams.

Luna Rossa were in control of the foil arm itself and when we tested those foil arms they did actually fall below the design spec. So that was quite a setback in that area. But all the teams got together and had a series of meetings on what was going to be the best design for that foil arm going forwards.

The Team New Zealand engineers have sort of front-footed that and we have come up with a new design. So we have binned the old design and all the teams now agree on this new structure and build method.

It has set us back a few months back for sure but breaking foils in the America’s Cup is not new – we did it in the last campaign – and we are pushing the boundaries on all these items. So it was a setback but not a major one – we can overcome it.

But now the other thing that has happened now is that we have had a couple of more teams come on line, so there could be a couple of flow-on effects as far as the scheduling is concerned for next year.

We are working hard to make sure we make the right decisions so that the teams and the boats can be ready to race safely. It’s important that all the teams get time to get to grips with this new concept of boat. Eleven crew is a lot of crew and certainly we are going to be pushing these boats blooming hard.

So yes, the rumours are true and there was a setback. This is what happens when you push the boundaries of design – and if you don’t do that the boats will be slow. We are working our way through the solution and the problem has been resolved. The new boards are under construction now and we will see how the next 12 months plays out.

YRL: Deviating slightly from talking about the America’s Cup what are your thoughts on the new SailGP circuit which is launching in 2019 using the modified versions of the AC50 catamarans?

RD: I think it’s great. It’s fantastic and good on [Russell] Coutts and Larry Ellison for pushing the sport in this direction and really supporting this type of [high performance] sailing [based around] innovation and technology.

It doesn’t affect the America’s Cup – we’ve got enough entries – and it almost supports this whole sort of boat and [high] speed [type of racing]. So good on them for doing it and good on Larry for putting his money where his mouth is.

But really it doesn’t affect us at all. The America’s Cup is always going to be the pinnacle.

YRL: let’s talk a little bit about the challenging teams – one of which you are going to have to face in the final of the 36th America’s Cup. The list now totals five teams with two newcomers recently – the Malta Altus Challenge and Stars & Stripes Team USA – what are your thoughts?

RD: It’s all very exciting. It’s pretty obvious that we really want this to be an amazing event and it’s great to get the numbers up. We are working through the numbers right now with both those teams, but it looks like they will both get one of our boat one design packages. We will work pretty closely with them to make sure that they are on the start line with a good boat and we are just right now talking through the details of how that transpires.

They both have their own design teams as well so it’s not like you are going to see a mirror version of Emirates Team New Zealand, they are going to develop their own boat as well. So we will help them to get up and running and then they will take the ball from there.

YRL: Is there a danger that we will see a two-tier system in this next America’s Cup with the ’super teams’ like Emirates Team New Zealand and the original five challengers – Luna Rossa, INEOS Team UK, and NYYC American Magic – and then a second tier of the smaller later teams who buy a design package from you? Is everyone going to be on a level playing field here?

RD: We are one a level playing field because a lot of the rule is very tight within this new design and there is not a massive amount of wriggle room. So even though it is an incredibly quick high-performance boat, there is not a huge amount of scope with the design – there’s a lot of finesse and a lot of detail. I honestly think it is still open for a new team to come along and put the time on the water in to understand the boat from a sailing perspective and that is going to give a massive reward.

There is plenty of time for these new teams to get their boat, get on the water and get comfortable with actually racing it around the course. The gains you will see there are bigger than what you would get by spending more time and money on the detail. So yes, going forward I think it is still very much a level playing field.

YRL: Time is always the most important commodity in professional yacht racing campaigns, so tell us how Emirates Team New Zealand is going to be spending its tike over the next six months?

RD: Making smart decisions and managing a limited amount of time is critical in any America’s Cup campaign.

It’s about being efficient with your time and not having too many crazy projects – you have to be mindful that each decision you make does burn up time, so you have to try to be super-efficient with the decision-making process.

Obviously there is a huge amount ahead of us including finishing this first boat and getting it in the water and getting it commissioned. So as that evolves and changes and [eventually] become clear our scheduling for next year will evolve as well.