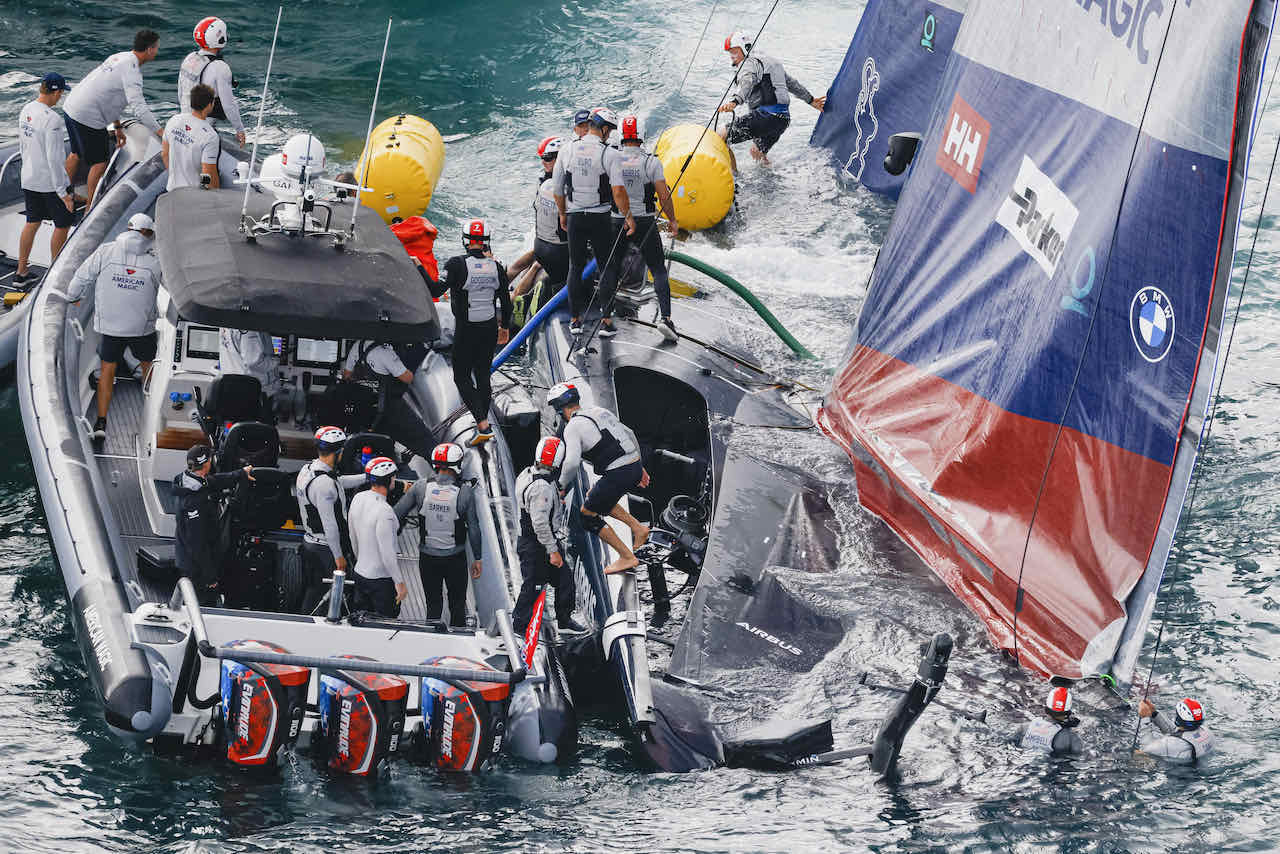 There was huge drama on third day of racing in the Prada Cup as the US American Magic team were left fighting to keep their Patriot AC75 afloat after a spectacular capsize while leading at the final windward gate of their match against the Italian Luna Rossa Prada Pirelli syndicate.

Earlier the British Ineos Team UK squad had extended their unbeaten run to four consecutive races after a win against Luna Rossa in a match that had to be re-sailed when a large squall disrupted the original race.

There has been no shortage of variety in the weather for the first three days of racing at the Prada Cup Challenger Selection Series with the near perfect blue-sky conditions of the first day followed by fickle light wind racing on Day 2 and the fresh-to-frightening conditions for Day 3.

You could have cut the atmosphere with a knife out on Auckland’s Waitematā Harbour as the Italians and the British readied themselves for the opening match of the day under slate grey skies and in gusty winds ranging from 10 to 16 knots.

It was a mouth-watering match up. Luna Rossa had proved themselves impressively quick in the light winds of the previous day and the British were coming into the race on an unbeaten three-race streak.

Racing got away on time – despite the prospect a disruptive weather front which was expected to arrive at any time – and there was drama within the first minute of the pre-start when an unforced error from the British saw them collect an unnecessary boundary penalty.

That meant they had to trail the Italians off the line and left the British crew on the back foot for the first lap and a half as they fought to try to stay within striking distance of Luna Rossa.

They were beginning to close the gap on the second half of penultimate downwind leg when the first effects of the weather front began to be felt by the teams.

“It’s going to go 90 degrees to the left in the next minute,” was Ainslie’s urgent comment from the wheel of Britannia, as the two teams tore towards the left hand (looking upwind) layline for the leeward gate.

In front of them the Italians slid off their foils as the breeze faded ahead of the shift, allowing the Brits to surge past and gybe for the gate from way beyond the original lay line.

With Ainslie unsighted on the port wheel, Ineos tactician Giles Scott had to talk him through an urgent bear away and gybe to round the port lay line. Luna Rossa – still off their foils – followed around the same buoy 40 seconds later.

Meanwhile the race committee were tracking a thirty-knot squall ripping down the course from the left-hand side. Seconds later they abandoned the race having made the sensible decision that conditions were no longer conducive to fair racing.

It is always a tough call for a race director to stop a race midway through, but Iain Murray’s decision was well rewarded with an absolute cracker of a battle when racing resumed 45 minutes later after the front passed through.

There appeared to be a degree of caution from both crews as they entered the pre-start box in 16 knots of breeze and a bumpy sea state. The Italians tried for a port starboard penalty call on the Brits as the two boats tore past each other on opposite tacks with under a minute to go. That got rejected but left the UK crew with no option than to trail Luan Rossa into the starboard end of the start line.

Coming off the line on the starboard hip of the Italians Ainslie had an uncharacteristic moment of hesitation as he initially called for an early tack away and then opted to hold for quite a while before eventually tacking away.

The right was paying on the first part of the beat and when the boats converged for the first time Luna Rossa on port had to take Britannia’s transom. But there was more right-hand shift to come and by the windward gate the Italians were back in front ¬– but only by 10 seconds – as the teams split right (Luna Rossa) and left (Ineos).

Ineos had ground three seconds off the Italians’ lead by the leeward gate when the two crews split again with Luan Rossa choosing the left and the British going right. The Italians got nicely in phase with a series of right-hand shifts to pull away on the first three quarters of the leg. However, the British refused to fade away, and at the end of the beat tactician Giles Scott called for them to dig in hard to a left hand shift close to the left boundary.

When they tacked on to port they were bow-to-bow with the Italians and after a thrilling close quarters cross by Luna Rossa, the two teams went around opposite windward gate buoys in a zero second dead heat.

When the first downwind cross came the Brits were ahead and by the leeward gate they were 26 seconds ahead. The final beat saw the British give up some of their lead to avoid giving the Italians any chance to separate and grab any leverage. At the final windward gate the British were ahead – but just by 10 seconds, and one mistake by the Brits would hand the race to the Italians.

Cool heads prevailed on board Britannia however and Ainslie and Scott were in perfect harmony as tactician and helmsman to step their way down the final run to take a comfortable win to extend their winning streak to four out of four.

The UK’s continued dominance should have been the big news story of the day. but that was massively eclipsed by a spectacular capsize from American Magic as they tried to round the final windward gate in the lead after a thrilling race again Luna Rossa.

Both teams had seemed a bit out of sorts during the pre-start, with each entering late and immediately engaging in port/starboard encounter that saw American Magic penalised but both boats off their foils. The Americans trailed off the line but not by much and at the windward gate they had squeezed ahead by six seconds. That delta had doubled at the leeward gate and by the second windward gate the US crew were ahead by 27 seconds.

As the teams ripped down the penultimate downwind leg the darkening skies heralded the imminent arrival of an intense rain squall. It finally hit as American Magic closed in on the left-hand windward gate. Voices on board were tense as helmsman Dean Barker called for a tricky tack and quick bear away into a gybe manoeuvre.

The rain was pelting and the breeze had ramped up dramatically as Barker turned the boat into the tack and began to bear away. At this point disaster struck, as the leeward runner appeared to have not been released, sending the boat into a huge sky jump, followed by a crash down that ended inevitably in a slow capsize.

The American support boats were there in a flash to begin the righting operation, but as the boat came upright it was heavily waterlogged and in urgent need of pumps to keep it from sinking. Soon after, support boats from the other teams joined in the efforts to keep the American AC75 afloat.

At the time of posting this report the efforts were continuing to keep the boat afloat in 12 metres of water but it was unclear if they were going to be successful.

UPDATE: Read the American Magic team statement regarding the successful retrieval of their AC75 Patriot.

UPDATE: American Magic skipper/tactician Terry Hutchinson speaks about the capsize and plans to return to the Prada Cup competition.