Skip to content
You are here
Home > America's Cup > America’s Cup: Prada Cup Round Robin 1 Day 2 – Italians and British win out over US 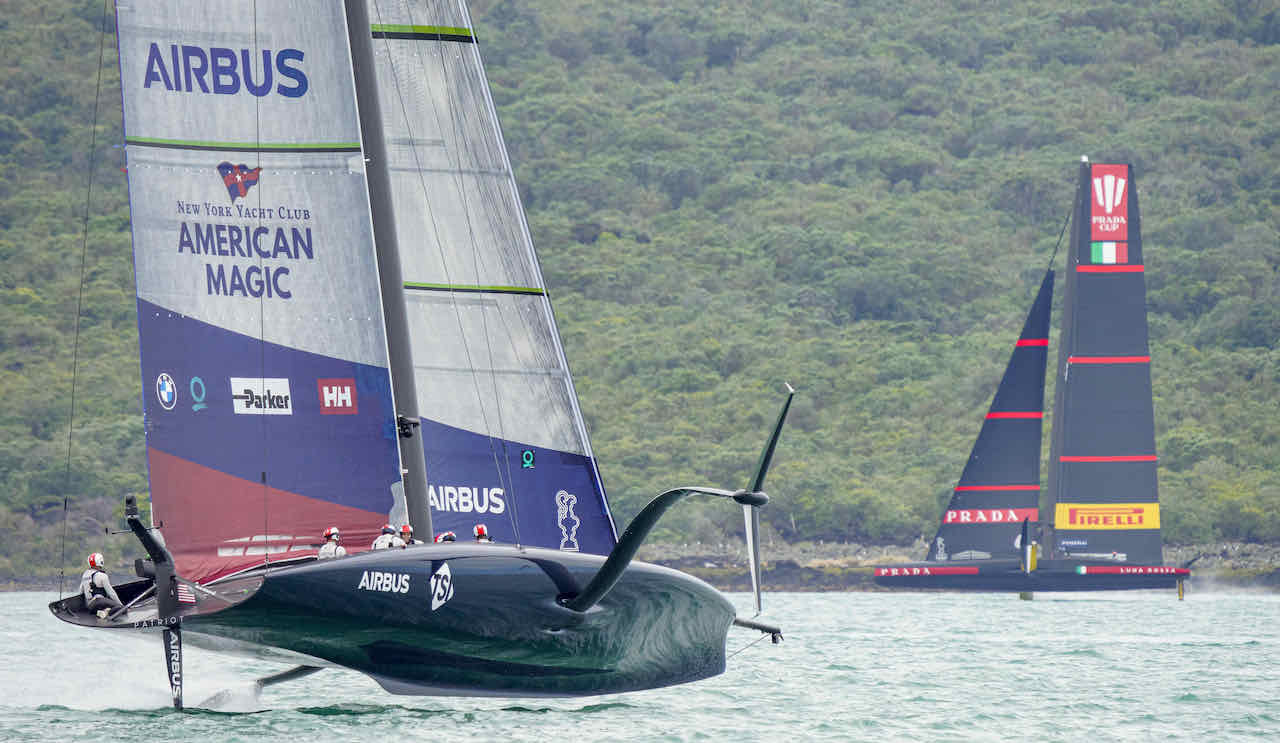 The light and patchy wind conditions that prevailed for the second day of racing in the Prada Cup Challenger Selection Series made life difficult for the crews of the foiling monohull AC75s who were forced to tiptoe their way around a racecourse strewn with swirling micro gust and rapidly expanding wind holes.

First to face the fickle conditions were the Italian Luna Rossa Prada Pirelli Team and the US NYYC American Magic syndicate. With the wind starting to fade as the prestart began the Italians made an uncertain entry to the start box and were slow enough to tempt Dean Barker into dialling down on starboard to try for a penalty. The umpires had a good look at it but ultimately rejected the call.

Soon after, both boats dropped off their foils and the match racing ended as the crews turned their full attention to getting their boats back airborne. The Italians made it into the air first to lead off the line with the Americans trailing by around 30 seconds. Although both boats were foiling for the first half of the beat the breeze was becoming more and more patchy as the leg went on. Tacking became a precarious manoeuvre and you could feel the nervousness of the helmsman as they tried to coax their boats to stay a up out of the water as they made the turn.

Luna Rossa made the best of the conditions to stay in the air as they rounded the left-hand buoy of the windward gate but were soon in displacement/foil drag mode and sailing back up wind as they hunted for enough wind to take off. Meanwhile American Magic struggled their way to the windward gate to be rewarded with a puff of breeze that got them airborne and heading quickly down wind.

By around the halfway stage they were ahead of the Italians again. But it was not to last for long, as the US boat failed to stick a critical gybe at the left-hand boundary and flopped back into to water, drawing a heavy and frustrated sigh from helmsman Dean Barker. Seconds later things went from bad to worse for the Americans as the Italians popped on to their foils and were able to stay up through their gybe at the right-hand boundary. Seconds later they surged past the US boat at 30 knots to pull out a 60 second lead by the leeward gate.

With the race already shortened to four legs the next beat was all about who could keep going fast enough to stay foiling – nothing else mattered. Some silky skills from the Luna Rossa crew saw them pull off multiple tacks to squeak their way up a narrow sliver of breeze that got them all the way to the windward gate.

Approaching the left-hand buoy we learned a new manoeuvre code word as Jimmy Spithill called for a ‘Chicago’ rounding. Quite how it earned this name is not clear, but the move involves gybing while keeping both foils in the water for longer than normal.

Happily for all concerned, by way of a series of these gybes the Italians were able to ride the same sliver of breeze they had used upwind to send them down the final leg and across the finish line for the win.

A dejected Barker described the fickle conditions as “a lottery” in a post-race interview. He was not wrong – there was a random aspect to the wind for sure – but the painful truth is that the Italians had proved better at dealing with the light air scenario than the American crew.

There was a calm, assured look about the two helmsman Francesco Bruni and Jimmy Spithill whose voices remained calm and level when they were off the foils as they reasoned out how to get back up. From my perspective they were better prepared to deal with the frustration of the light airs and each time the boat dropped into the water they quickly and calmly switched into a seemingly well-rehearsed routine of steering and sail trim to get the boat back to take off velocity.

After struggling terribly in light conditions in the America’s Cup World Series – Auckland regatta in December all eyes were on the British boat in the lead up to the second race of the day today against American Magic to see how they would fare. Would the dramatic performance improvement we saw yesterday in fresh conditions be replicated in the light? We got a big clue came when the Brits declined the option of a tow on to their foils before the race, opting instead to get themselves airborne under their own power.

The Americans meanwhile did take the tow but looked utterly discombobulated on their approach to entering the pre-start box. In trying in vain to avoid an early entry they crashed off their foils. With 40 seconds to go they were still dead in the water and could only sit and watch as the British had carved a high-speed loop around them on their way to the start line.

The Ainslie and Co. were halfway to the windward gate before the Americans got foiling, but when the British boat glided to a halt in a windless zone at the top of the course the US crew were soon right back in contention. Critically, the UK’s Britannia managed to squeak around the left-hand buoy and point her bows downwind in VMG rather than foiling mode. The USA crew slid around the right-hand buoy and for the next several minutes we were treated to some old school displacement mode sailing as both crews got their heads out of the boat to try to sniff out the new breeze.

Each of them got airborne and made gains at various points but it was the UK crew that looked more comfortable making the transition from displacement to foiling. When they reached the leeward gate on foils and shot off upwind while the Americans were still in low mode, they were now racing the time limit clock rather than their opponents.

In the end they ‘joined the dots’ between wind bands on the final downwind to stay foiling and beat the clock by two minutes for their third consecutive win.

There will no doubt be plenty of spectator criticism of the type of racing we have seen today. Some will agree with Dean Barkers assessment that the day was a lottery that is not worthy of the America’s Cup. That may or may not be true, but let’s not forget the masterclass demonstration of light airs sailing that we witnessed from the two winning crews. Spithill and Bruni, Ainslie and Scott – in the face of monstrously frustrating conditions, both pairings remained calm and focused on the task at hand. For that they deserve our respect and our admiration.

In regard to the big question of the day – whether the British have fixed their light wind woes – it certainly seemed to me that they were hugely more comfortable than when we saw them at the America’s Cup World Series – Auckland and the Christmas Cup. Their skipper Ben Ainslie said after the second race today that he still was not sure. He credited the teams third win out of three races to smart sailing and staying in the breeze rather than a performance gain.

Well Ben can be cautious if he likes, but for me, three wins out of three across a range of conditions means only one thing: The British are back.

Meanwhile, the Italians will be looking to build off their light wind legends reputation to improve across the wind range; while the Americans will need to spend the evening licking their wounds before they get back in the ring tomorrow for the final day of this first tranche of Prada Cup racing.