Skip to content
You are here
Home > America's Cup > America’s Cup: Prada Cup Round Robin 1 Day 1 – British stun Americans & Italians with back to back victories 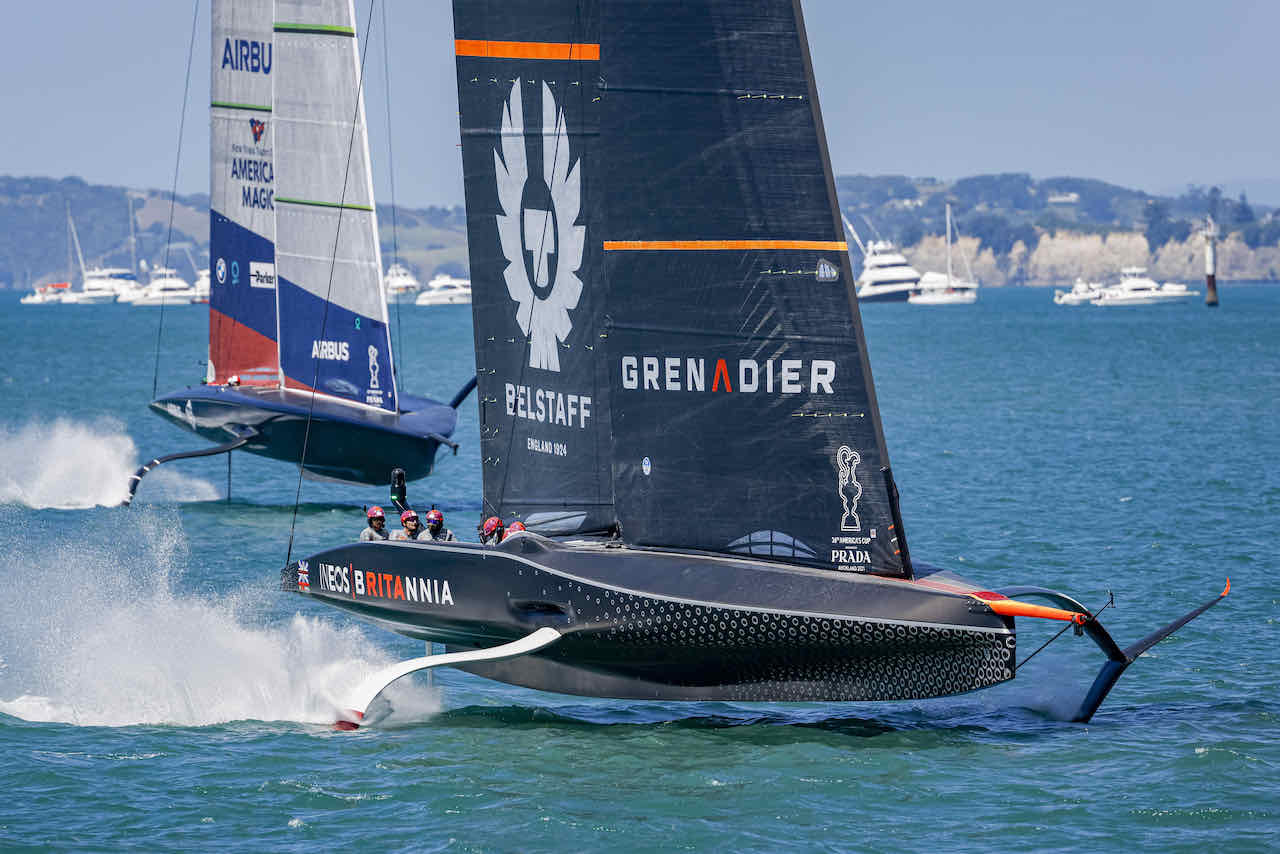 After so many years of waiting for the start of racing at the 36th America’s Cup, sailing fans around the world were on the edge of their seats today for the opening day of racing at the Prada Cup – the Challenger Selection Series.

But they got what they came for with two cracking match races, which saw a much-improved Ineos Team UK defeat both NYYC American Magic and Luna Rossa Prada Pirelli Team. Here’s how Yacht racing Life editor Justin Chisholm saw the action play out…

Based on the form guide after the America’s Cup World Series – Auckland warm up regatta when the British Ineos Team UK failed to put a point on the board the opening race between them and the US NYYC American Magic syndicate looked like an easy prospect for the Americans.

Ben Ainslie and his star-studded crew had different ideas, however. According to an interview with tactician Giles Scott earlier in the day, Ainslie was reported to be “all-fired up” before leaving the dock, and it was a single-minded and determined-looking Ainslie who appeared on the on-board camera at the wheel of Britannia in the pre-start.

With Scott feeding a constant stream of information about the location of the American boat Ainslie chose to duck Dean Barker’s stern on port in the final minute in order to line up behind and to windward for the final approach.

That gave the Brits a narrow advantage at the start as the pair headed towards the left-hand boundary. Barker did his best to squeeze Ainslie off, but the British skipper held his nerve and his lane until close to the boundary. Once on port the British boat looked the faster and could take advantage of a progressive right-hand shift on the way up towards the windward gate close to North Head.

The British rounded the right-hand buoy with a nine second lead over the Americans who took the left buoy. It was immediately apparent that the Brits were enjoying significantly more breeze on the right of the course (looking upwind). “Good breeze here Ben, get her ripping,” Scott was heard to say to Ainslie at one point. And that he did, with Britannia’s jet-black hull scorching down the run to round the leeward gate 19 seconds ahead of American Magic.

The next upwind was Scott and Ainslie working in perfect harmony as tactician and helmsman as they picked their way upwind through the headers and lifts on the favoured right-hand side of the course. The Americans were left with no options to attack and so had to be satisfied with following in the hope of a mistake from Ainslie and Co.

By now the British were brimming over with confidence and apparently throwing in gybes at will. If ever there was an exorcising of the ghost of their lacklustre ACWS – Auckland performance then surely it was the faultlessly slick ‘JK’ manoeuvre – a roundup and immediate tack at the leeward buoy (named for John Kosteki who made it infamous with Oracle Team USA in the San Francisco America’s Cup final – that they pulled off at the final leeward gate.

That set them up for another strong upwind leg and saw them power around the right-hand mark of the final windward gate with a one-minute-and-eight-second lead. There were no mistakes from the Brits on the final downwind and they tore across the finish line to claim a one minute and 20 second win.

It was a remarkable turnaround in performance terms and a stunning victory for the British crew. But there was little in the way of celebration from Ainslie – just a straightforward “That was a better one” before he and the crew reset their minds for the next race against Italians following on immediately afterwards.

If the Italians had been pre-warned of the Brits new found potency after watching them dismiss the Americans, they quickly found out for themselves when Ainslie and Scott took control in the final minute of the pre-start.

As the two boats converged with the Brits on port and the Italians on starboard Scott held Ainslie from tacking too early in front of their rival. “Five seconds to layline,” he implored, and Ainslie held on just long enough to tack safely in front and avoid giving Italy’s starboard tack helmsman Jimmy Spithill an opportunity to hook him to leeward.

A left shift meant both teams were going to be late for the start but Ineos was able to tack on to port first to lead across the line with Luna Rossa slightly to windward and behind.

The British crew immediately got themselves into fast mode and were able to force the Italians to tack away to the lighter winds on the left of the course.

When the boats converged again further up the beat Ainslie slammed a solid cover tack in, prompting Scott to comment “He’s nicely in your dirt”. So much so in fact that Luna Rossa were forced to tack away again, but this time to the right where they ended up benefitting from a little more breeze.

At the first windward gate Ineos led around the right-hand buoy, with Luna Rossa following them around just 15 seconds later. But it was a slower rounding from the Italians who were slowed by a slight touchdown. When the British boat reached the right-hand boundary (looking upwind) and gybed, Luna Rossa gybed at the same time.

Somehow the British always looked to be in marginally better breeze and were able to extend their advantage to 22 seconds at the first leeward gate where they slickly executed a round up and immediate tack manoeuvre.

With the teams separated by the width of the course on the second upwind leg – Italians on the left and British on the right – Scott called it as “a big gain to us”. However when the boats converged, the Brits chose to sail on and allowed the Luna Rossa to get some right-hand side leverage.

The Italian gain was immediately obvious. “We are right back in this, boys,” Spithill was heard to say. And they were, having negated their earlier loss they rounded the second windward gate 23 seconds behind the British boat. But they made another poor rounding – worse in fact than the previous one – and it left them sailing slower and higher than their rivals for several seconds.

Meanwhile the British were continuing to sail with poise and rounded the right-hand buoy of the final leeward gate with a 23 second lead. With one lap to go the Italians needed to make something happen so split to the left buoy. But with Ainslie and Scott happy to keep a loose cover there was little meaningful the Luna Rossa crew could do to close them down.

The gap between the boats opened and closed a little on the final downwind leg but the British never looked under pressure and went on to record their second win by a margin of 28 seconds.

So two points on the board for a transformed British crew who will be breathing a little easier knowing that in 10 knots and above, they are not only fast but super competitive. It must have been a great relief, but as Ainslie pointed out – after first heartfeltly dedicating the two wins to the land-based members of the team for all their hard work in the last few weeks – the team still has lots of hard work to do to continue to get faster in all conditions, but especially in the lighter end of the wind range.

For all of us spectating the Brits return to form is great news as the Prada Cup will be so much better a competition with three competitive teams rather than just two as had seemed in prospect before Christmas.