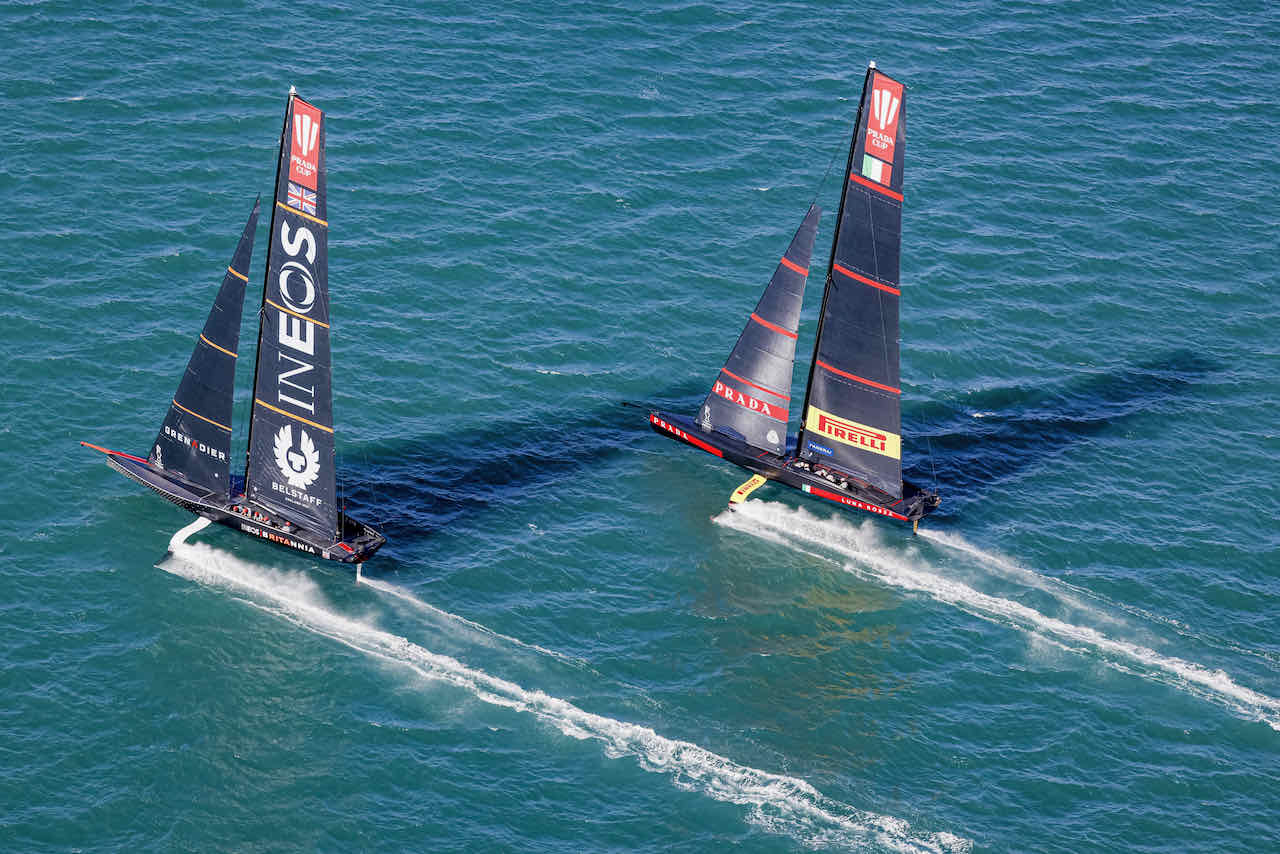 Despite the one-sided score line Yacht Racing Life editor Justin Chisholm argues it was all much closer than it looked.

Despite what you might have been reading on the various America’s Cup social media groups recently, the first two days of racing in the Prada Cup Final this weekend took place between two extremely evenly matched teams.

Although Luna Rossa’s four races to zero score card might suggest an overall performance advantage, the data coming off the boats confirm that – other than in the marginal foiling conditions we saw for the opening race – there is next to nothing to choose between the British and Italian boats all around the race course.

Don’t believe me? Listen to what Luna Rossa co-helmsman Jimmy Spithill had to say on Sunday evening.

“It’s very, very close racing between these two boats and I think that shows on the numbers,” he said. “Two very good sailing teams, good teams on shore, and the two packages are pretty similar.”

But if all that is true then why are the Italians sitting on an ultra-comfortable four-point lead after the first four races of the first-to-seven points series?

The answer to that question is simple – the Luna Rossa crew sailed better than their British counterparts in all four races.

In every way they were sharper, more composed, and made way fewer mistakes than their opponents did. In the America’s Cup – and to be honest, in all types of yacht racing – that is an extremely potent combination.

On the subject of mistakes, nobody is unaware that the British team somehow conspired to hand away control during the prestart section of all four races over the weekend. They were each glaring errors for which there really is no excuse. Not that Ineos Team UK skipper Ben Ainslie is making any.

“We need to find a way to get off the start line better,” Ainslie said on Sunday evening.

How is then, that after losing four races on the bounce to Ineos in the round robins, the Italians are now suddenly on the upswing and seemingly unable to put a foot wrong? What’s changed within the Italian camp?

According to Luna Rossa co-helmsman Francesco Bruni the team has been in a constantly evolving state of improvement since they last raced against the British on January 23.

The results of all this effort are clear to see. Gone are the fluffed tacks and at times garbled communications loop we saw from them during the round robin racing. Are they any faster compared to the British than they were back in January? Maybe a bit, but it’s hard to know for sure.

The other big change is the integration of mainsheet trimmer Pietro Sibello into the communication flow and decision-making process on board Luna Rossa.

For those who don’t know him Sibello is a talented high-performance sailor who has represented Italy twice at the Olympics in the 49er and has a European 49er title and three world championship bronze medals to his name.

Listening in to the on-board radio communication coming from Luna Rossa this weekend it was immediately clear that Sibello had been given a bigger brief to provide more expert input to Spithill and Bruni.

“We have got Pietro Sibello more involved than we did in the round robins,” Spithill confirmed at Sunday night’s press conference.

“In my mind he has really stepped up and strengthened the connection that Cecco and I have had. It was kind of like a missing link that we were missing in this combination – and I think it has made a big improvement.”

Turning to the British, the immediate question to ask is: What the hell is going on in the pre-starts? Truth is, the only people who really know the answer to that are the sailors – and maybe the coaches – on the British team. You can rest assured that they will be very, very focused on fixing that problem before the teams meet again.

I know that it might seem like Ainslie is simply stating the obvious, but with very limited time now in which to address these issues it’s important to know where to focus your efforts. There’s no point in blaming it all on the boat and trying to find a miracle route to more speed, when the real problem is that you are just not sailing as well as you know you can do.

Whether the British can regroup, reset and somehow rekindle the winning spirit they previously had remains to be seen. It’s a far from easy task for sure. Losing four races in succession tends to mess with your head somewhat and can make you doubt yourself.

Lesser mortals might crumble under such pressure, but these are battle-hardened professional sailors who know how to analyse their own performance clinically and ruthlessly. They are used to having ‘difficult’ conversations and speaking candidly about how each of them are performing their job on the boat.

The Brits’ post-race analysis from this weekend will no doubt have been a brutal no holds barred experience, but hopefully for them it is the catalyst for a series changing comeback when racing resumes.

As Ainslie pointed out on Sunday evening, despite the string of defeats the British team’s mission remains the same – and he is still backing them to deliver.

“Nothing has changed for us,” he said. “You have still got to win seven races. We’ve got a great team. We are going to fight hard. We are not going to give up on any of this. We are not happy being where we are, they’re happy they’re sailing well. We have got to turn it around; we will move heaven and earth to do that.”

Meanwhile, the Italians face a different challenge. Strange as it may seem, there are risks associated with taking such a big lead so early in the competition.

Nobody knows better than Jimmy Spithill how seemingly unassailable positions can be overturned by hard work and tenacity. He and his co-helmsman Bruni are clearly very much aware of the fragility of their situation and the challenge of preventing complacency from setting in.

“I keep repeating to the whole team and everybody on board: we need to think about the next race; stay focused because things can turn around really quickly here,” Bruni said.

Meanwhile Spithill said his message to the rest of the team would be that ‘the score line doesn’t matter’.

“You just can’t think about anything else but the next race, that’s the only race that matters,” he said. “Put all your time and energy into the next race – that’s been our philosophy all along.”

As if there were not already enough drama and tension associated with this Prada Cup Final series the news yesterday that this Wednesday’s races would need to be rescheduled because of a 72-hour New Zealand government-imposed lock down in Auckland following a limited Covid 19 outbreak has added an extra dimension.

Who might benefit most from at least one extra day before racing recommences is hard to say. If Ainslie was feeling any relief at being granted some unexpected extra prep time, he wasn’t showing it.

“We would love to race on Wednesday, looks like some great breeze,” he commented with a wry smile.

For the Italians meanwhile the postponement must surely be frustrating and risks derailing the enviable winning streak that they will have been hoping to ride all the way to seven race wins.

“I would love to sail tomorrow, but that’s not part of the plan anyway,” Bruni said ruefully yesterday. “I think we have to keep using our days like we have done in the last weeks.”

How this series will be ultimately decided is impossible to predict at this stage. For sure Luna Rossa have made the stronger start. At the end of the day, four wins is four wins. Three more and they are home and dry and heading into the 36th America’s Cup Match against Emirates Team New Zealand.

That said, there are no rules about the order in which the winner has to accumulate the seven points required to win the Prada Cup. With a further 10 races still on the schedule, on paper at least, Ineos still have plenty of opportunity rack up enough points to snatch victory from the Italians.

An update today on the America’s Cup website seems to indicate that the teams will be exempt from the restrictions and able to operate semi-normally, subject to complying with enhanced Covid 19 testing and other protocols. That means, I suppose, that both teams will be able to continue to work on their boats ashore and even go sailing – if that’s the route they think best.

However this Prada Cup Final series all eventually turns out, here’s hoping we see some fantastic racing between these two great teams along the way.