Skip to content
You are here
Home > America's Cup > America’s Cup: NYYC American Magic bow out of the Prada Cup 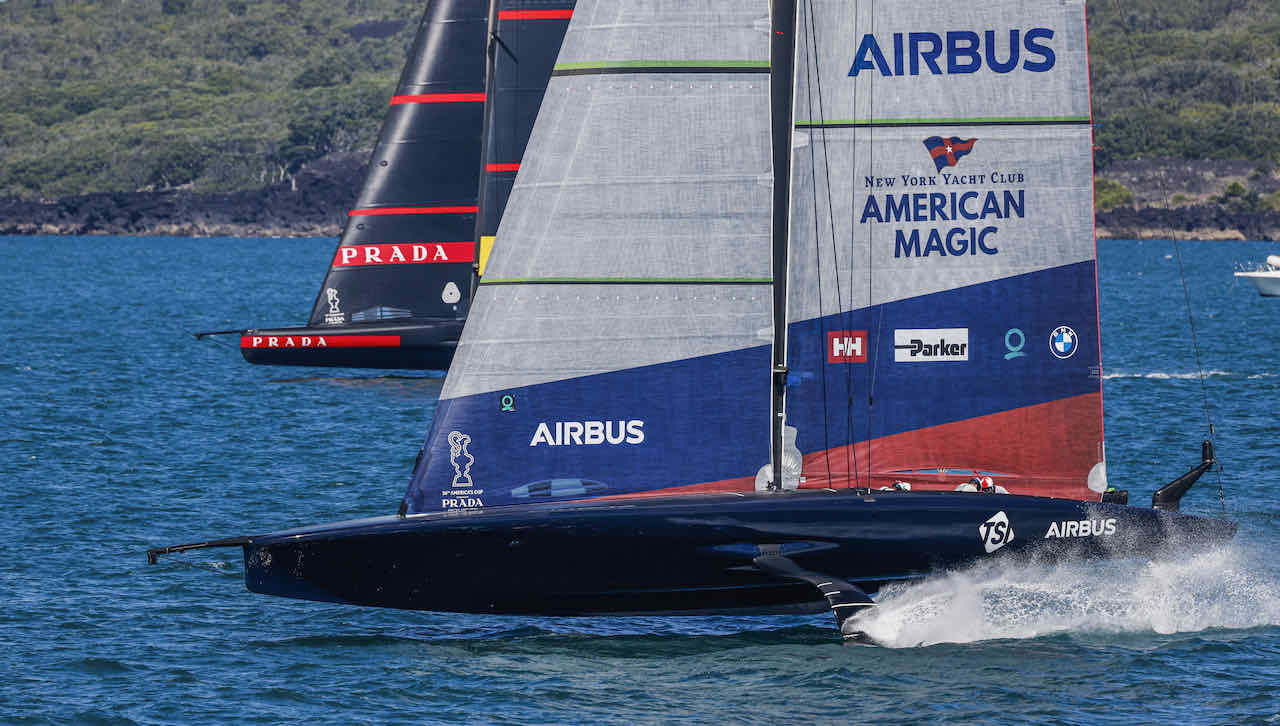 The US NYYC American Magic syndicate had it all to do on the second day of the Prada Cup semi-finals down in Auckland New, Zealand. Two nil down after yesterday’s racing they needed to put at least one point on the board to keep their series alive into the third day. It was a big ask and in the end the Americans were much improved but ultimately they came up short.

The second day of the Prada Cup semi-final brought more benign conditions compared to the close to 20 knot wild ride the teams had experienced the previous day. Saturday saw blue skies and sparkling 10 to 12 knot conditions for the first race of the day out on Course C. It was a less shifty day too, putting a premium on boatspeed and VMG.

It was immediately clear that the American crew looked more comfortable in these lighter winds than they had done the day before when they had been forced to manhandle their recently repaired Patriot AC75 around the racecourse on the ragged edge of control.

That enable American Magic helmsman Dean Barker to take a more aggressive stance in the pre-start. After coming in slightly late from the starboard side Barker tacked on to starboard  to leeward of Luna Rossa in the final minute to the start. His goal no doubt was to win the start in a controlling close to leeward position that would give the US crew the advantage when the boats tacked at the port boundary.

However, on the starboard wheel of the Italian boat Jimmy Spithill was having none of that. By way of a quick succession of weaving manoeuvres behind the stern of the American boat he was able to eke out the necessary separation he needed.

The two teams were even off the line in terms of pace, but the Italian’s positioning at the eight degree-favoured starboard end of the line gave them the jump over American Magic who meanwhile were squeezing  themselves around the pin end.

There was very little difference between the teams as they paralleled each other towards the port boundary. As soon as they reached it and tacked simultaneously on to port Luna Rossa to leeward and ahead was able to put the lee bow squeeze on and slow the Americans enough to force them to tack away.

From that point on the Americans were in the vice-like grip of the Italians who were clearly in no mood to give their opponents any sniff of a way back into the race. “Let’s get the foot on the throat,” urged Spithill to his co-helmsman Francesco Bruni when a chance to tack and cover presented itself.

Although the two boats looked reasonably evenly matched for speed both upwind and down, Luna Rossa always held the advantage on the VMG numbers. The Italian crew never put a foot wrong at any point around the six-leg racecourse and in the end they cruised to a 35 second victory to extend their series lead to three race to zero.

That meant the American Magic syndicate were now in a do-or-die, win-or-go home situation as they prepped themselves for the last race of the day. Could they reverse the series momentum to put a win on the board and take the series into a third day?

It was clear to see that will and the intention to do just that was undoubtedly there in the American Magic crew, but the cold hard reality was that their ailing boat let them down badly.

After trailing the Italians off the start line the Americans were still very much in the race at the top gate when they discovered their starboard foil mechanism would not allow them to drop the board to tack for the buoy.

They did eventually get the board to drop but they were well past the layline and the Italians were already around and ripping downwind. Any hopes that they could stage a comeback went out of the window when the board problems repeated themselves on the downwind leg, forcing Barker to drop the boat into the water outside the boundary to avoid in incident with the spectator fleet.

The issue persisted intermittently for the rest of the race but somehow the American crew managed to get their stuttering boat around the course close out their America’s Cup campaign on foils.

You can only imagine the depth of disappointment that the Americans were feeling to be the first team to be eliminated. No surprise then that the team’s skipper and executive director Terry Hutchinson had to choke back some tears as he spoke to the America’s Cup commentary team from the stern of Patriot soon after the race.

“It’s obviously disappointing,” Hutchinson said. ““We are racers, and we want to win.
There’s not a person in out team who enjoys losing. We have been proud to represent the New York Yacht Club and proud to represent our country.

“Yesterday was hard but today we sailed he boat better. Congratulations to Luna Rossa for the way they managed their starts.”

“We have had a lot of people support us and so ultimately you feel a responsibility to that. It’s brutal because what Roger [Penske], Doug [DeVos], Hap [Fauth] and the club gave us was the opportunity of a lifetime. So it’s disappointing to have it end in this manner – because I know that we are better than this.

“We have developed a great team here and a great infrastructure,” Hutchinson concluded, adding: “If we are fortunate enough to be in the 37th America’s Cup we will learn from these mistakes and be the stronger for it.”

With the Americans now bidding a sad farewell to the competition attention will now turn to the tantalising prospect of the Prada Cup final match up between the British Ineos Team UK and Luna Rossa.

It was clear that Luna Rossa port wheel helmsman Francesco Bruni was relishing the prospect of another crack at Ben Ainslie’s men after losing out to them in the thrilling round robin series decider last weekend. Bruni clearly thinks the Italian boat and crew have improved massively since that loss.

“We are sniffing revenge on Ineos,” he said with a cheeky grin. “We are very happy to have this second chance to be in the Prada Cup final. We have had some very huge steps forward compared to last weekend. In five days the boat is completely transformed, we are sailing better and the whole team is to another level.

The British and the Italians now have two weeks to push their boats and their sailors up the performance curve before the first weekend of the first to seven points Prada Cup Final on February 13/14.