Skip to content
You are here
Home > America's Cup > America’s Cup: Matt Sheahan video update on the new round of AC75s 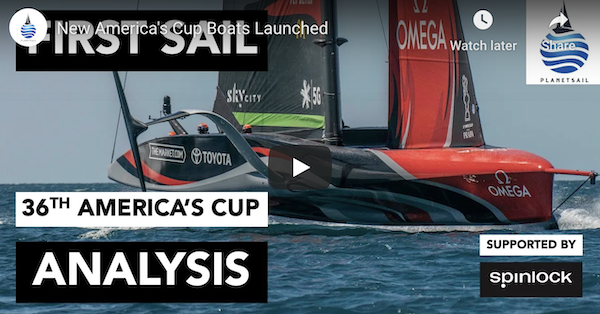 There has been a lot going on down in Auckland, New Zealand in recent days as the four teams that will contest the 36th America’s Cup each revealed the second generation AC75 foiling monohulls they will use when racing begins at the end this year.

With that first event – the America’s Cup World Series/Christmas Cup regatta – just a month away there was no time for hanging about for the three Challenger teams – Luna Rossa Prada Pirelli Team, NYYC American Magic, and Ineos Team UK – and the Defender – Emirates Team New Zealand.

No sooner had their state-of-the-art second boats been wheeled out of their respective boat sheds to stand blinking in the glare of public scrutiny for the fist time, than they were flying around the Hauraki Gulf at breathtaking speeds.

It’s clear that the pace of the 36th America’s Cup is ramping up and the rapid transition from new boat launch to full foiling fight for these brand new boats has been staggering. In this latest video update from Planet Sail British sailing journalist and America’s Cup veteran reporter Matthew Sheahan takes a look at the various boat launches and explains why these boats are such beasts to handle.