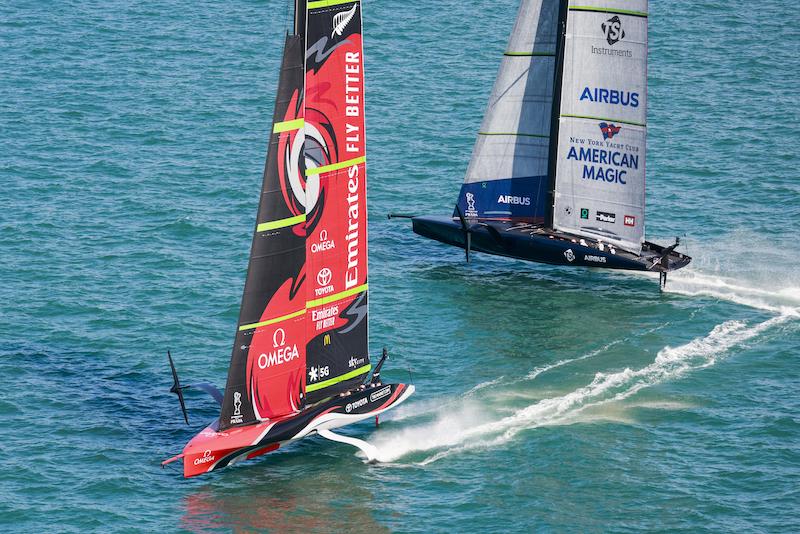 Lighter winds on the final day of racing at the America’s Cup World Series – Auckland made life increasingly difficult for the four international crews to keep their boats on the foils. Here is how Yacht Racing Life editor Justin Chisholm saw the action.

Lighter winds and a reluctant-to-move spectator fleet meant an hour or more delay to the start of the third day of racing at the America’s Cup World Series in Auckland.

The opening race of the day between Luna Rossa Prada Pirelli and Ineos Team UK started off as a close-fought affair but quickly evolved into an easy walkover for the Italians after fading winds in the latter stages of the end of the race saw the British boat struggle to stay on its foils.

Meanwhile, the Italians are looking increasingly slick in their manoeuvres and look smoot on all points of sail around the racecourse. The Brits’ problems meant that the Jimmy Spithill/Francesco Bruni helming partnership weren’t put under any pressure in the race, but their evident focus and calm radio communication bodes well for this innovative helming partnership.

When the boats converged for the first time on the upwind opening leg it was the Americans were ahead by a couple of boat lengths. Dean Barker threw in a covering tack, but the Americans’ boat came out on a low heading that enabled Peter Burling to switch quickly to high mode and live comfortably on the hip of the American’s.

When the Kiwis did finally tack away Barker continued on into better breeze on the right which saw the US boat a smidge further ahead on the next cross. At the first windward gate the New Zealanders trailed by 12 seconds.

The first downwind was a pretty even affair despite the boats being on the far opposite sides of the course at times. The first cross took place at 35 knots with American Magic still ahead. The next cross just short of the leeward gate at first looked very marginal for the American’s on port to cross the Kiwis. They made it cleanly, however, to take the right-hand buoy while Burling surged past their stern to round the left mark three seconds down.

In the build-up to the next coming together of the two boats Barker knew he was ahead but could be heard to hesitate about a covering tack. That moment’s delay meant the opportunity was missed and Team New Zealand now had control of the favoured right-hand side of the course.

Both boats went almost all the way to their respective boundaries before tacking and aiming back towards the centre of the course. When they converged, the Kiwis were just ahead so Barker had to duck them. Three more legs to go and we were all on the edge of our seats – when agggghhh!!! a fluffed tack by the Americans saw them fall off their foils.

What caused the splashdown will likely never be known outside the team, but Barker’s frustration was unmissable.

“So annoying,” he muttered through gritted teeth. “We have to sort this out.”

That mishap meant the was effectively race over at this stage, as the New Zealand boat carved around the second windward gate marker and tore off into an unassailable lead.

The British crew’s frustrating day got even more soon after the start of their race against American Magic. Having picked up a penalty for a one second early entry to the start box the Ainslie started on the hip of the American boat but quickly began to drop into the dirty air from the American mainsail.

Reminded on the radio of his outstanding penalty by chief umpire Richard Slater, a frustrated Ainslie replied resignedly: “Don’t worry Richard, it will soon be gone.”

Almost inevitably, the British then immediately dropped off their foils the second they tacked for clear air – ending the competitive nature of the race at that point.

It’s worth pointing out that American Magic were not immune from foiling problems. They took a good while to get going after a splashdown on the penultimate upwind leg, but ultimately they took the win by several minutes.

For the Brits, the rest of the race was nothing short of torture as they struggled and fought to keep their boat airborne through every tack and gybe. Eventually, unable to get his boat boat to make any meaningful headway downwind in displacement mode, Ainslie accepted the inevitable and retired.

“Tough day everyone,” he was heard to say. “We are done.”

The prestart for the final race of the day between Emirates Team New Zealand and Luna Rossa saw Spithill and Bruni easily outmanoeuvre Burling to give them a several boat length lead at the start.

Some smart sailing by the Italians saw them make the best of the shirty first beat to lead around the first windward gate by 32 seconds. The Kiwis meanwhile under-laid the right-hand gate mark and in the struggle to get around fell off their foils. The resulting speed build was slow (comparatively, 15 knots) and painful to watch, but 800 metres down the course Luna Rossa were also off the foils and fighting to fly.

Minutes later, it was the Kiwis who coaxed their boat out of the water first begin to accelerate towards the leeward gate, surging past the still struggling Luna Rossa crew to take the lead.

At the leeward gate it the New Zealanders ahead by 40 seconds, but a bad tack on the next beat saw Luna Rossa close to within 50 metres. A brief loose cover tacking match ensued before the boats split tacks for the second half of the leg.

Emirates Team New Zealand had just 18 seconds at this, the final windward gate of the shortened course. A slight increase in wind pressure helped both teams stay on their foils through the gybes, but it was touch and go for both crews on almost every occasion.

The Italians did all they could to keep it close but Burling’s men held their nerve to take a 16 second win.

In terms of the points that was enough to give the three-day ACWS – Auckland regatta to Emirates Team New Zealand, with American Magic in second, Luna Rossa third, and Ineos Team UK fourth.

Tomorrow’s single-day four-race Christmas Cup regatta will use the seedings from the overall ACWS – Auckland results. With more light winds forecast we could be in for more stop/start racing.