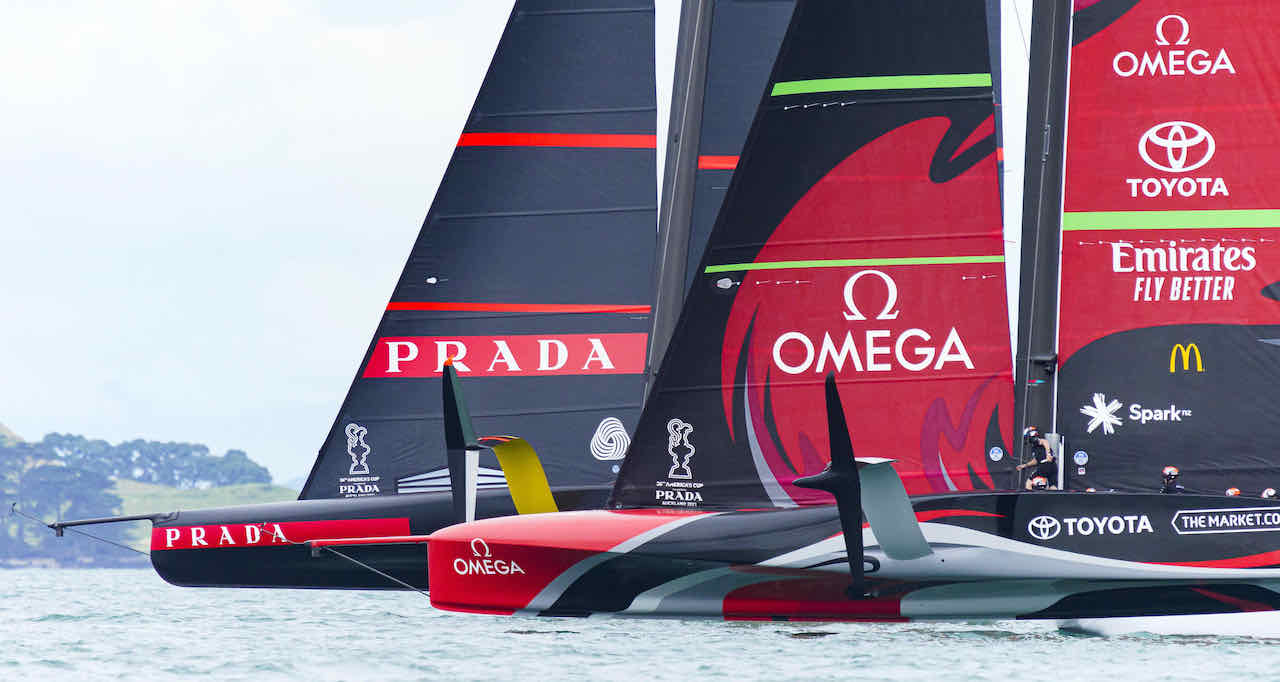 Emirates Team New Zealand won the only race of the day today to go 6 – 3 up against Luna Rossa Prada Pirelli Team in the first-to-seven points 36th America’s Cup Match series.

The ninth race of the 36th America’s Cup between the Defender Emirates Team New Zealand and the Challenger Luna Rossa Prada Pirelli Team will go down in the annals of the ancient competition as truly one of the classic match racing encounters.

The start was delayed by around half an hour to allow the Course C racecourse to be realigned with a stronger than expected breeze that had built to around 15 knots by the time the teams powered into the start box.

Having lost three races on the trot over recent days, the Italians looked fully fired up as they entered from the right and immediately threw in a fast but slightly raggedy gybe to follow the Kiwis out towards the right-hand boundary.

As New Zealand’s helmsman Peter Burling turned the boat downwind to gybe around, the Italians tacked to set themselves up to windward. With 60 seconds to go Jimmy Spithill on the starboard wheel of the Italian boat took a dive down towards the New Zealand AC75’s transom in an effort to push them back to the line early.

Burling managed to shrug that move off and with 45 seconds left on the clock the two boats were lined up in parallel sailing high and slow approaching the right-hand end of the line. Both looked close to coming off their foils, but with 17 seconds to go they simultaneously turned their bows down and rapidly accelerated towards the left-hand pin end of the line.

At the gun the two were at equal speed with the Kiwis to leeward doing everything they could to try to stay bow forward, and if they could, squeeze Luna Rossa enough to make them tack away before the boundary.

They didn’t manage it though and when the boats simo-tacked off the boundary Burling and Co. then had their work cut out to avoid being sucked down into the vacuum being created by the Italian boat to leeward.

They hung in well until the breeze began to click to the left and onboard Luna Rossa port wheel helmsman Francesco Bruni told his crew “high mode now” as he began to edge up to windward and start to hurt the performance of the New Zealand boat. Burling suffered as long as he could before eventually peeling off on to starboard towards the left-hand boundary.

So close was the situation that Bruni in the tactician role to leeward on Luna Rossa initially called for Spithill to tack ahead of the Kiwis who he believed would have the inside rights at the left-hand mark. That call got cancelled at the last second and a relieved Spithill held his course to cross Burling’s bow by what looked like a little over a boat length.

As the teams split left (ITA) and right (NZL) around the windward gate markers there was just a one second advantage to the Italians.

Both teams were calling a significant left shift in the breeze at the start of the first downwind. That gave the Kiwis a longer time to build speed than the Italians who had to gybe away from lighter pressure on the left (looking upwind) of the course.

When the boats converged, the Kiwis were ahead – but not by much.

The Italians opted to take the stern of the Kiwis and when the teams came back together it was Luna Rosa on starboard that was able to cross ahead and gybe back on to port to leeward of Team New Zealand.

No doubt wary of gybing into the Italian’s turbulent wing wash like they did so disastrously the previous day the Kiwis found themselves overlapped to windward and effectively locked out from the leeward gate by Luna Rossa.

Spithill and Bruni knew they had their rivals exactly where they wanted them. To make sure to inflict the maximum detrimental effect they sailed well past the layline to the leeward gate before timing their gybe perfectly. This classic match racing move left the Kiwis with no option than to follow in the Italian’s dirty air all the way to the left- hand gate mark.

A somewhat ropey round up and tack manoeuvre by the Kiwis at that mark cost them some more ground, but also enabled them to split sides with Luna Rossa at the start of the second beat. When the teams tacked back from the left (ITA) and right (NZL) boundaries, Luna Rossa were 175 metres ahead. They chose to put in a covering tack directly ahead of the Kiwi boat forcing Burling to immediately tack away to the right.

When they converged again in the middle of the course the Italians appeared to let the Kiwis off the hook, delaying their cover tack so long that Burling was able to put the bow down a little and power into a clear air position to leeward.

There was nothing to choose between the two boats as they flew towards the left-hand side course boundary both teams matching each other for height and speed as they slowly closed lateral separation on the approach to the boundary.

When they got there the Kiwis tacked first with the Italians delaying just long enough to take up a windward position on port tack. Once again the Kiwis put the bow down to power forwards in an attempt to clear their air.

Moments later when the Luna Rossa crew tacked and rounded the left-hand buoy, the Kiwis were just nine seconds behind. This gap decreased slightly over the second downwind leg as the Kiwis waited patiently for a chance to make an attack.

The delta at the second leeward gate was just three seconds as the Italians rounded the right buoy and the Kiwis rounded on the left. With the breeze dropping and becoming shiftier the two boats converged bow to bow with Luna Rossa coming from the right and New Zealand from the left.

As the teams split, the talk on board the Italian boat was becoming increasingly negative about the wind speed and angle they were encountering.

The Kiwis meanwhile were rocketing up the right-hand side in good pressure. When the two boats tacked it was immediately clear that the Kiwis had hooked into a significant right-hand shift and better pressure and were now well ahead and on the layline to the left-hand buoy.

It was just one mistake, but it was a knockout punch for the Italians. They rounded 18 seconds behind at the left-hand gate mark and could then only watch as their Kiwi rivals pulled steadily away on the final downwind to take their fourth consecutive race win.

New Zealand helmsman Peter Burling was understandably happy with the ultimate outcome of the exciting race.

“Good fun racing; it’s great to be back here on Course C and having a good battle with a really good team,” he said. “It’s great to walk away with another win as well.

“[It was] a pretty tight race all in all and one little right shift on that last beat really decided it for us. I think we did a pretty good job off the start and we couldn’t really get rid of them before the boundary.

Asked how much he would like to be able to close the series out with another win in the day’s second race Burling was unwilling to be drawn into that sort of conversation.

“We are just going out and trying to keep learning and improving the best we can,” he said. “Obviously we are here to try and win yacht races, but we will keep fighting for as long as it takes.

“This team has been in this position before. We just want to keep improving, keep moving forward. We are really excited about another race, but that one was a pretty close one, so we know we are going to have to sail just as well in the next one.”

Expressing the disappointment of the Italian team Francesco Bruni had this to say:

“Unfortunately that was a painful one, but chin up and keep fighting,” he said. “We are definitely fighting hard. I am very proud with the full team, with the boys. We couldn’t get every shift right and we missed this opportunity, but we need to think about the next race. We can still win races for sure.”

Asked about that successful lock out manoeuvre at the leeward gate Bruni said:

“I think we played very elbows out. We went for a lock; they were well overlapped so they couldn’t gybe. It was a great call by Jimmy on the timing of the board drop so that we could reach the closer mark at the best angle – so there was a little bit of a stretch there.

“I think we did a fantastic race really – no big regrets.”

With the Defender now on match point to retain the America’s Cup the scene should have been set for a thrilling final race of the day. But with the breeze slowly shutting down and becoming more and more unstable the race committee didn’t have time to reconfigure the course before the 1800 cut-off stipulated in the rules.

That means the two teams another night to sit and ponder their fates and consider their strategies before they do battle again tomorrow.

Who will get the best night’s sleep is hard to guess. The Italians now have a huge mountain to climb to keep their dreams of lifting the America’s Cup for the first time alive. Meanwhile, the Kiwis might be just one race away from a second America’s Cup win, but they have painful memories of being in this position once before and ending up on the losing side.

Can the Kiwis close this out tomorrow with one more win? Or will the Italians be able to mount a comeback with a couple of victories that will keep the series going for another day?

Only time will tell, see you all tomorrow to find out.