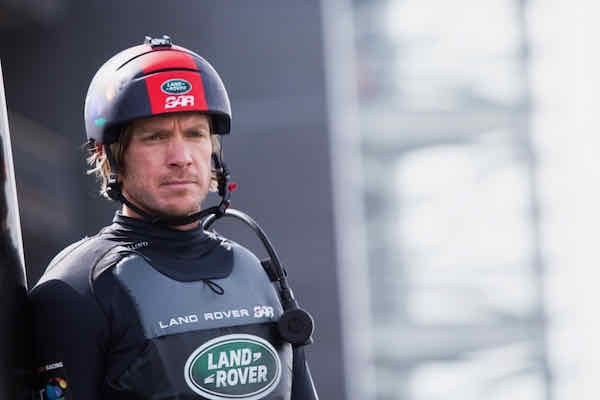 For the 36th America’s Cup he is back working with Ainslie, this time though in a supporting role as racing rules advisor for Ineos Team UK.

Despite his treasured bowman position having been made increasingly redundant by the advent of foiling over the last two cycles of the America’s Cup Cornwell is excited to be part of what he describes as “the strongest British team I’ve ever been involved in”.

That’s a fantastic thing to be involved in personally and something I’ve always wanted in my career,” Cornwell told Justin Chisholm on an episode of The Yacht Racing Podcast XTRA.

CLICK HERE TO CHECK OUT THE YACHT RACING PODCAST EXTRA

“I always wanted to see a strong British America’s Cup team and I definitely would have remained a fan of this team, whether I was involved or not.”

Ineos Team UK should be riding high after turning a miserable zero-win performance in last December’s America’s Cup World Series warm up regatta into an all-conquering romp through the round robin series. They laid waste to fellow Challengers NYYC American Magic and Luna Rossa Prada Pirelli to secure the automatic berth in the Prada Cup final.

Now though in the final week before racing begins in that Prada Cup series against Luna Rossa, Cornwell said the mood in the British team base could better be described as ‘apprehensive’.

“The atmosphere has been really good,” he said. “Obviously, the biggest thing we’ve been through was the disappointment of how it was going pre-Christmas. The World Series – as I’m sure most people listening will know about – was just disastrous. To then go from there to winning the round robin, that was a massive boost for the team.

“But I wouldn’t say we’re riding the high. I think we are apprehensive about the finals, because we haven’t won anything yet. If we don’t do well in the Prada Cup final then we’ve really not achieved what we committed to.

“I think it’s going to be a very, very difficult series but the team spirit is really good. Everyone’s pulling hard and there’s a lot of there’s a lot of what we call ‘midnight marine’ going on here, as the guys are working through the small hours to get things done.

“We are very patriotic team and we certainly feel like we’re doing this for Great Britain, Queen and country. Hopefully we can have a good result in the Prada Cup final and send a little bit of joy back home.”

On the subject of the infamous yellow card threat that hangs like the sword of Damocles over the heads of the British sailors, Cornwell had reassuring news for British fans wary of the Italian team lining up a second measurement complaint.

“We’ve shrugged it off a little bit, but it’s still there,” Cornwell said. “We just have to be really, really cautious with everything on the boat.

“What the Italians did – they had every right to do,” he added. “They thought they saw something which wasn’t legal and that’s actually part of the racing rules – you’re allowed to put in these claims of non-compliance.

“I think the good thing is that the measurers have been very onboard with all this too. They are sort of saying ‘You have all had ample opportunity to see each other’s boats – we know you’ve been photographing each other’s boats, every inch of them – so if it’s not a change, if it’s not something new on the boat, then don’t come at us with these claims of non-compliance’.

“Unless it’s a change from previous racing, then they don’t even want to know about it right now,” Cornwell suggested.

Nevertheless, the British team is taking no chances on getting caught out again and have beefed up the already strict change control process for any modifications to Britannia.

We’re being very, very cautious over any changes on the boat, Cornwell explained. “If you change a single thing on the yacht there’s a sort of central platform of people you have to tell. Then they will speak to the measurers, to make sure the measurers are happy with it.’

What then would a win in the Prada Cup final and a chance to take on Emirates Team New Zealand in the match for the 36th America’s Cup mean to Cornwell and everyone else in this fiercely patriotic British squad?

“That would mean everything – a lifelong goal realized,” Cornwell replied unwaveringly. The America’s Cup – I think even more so now – is the pinnacle of the sport that we all love. To see the Brits in it and to be involved is always great. But to see a British team doing well, as a British sports fan and a sailing fan, that would be just amazing.”

However, nothing is ever assured in the America’s Cup – particularly this one. That’s a fact that Cornwell said the British crew were all too aware of.

“To be here with the boys, should we be able to make that final would be exceptional – but it’s not going to be easy,” he said. “We’ve got a long road ahead of us. To win seven races against the Italian team is no mean feat at all and we are very aware that that’s going to be a real challenge.