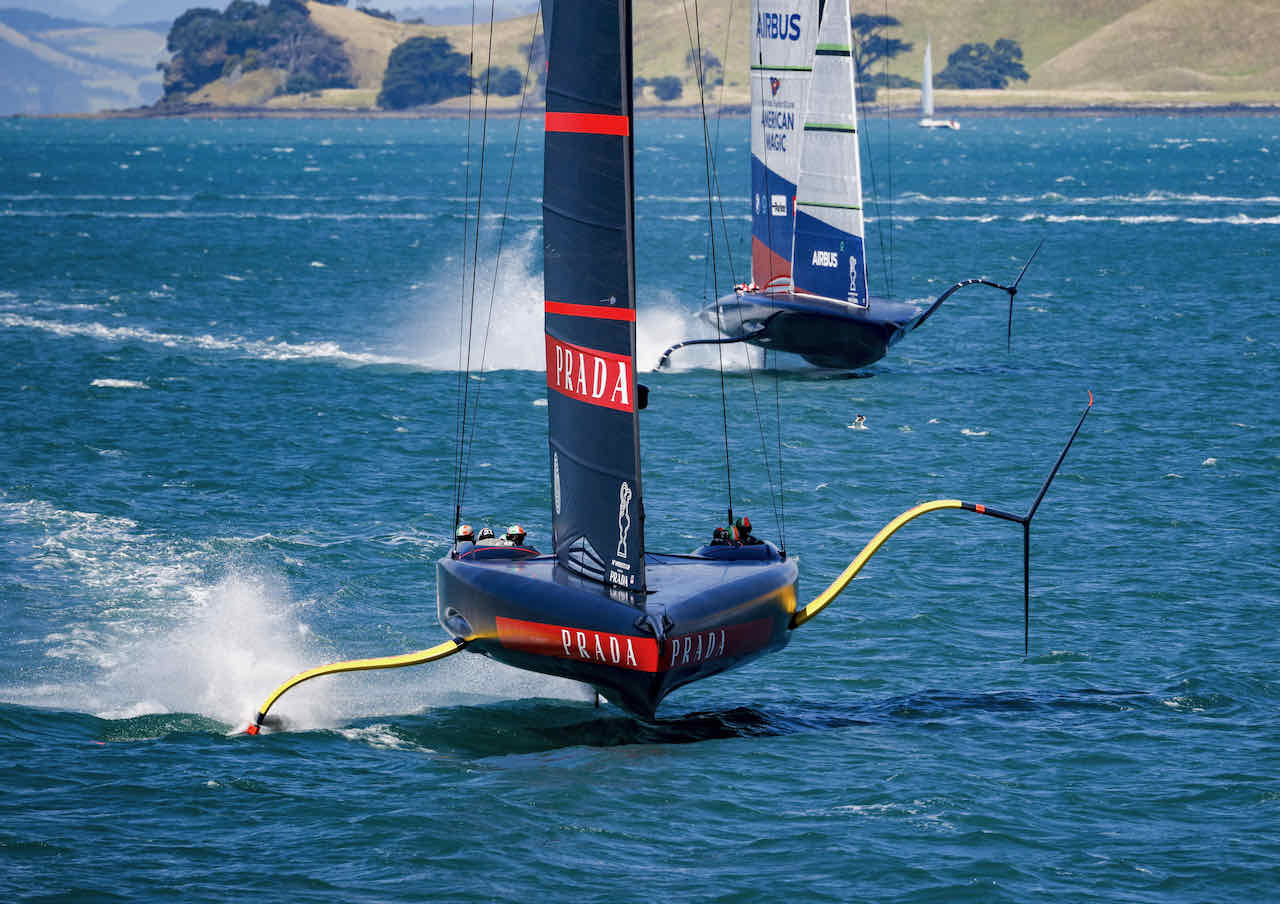 Shifty and blustery conditions were the order of the day for the first day of the Prada Cup Challenger Selection Series semi-final series between the US NYYC American Magic and Italy’s Luna Rossa Prada Pirelli Team got underway today down in Auckland, New Zealand.

That the American Magic AC75 was out on the race course at all was a major achievement considering the devastation that had been wreaked on its internal systems by the capsize and near sinking two weekends ago. So for us to expect the American crew to bounce back flawlessly from that traumatic experience was a pretty big ask, even in the best of circumstances.

So it was no real surprise that the US team turned in a hesitant performance in the first race of the day – especially given that race took place in full blooded conditions that saw the breeze bouncing around 19 knots at the start.

Contrastingly, their Italian opponents on the Luna Rossa Prada Pirelli Team AC75 delivered a composed and controlled performance that saw their two helmsmen Jimmy Spithill and Francesco Bruni apparently fully back in synch after the evident breakdown in communications on several occasions during their last race against the British Ineos Team UK.

There was next to nothing to criticise about the Luna Rossa performance in the opening race today. Spithill and Bruni worked well together to take control in the prestart after they chased an already harassed looking Dean Barker deep into the right-hand side of the start box, before tacking to leeward to block his path back to the start.

When the American boat momentarily fell off its foils the Italians instantly pulled the trigger and scorched off towards the starboard end start mark to begin the race with a 10 second advantage.

It was pretty much game over after that as Spithill and Bruni talked each other calmly and smoothly around the course. They kept a loose cover on the US boat for the first four legs of the eight-leg race, but when Barker lost control on a high speed – 53.31 knots – top mark rounding and had to tack around outside the boundary, the Italian crew were able to take their foot off the gas.

The delta at the finish was two minutes and 43 seconds.

“It’s not the result we wanted but it’s fantastic to be back out here and we will be fighting all the way to the end,” American Magic helmsman Dean Barker told the America’s Cup commentary team between races.

The will to do just that was there for sure but the prestart of the second race of the day saw Barker fighting for control of his boat rather than his opponent. With the Americans clearly unable to engage in a dog fight Luna Rossa were able to concentrate on their time and distance to lead off the line by around 10 seconds at the starboard end.

From there on in to the finish of this eight leg race the Italian crew were effectively on a training run as they extended their advantage over an increasingly uncomfortable-looking American Magic crew who twice crashed off their foils rounding the right-hand windward gate mark.

Other than one skittish one-board rounding of the left-hand leeward gate mark in 21 knots of breeze that saw the Italian boat lose grip and skid sideways before crashing off its foils for a few seconds, the Luna Rossa crew sailed another largely unflustered race to comfortably claim their second point of the day.

Today’s two wins puts the Italians halfway to the four points they need seal victory in this first-to-four-points Prada Cup semi-final match. The team will be hoping for more of the same in tomorrow’s two race day to propel them into a Prada Cup final match up with the British.

For the Americans it will likely be a long agonising night of soul searching as they try to come up with some way of turning this series around on the second day and avoid the ignominy of becoming the first team to be eliminated at this 36th America’s Cup cycle.