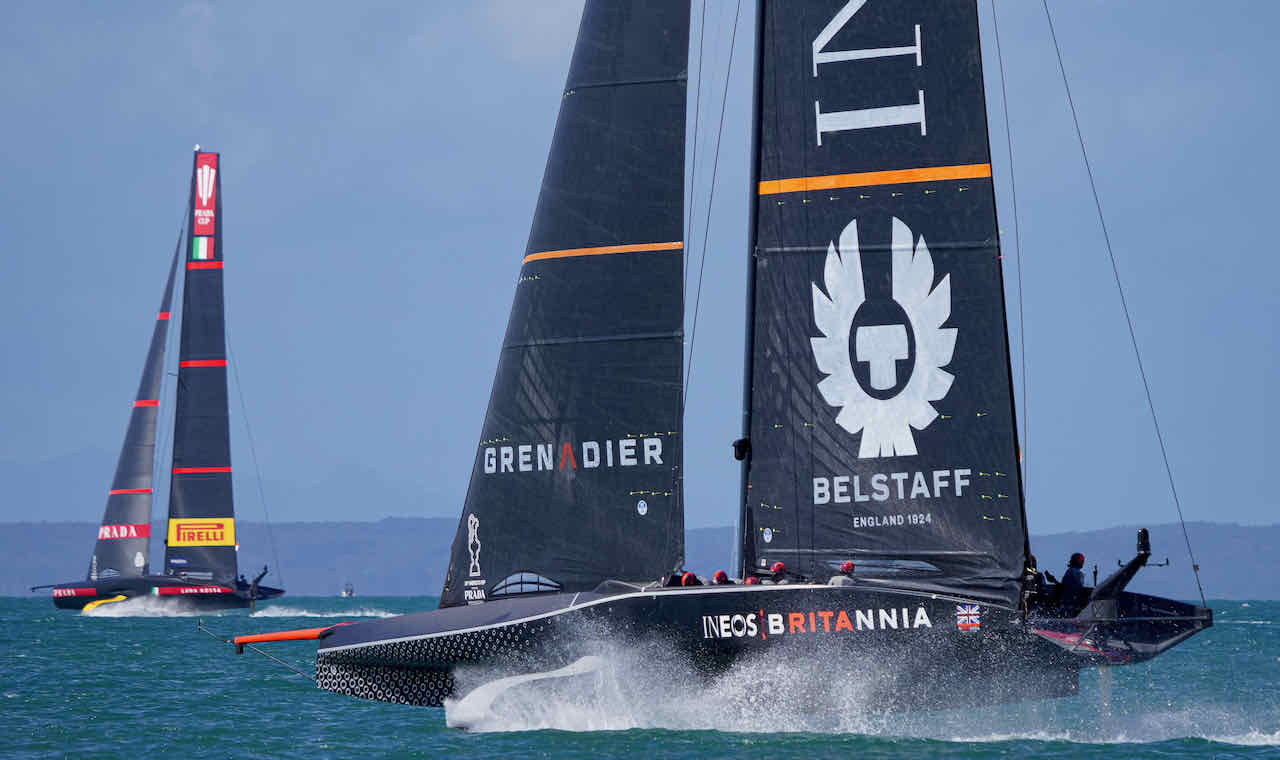 There can have been few more anticipated Challenger Selection Series finals than the tantalising match-up between the so far dominant British Ineos Team UK and the slick and smooth looking Italian squad Luna Rossa Prada Pirelli Team.

On paper the UK team went into the first day of racing with the upper hand having made a clean sweep of the round robin series to earn the automatic berth to the final.

The Italians meanwhile had the benefit of four more races in their one-sided match against a badly weakened NYYC American Magic and were looking increasingly impressive all around the racecourse.

Truth is, nobody  – not even the teams themselves – knew for sure who might come out on top when the two crews faced each other again today for the first day of Prada Cup racing. That fact made the anticipation of the opening race all the keener for the fortunate fans lining the racecourse in Auckland and the rest of us watching online around the world.

For all those expectations the first race of the Prada Cup turned out to be all over within the pre-start period after Ineos dropped off the foils in patchy breeze soon after making a late entry from the right-hand side. Luna Rossa too looked to be on the knife-edge of dropping into displacement mode as well, but somehow just managed to stay in the air.

That left the Italians unencumbered to take a clear run at the start line and they had made it all the way to the left-hand boundary and tacked before the Ineos crew had managed to dip down to cross the start line and coax their boat into the air.

Happily for all concerned the breeze slowly but surely increased over the rest of the race, ensuring that boat boats were able to stay in flight mode. But there was no coming back for the British crew against the Luna Rossa team’s smooth and assured boat handling and increasingly evident speed advantage.

At the finish it was first blood to Luna Rossa and a crushing one minute and 52 second defeat for the British.

With one race done and the breeze continuing to ramp up, it was time to reset for both teams as they each set about reconfiguring their boats for the new conditions ahead of the second race of the day.

The wind was touching 16 knots come start time and both teams came scorching into the prestart box at full bore. The Brits were first in from the left – albeit 10 seconds late – and they headed off to the upper right-hand corner of the start box. The Italians meanwhile entered from the right and quickly gybed around to go on the hunt for Ineos.

With the Italians on their heels the British made a long looping bear away manoeuvre culminating in a gybe back onto starboard to head back for the line. Luna Rosa crossed behind with the aim of being able to push the British back to the line.

There was a minor skirmish between Spithill and Ainslie but that didn’t come to anything and the two boats got off to a fast and even start in the middle of the line with Ineos positioned to leeward and slightly bow forward. This positioning suggested advantage to the British and sure enough Luna Rossa soon began to struggle to hold their lane and were were forced to tack away early.

That should have handed the Brits a decent lead given their rival was sailing towards the less favoured lighter wind right hand side of the course. But when the boats converged for the first time it was Luna Rossa on starboard were just ahead, forcing Ineos into a somewhat scrappy and disorganised duck behind the Italian’s transom. 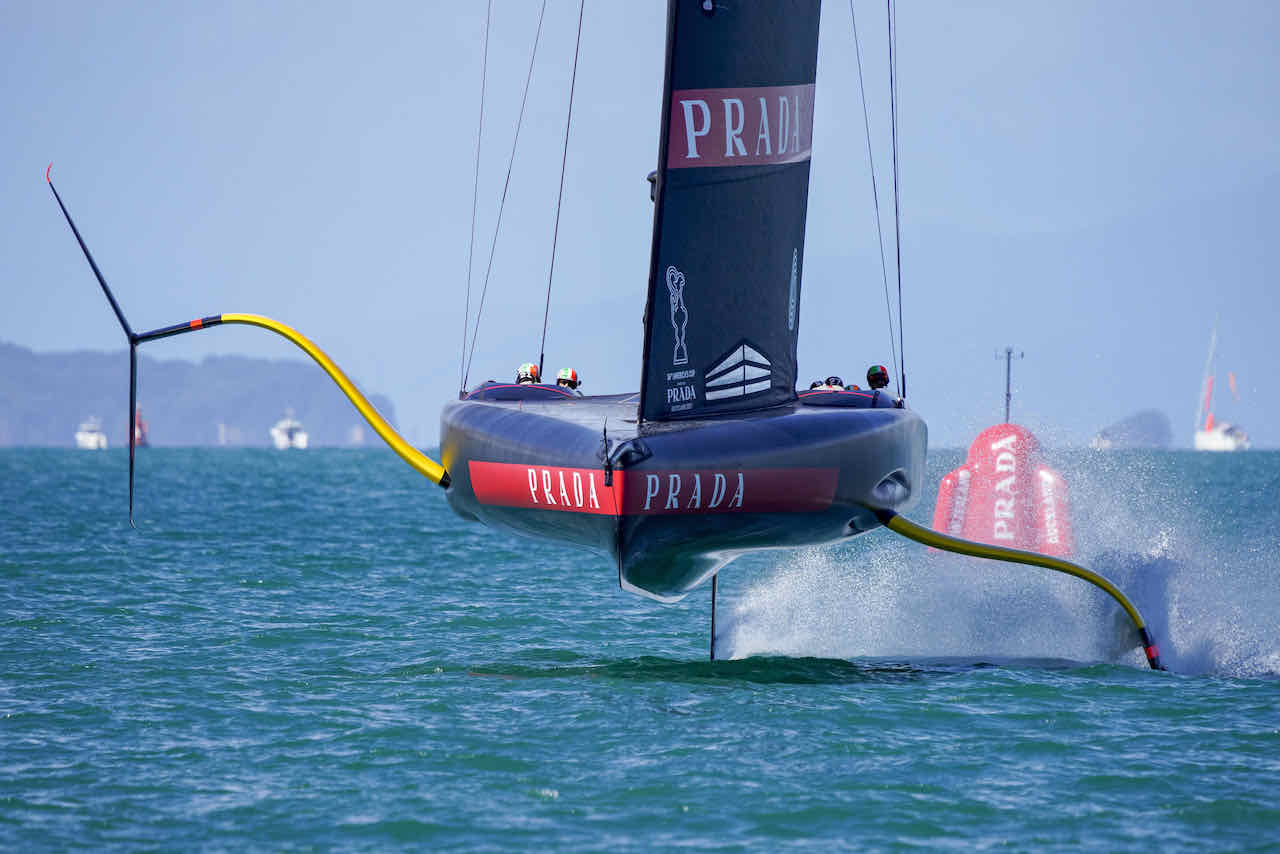 From there on in, the story was all about Luna Rossa’s marginal but distinct speed advantage on both points of sailing. With the breeze proving to be rock steady for the entire race and the Italians once again super sure-footed in their boat handling there simply were no opportunities for Ainslie and Co. to find a way back in.

That’s not to say that the Italians ran away with the race. The British crew kept their composure and calm and did a decent job of keeping the contest as close at it could have been.

At the finish though it was a 26 second win for Jimmy Spithill and his co-helmsman Francesco Bruni to put two well-earned points on the board and at the same time crank up the pressure on the British team who know they need to be faster by tomorrow.

There was no hiding Ben Ainslie’s disappointment at the day’s two defeats when he spoke straight after the racing.

“It was pretty steady breeze, so it was much more of a drag race,” he said. “[It was a ] pretty even start and a close first beat. The Italians did a good job, sailed just that little bit faster, a little bit better around the course.

“Credit to Luna Rossa – they are a great team and they are going to be pretty hard to get past. They don’t make many mistakes for you. We will have to go away and think about how we can get a little bit more pace and look at some of the things we didn’t get quite right.

“We know we have a great boat and we’ve got a great package here and a very good team backing us up on the shore,” he said. “So we are confident in our boat, but having said that, we still know there’s quite a bit there on the table. We made a few mistakes today and we’ll be going back to try to sharpen up on those before tomorrow.”

So it’s been a tough start to the Prada Cup for the British and a dream debut for the Italians. No doubt the British will be trying to mentally press the reset button overnight and find a way to come out fighting again for tomorrow’s second day of racing.

“We are not happy to be two nil down, but we are going to keep fighting hard and race harder and push harder to try to get those races back,” Ainslie said at the press conference.

In the Luna Rossa camp too there will no celebrations or resting on laurels as they also look to Sunday’s two races as a chance to ram home their advantage with two more victories to get them past half way to winning this first to seven points series.