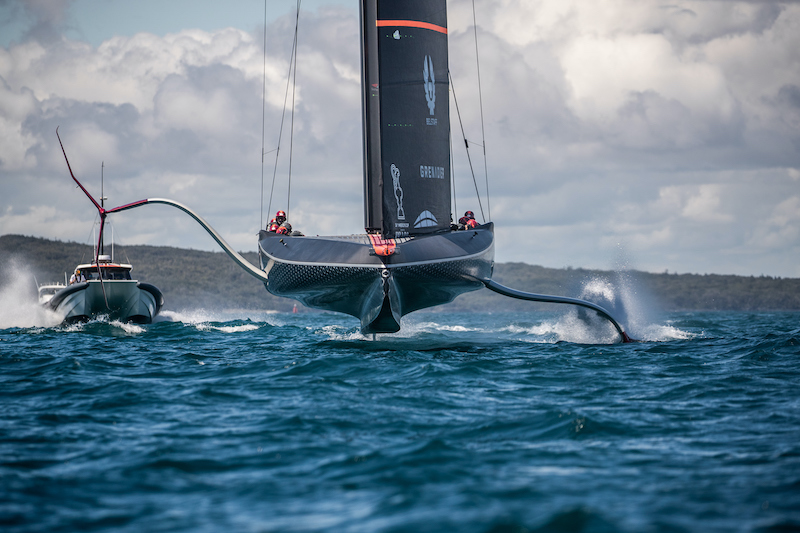 A look at the contribution made by the Mercedes-AMG Petronas F1 Team has made to the British America’s Cup syndicate INEOS Team UK in its quest to win yacht racing’s oldest and most prestigious trophy.

The 36th America’s Cup is just around the corner and INEOS TEAM UK have recently launched their AC75 race boat ‘BRITANNIA’ in the host city of Auckland, with the design raising plenty of talking points on the dock and online.

One eye catching element was the shape of BRITANNIA’s wing foils which penetrate the water to make BRITANNIA fly. They have been delivered to Auckland from Mercedes-AMG Petronas F1 Team’s HQ in Brackley where the team’s Applied Science division has been working with INEOS TEAM UK to manufacture some of the most sophisticated technology ever seen in the America’s Cup.

This has been the culmination of a twelve-month project involving up to 30 members of the Applied Science team, led by Director Graham Miller, who have been embedded with the British challenge and dedicated themselves to help delivering and accelerating performance on the water.

Nick Holroyd, Chief Designer INEOS TEAM UK commented “The attention to detail at Mercedes F1 is phenomenal. Even the smallest details of design and build can add up to be quite a significant performance gain and they have brought that exactness to our campaign.

“Previously, we have tended to look at the big performance opportunities and how we can manipulate those but with Mercedes F1 Applied Science support we have been able to push to the finest of levels and this can be seen first-hand in our foil wing programme which we have really pushed to the leading edge.”

The wing foil project is just one area the Applied Science team has been working on with support also added across simulation, manufacturing, and control systems, bringing their F1 know-how and capability to the sea.

Graham Miller, Director of Applied Science at Mercedes F1, overviewed the relationship; “One of the things we bring to the table is extra bandwidth which has meant increased reliability and efficiency and has led to time saving on the project.

“We also noticed there was not a big in-house manufacturing capability within the team compared to our HQ. Therefore, we were able to take the foil build project in-house at Brackley using some of the world’s best manufacturing tools to drive the project to meet specific timelines.”

The partnership continues in Auckland with Applied Science engineers onsite throughout the build up to and during the America’s Cup racing period working alongside INEOS TEAM UK to develop and implement innovations in engineering, human science, simulation and data analysis.

Miller added “It was a proud moment for the whole Mercedes F1 team at Brackley to see the wings lifting BRITANNIA out of the water for the first time. As the saying goes in the America’s Cup ‘there is no second’ and our Applied Science team in the UK and NZ will be working right up until the last race day to help Ben and team bring the Cup home for the first time.”