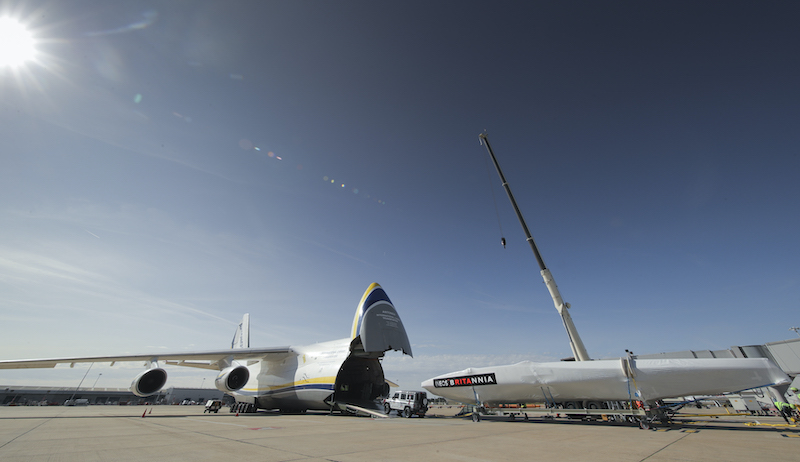 The journey to Auckland began on Friday 25th September from the team’s base in Portsmouth, where the Union Jack hanger doors opened to reveal a wrapped boat ready for its 11,000 mile, two-stopover journey on a 1987 Ukrainian Antonov cargo plane.

The 75-foot foiling monohull (code named RB2), that the team will race in the America’s Cup from January 2021, was loaded onboard the cargo plane for the four-day journey to New Zealand, where members of the British sailing team are eagerly awaiting her arrival.

As soon as the race boat arrives at the team’s newly constructed base in The Viaduct in Auckland, it will undergo a final fit out ready for her launch and maiden sail in October.

Team principal and skipper Sir Ben Ainslie is currently in a two-week mandatory quarantine in New Zealand and is counting down the days until sailing operations begin.

‘As a Challenger you’re always playing catch up on the race boat design from the Defender who gets to define the rules,” Ainslie said. “That’s the game we chose to compete in, so we had to give ourselves maximum design and build time in the UK, which meant the Antonov was the only transport option.

“It’s testament to the huge effort by the whole team to get RB2 built and delivered to New Zealand on schedule. We can’t wait to get her out sailing!”

Project Director Dave Endean has overseen the build and safe transportation of RB2 to New Zealand.

“It’s been a huge operation to get to this point and a real team effort,” Endean said.

“The logistics of moving an entire America’s Cup team, including two AC75 boats, to New Zealand are not insignificant and it has taken a lot of time and hard work from the entire team to make it happen.

“It was an important milestone to get our race boat on the Antonov cargo plane today and I, and the rest of our team left in the UK, can’t wait to join the team in New Zealand now and get sailing in the Auckland Harbour.”