Skip to content
You are here
Home > America's Cup > America’s Cup: Impasse continues as Kiwis and Italians each take wins 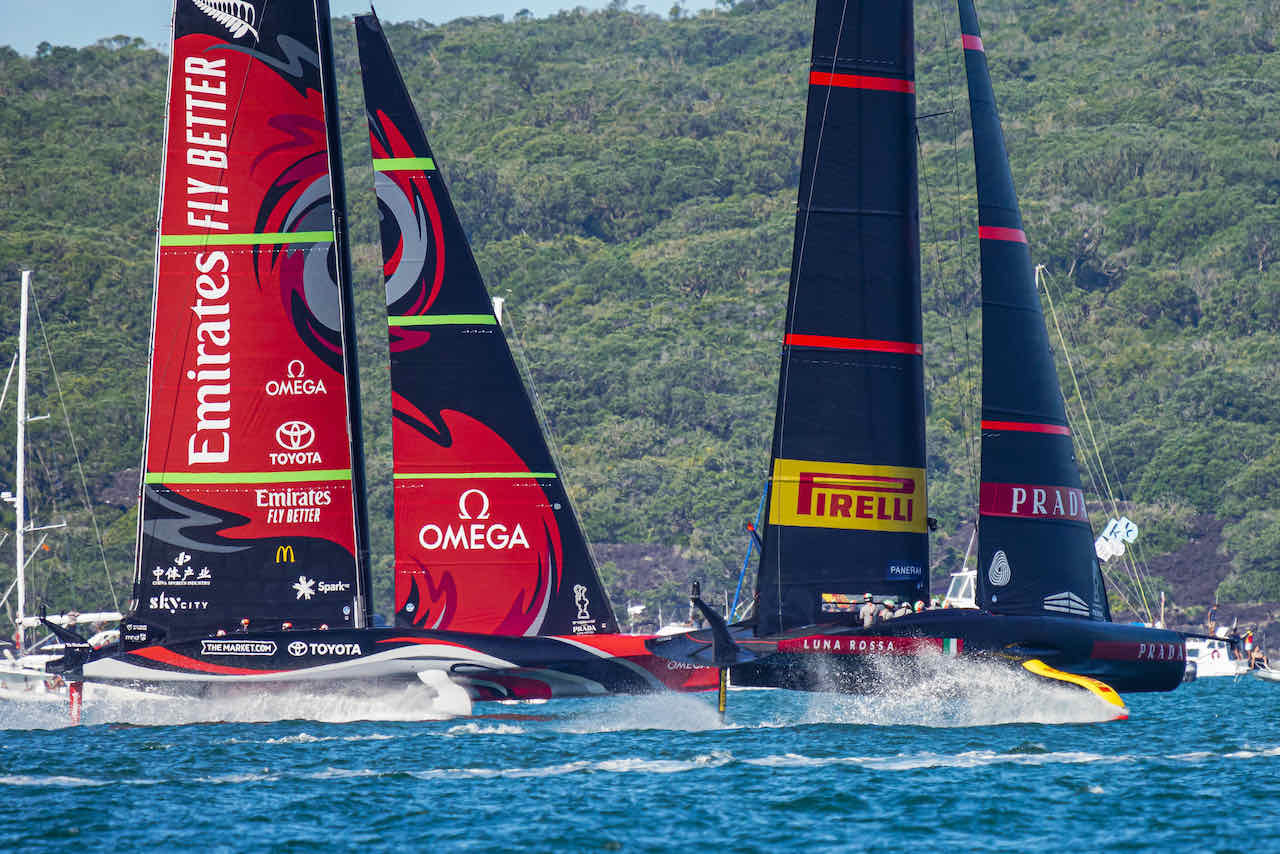 Just as we have seen over the previous four encounters today’s two races were decided in the pre-start.

In the first race of the day Luna Rossa were handed control when the Kiwi boat once again fell off its foils trying to match the Italian’s high and slow mode as both crews tried to burn seconds on their approach to the line. With the Kiwis fighting to get their boat flying again the Italians were able to power through their lee to make a fast clean start.

By the time the New Zealand boat had enough speed to tack and cross the line on port, Luna Rossa were 200 metres into the first windward leg. As we have discovered over the last four races there is really no hope of either of these two evenly matched teams making a comeback from a position like that.

On board the Italian boat co-helmsmen Jimmy Spithill and Francesco Bruni began a tag team upwind covering regime to prevent the New Zealand boat from getting a sniff of the consistently stronger breezes on the left-hand side of the course for virtually the whole race.

That said, the Kiwis should be applauded for keeping cool heads in the start box and for their determined efforts to chip away at Luna Rossa’s lead over the course of the race. As we have seen in previous races, the New Zealand crew know how to keep up the pressure from behind and despite trailing for the entire race they remained a constant threat.

At the finish they had reduced their initial 32 second deficit to just 17 seconds.

Luna Rossa helmsman Francesco Bruni said he was pleased not only with the way the Italian crew had dealt with the pre-start, but the way they had sailed the rest of the race.

“We did a very good job on the start and again it proved to be an important part of the race,” he said. “We had a little bit of an edge for the left before entering. That’s why we decided to lead on that pre-start. I am glad we did and I’m glad it was the right call.

“But I also think we sailed a lot better than what we did in the second race yesterday. We did some very clean manoeuvres, and we sailed a lot cleaner. The performance of the boats were both up there.

“I think we have a more flexible [foil] package. We can do the high mode, we can do the fast mode. In general Team New Zealand seems to be forced to sail higher boat speed numbers, which sometimes is good ,but sometimes is a bit of a limit. I am very happy to sail in these conditions.

“During the race we kept looking, but the right was not looking as good, so we were happy to be able to push them to the right side,” Bruni concluded.

Understandably a little dejected looking after the loss, Emirates Team New Zealand helmsman Peter Burling, explained what had happened in the pre-start like this:

“We obviously just fell off the foil above them and thought we had a little more time to kill than we actually did and didn’t quite manage to get going again and take off. They shut down the race pretty well from there.

We fought relatively hard and got close-ish at the finish, but they didn’t give us too many options. We managed to get a few little shifts and managed to get back into the centre of the course at times. We are really happy with how the boat’s going but obviously they are sailing pretty well, and we need to do the same.”

If the Kiwis gifted the pre-start to the Italians in race five, then the favour was returned during the wind up to race number six.

Immediately after entering on starboard Peter Burling threw the New Zealand boat into a fast gybe to follow the Italians out towards the right-hand edge of the start box. When the Italians gybed around to make their return to the line, Burling opted for a tack which set him up well to windward of the Italians.

Everything looked set up for a close start with Luna Rossa likely to be able to take the leeward position off the line. But all of a sudden they were in trouble, struggling for speed and soon after they dropped off their foils.

Seizing the advantage Burling bore the Kiwi boat away to accelerate and tore over the top of the down speed Italians. At the start gun the Kiwis were sailing nine knots faster than Luna Rossa as they ripped away up the first windward leg.

From there it was a horizon job. Burling and Co. extended on very leg to take the race win by a margin of one minute and 41 seconds – the largest delta we have seen so far in this series.

This time it was Luna Rossa starboard tack helmsman Jimmy Spithill’s turn for a rueful summary of what went wrong in the pre-start.

“We were happy with our positioning but unfortunately we got caught in a real light spot and we just could not get the boat going back to the line,” he said. “Almost a bit of a reversal of the first start where the other guys fell into a light spot and couldn’t get going.

“So it was unfortunate, but then not a lot of passing lanes from then on – it was just too big a jump after the start.”

On board the New Zealand boat as it crossed the line Glen Ashby could be heard to say: “The regatta starts tomorrow.” That pithy summation perfectly sums up the situation the two teams find themselves in at this stage of what is proving to be a fascinatingly nip and tuck match racing series.

As Jimmy Spithill pointed out in a post-race interview, both teams will take positives and negatives out of today’s two races as they try to debrief and prepare for tomorrow’s encounter.

“The goal as always is to win one at a time,” he said. “We are not looking too far ahead. Each day we come in and try to focus on the one ahead. There will be quite a lot of lessons learned from both races today. We will go back – as will I’m sure the other guys – and really just try to come back fighting and ready to roll.”

Two more races tomorrow, means another opportunity for one of the teams to break the deadlock by turning in a two-victory scorecard. The psychological impact of going five to three up in a first-to-seven points series would be immense. Both teams are doubtless capable of pulling that off, but at this stage, which of them it might be remains a mystery.