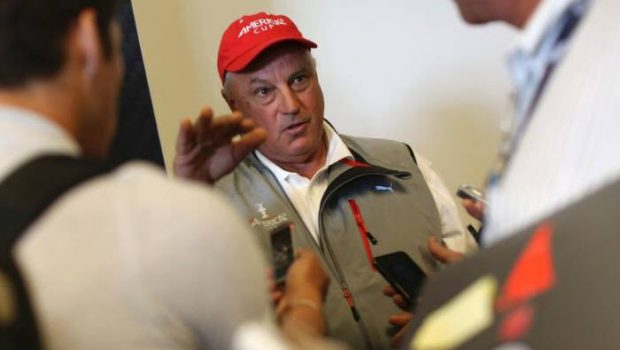 Renowned international yachtsman and regatta official Iain Murray will once again take the reins as the independent Regatta Director for the 36th America’s Cup presented by Prada, the Prada Cup Challenger Selection Series and the America’s Cup World Series Auckland including the Christmas Race.

It will be the third time for the renowned international yachtsman and regatta official to hold this prominent position.

Jointly appointed by the Defender Emirates Team New Zealand and the Challenger of Record (COR36), Iain is taking over from John Craig, who stepped down from the position late last year.

With his solid background and reputation of yacht designer, skipper and yachtsman – including the participation in four America’s Cup campaigns and several world championships in different classes – Iain Murray is a unanimously respected figure in the world of international yachting, and the America’s Cup in particular.

This will be the third time that Murray has held this prominent position, after having been appointed from 2010 to 2017 in the dual role of Regatta Director (34th & 35th America’s Cup) & CEO of America’s Cup Race Management (ACRM).

His longtime knowledge of the Waitemata Harbour will be an additional guarantee of fair racing for all the competitors as it will be a return to the place where he made his first marks on the international sailing scene, with two notable wins.

The first was as a 17-year-old student where he designed, built and sailed a 12ft skiff, Sunset Hotels, to win the 1976 Interdominion 12ft skiff title on his second attempt from a fleet of 24 boats from Australia and New Zealand.

He returned a year later to win the JJ Giltinan Trophy, the unofficial world championship of the 18ft skiff class.

In his capacity of Regatta Director Iain Murray will also oversee the training of all personnel and volunteers involved in the racing, security, rescue, and on-water management of different areas.

Grant Dalton, CEO of Emirates Team New Zealand said: “It is very gratifying for us to have secured the services of such a respected official as Iain as he brings a wealth of experience and integrity to the role of Regatta Director with a proven track record over the past two America’s Cup cycles. Particularly in his Colour 7 days, Iain was my hero, I don’t think we ever beat him.”

Matteo Plazzi, Technical Director at COR 36, declared: “I have known Iain for many years and I have witnessed his deep knowledge, competence and understanding of yachting and racing. The experience as Regatta Director he has developed in two “foiling” America’s Cup cycles and the fairness he demonstrated during those years will be a prominent asset of paramount importance for conducting the racing with this unprecedented class of yachts”.