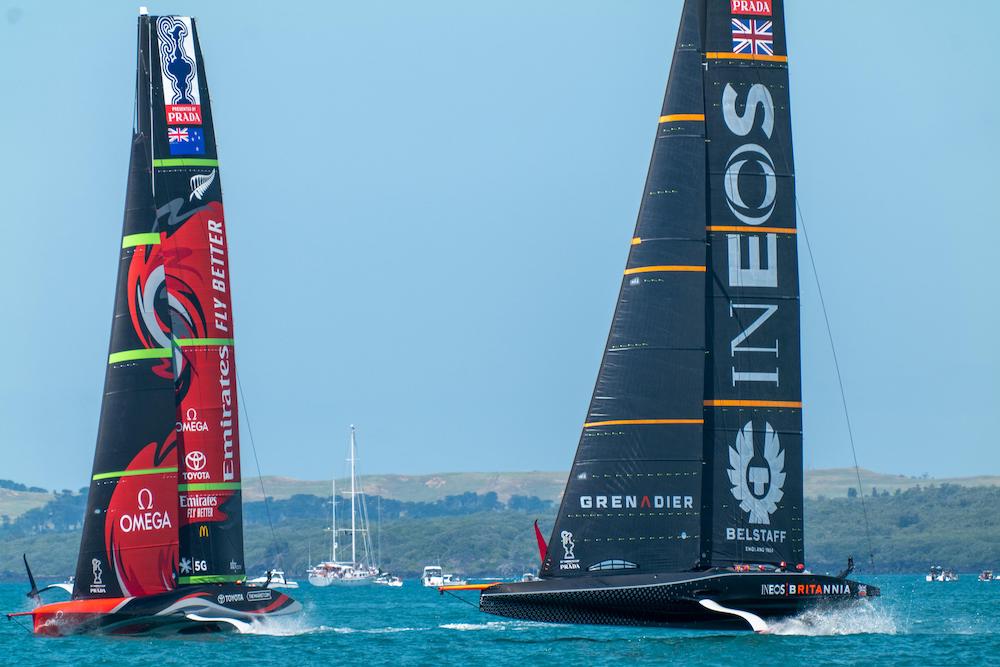 Last weekend’s long-awaited America’s Cup World Series regatta in Auckland was the first time teams had ever raced their amazing AC75s in official competition. Here’s five key things we know now that we didn’t before the regatta.

True, we could have guessed or assumed this fact, given that, as the Defender they came up with the AC75 concept and the class rule, and so have had longer than the others to develop their design. But we didn’t know for sure, and we didn’t know how just how much of a performance delta they would have.

It will have come as no surprise to anyone last Friday when the Kiwis strolled away to an easy victory in their opening race against Luna Rossa. The New Zealand crew looked comfortably assured both upwind and downwind and after getting on the right side of two wind shifts on the first beat simply extended their lead leg by leg.

Subsequent races only served to confirm how fast the Defender’s boat is. Even in the races where they blew the start or made mistakes around the course their raw speed advantage was enough to get them back in contention.

In the one race they lost – the one versus NYYC American Magic, where they handed a significant lead to the Americans by being late into the start box after they didn’t get flying soon enough – they were quickly back in contention and it took some heavy windward leg covering from Dean Barker and an excellently sailed final run to keep the Kiwis behind.

So, based on what we saw last weekend, Emirates Team New Zealand are the furthest along the development curve of all the teams at this stage.

2. There is a pecking order, but it is not clear cut

There always is a pecking order, of course, but we didn’t know it before we saw the boats race.

The kicker however is that while the Americans are definitely the number two team to the Defender, there is the narrowest of margins between them and the Italians.

Luna Rossa bounced back from their drubbing in the opening race against Team New Zealand to turn in impressive performances in their other races:

Meanwhile, British have their own major issues to address (see number 3 below) and will likely have cancelled Christmas to get them resolved by the New Year.

3. The British team’s issues are bigger than we thought

Pre-regatta rumours of the British boat having major performance issues are one thing but surely nobody outside of the Ineos Team UK compound could have imagined just how far behind the others the Brits turned out to be.

The America’s Cup attracts the best sailors in the world, but it is first and foremost a design competition.

Ainslie is the most successful Olympic sailor of all time and there is no doubting the credentials the crew he as assembled around him. Equally though, you cannot get away from the fact that design of British squad’s second boat has proved to be a massive disappointment. In a race for flying yachts, one that can’t fly is akin to a pub with no beer.

Britannia was simply painful to watch in the light wind races as the British sailors strove manfully to maintain calm radio communications while no doubt secretly tightly clenching their fists as they urged their uncooperative boat into the air by force of will.

Being lapped in an America’s Cup race is going to take a while to get over for the sailors, but the good-natured banter heard on board that day bodes well for a team that needs to instil a trenches mentality to get them through this sticky situation.

We can all speculate on what is at the heart of the British team’s problems: the foils, the hull, the rig, the sails, the systems and software? But the truth is that the problem probably lies – a little or a lot – in all of those areas.

It’s too soon at this stage, I think, to write them off completely as no hopers. Ainslie has hired some of the best in the business and for sure they will be working flat out between now and the January 8, 2021 deadline when they have to declare their boat configuration for the Prada Cup Challenger Selection Series.

It’s a tall order for sure but no true America’s Cup fan wants a lame duck challenger in the competition so we should all be hoping for a Christmas miracle that sees Britannia transformed and competitive in the new year.

4. Splashdowns cost races, and nobody is immune

It was clear from last weekend’s racing – more so it seems than with the AC50s in Bermuda – that falling off the foils is a race-losing event pretty much all of the time. All the teams showed they were prone to this risk, begging the questions: who were least likely to fall into displacement mode, and who were the quickest to take off again.

Having watched all the racing closely on my laptop, based purely on my gut feel and not on any empirical data whatsoever, I would say that Team New Zealand and Luna Rossa both held a marginal advantage over American Magic on the time required to build the necessary knots of boatspeed to enable take off. Accurate analysis could prove me wrong, of course but either way there is not much difference between all three.

Sailing an AC75 in displacement mode is not pretty to watch – it’s all drag, wide angles and nervous grimaces on the faces of the sailors – but it is something we can expect the teams to be practising in the run up to the Prada Cup.

5. We have a scintillating few months of racing in prospect

Contrary to the naysayers and negative ninnies who pine for a return to the lead mine eras of J Class, 12 Metre, and even IAAC America’s Cup racing, the three days of racing at the ACWS – Auckland regatta produced some truly great match racing that was exciting to watch.

We saw top quality match racing in several of the pre-starts, we had races with multiple lead changes, and several races not resolved until the second half of the final run. What more could we ask for from the prelude regatta to the 36th America’s Cup?

Well, more of the same would be nice – and that seems likely to be on the cards, as all the teams are on a path of constant improvement that will wind its way through the Prada Cup and into the 36th America’s Cup Match itself.

How far up the performance curve they will get by then is impossible to say, but based on what we saw last weekend all but one of the teams are off to a strong start and that can only be good news for those of us planning to follow along over the southern hemisphere summer.