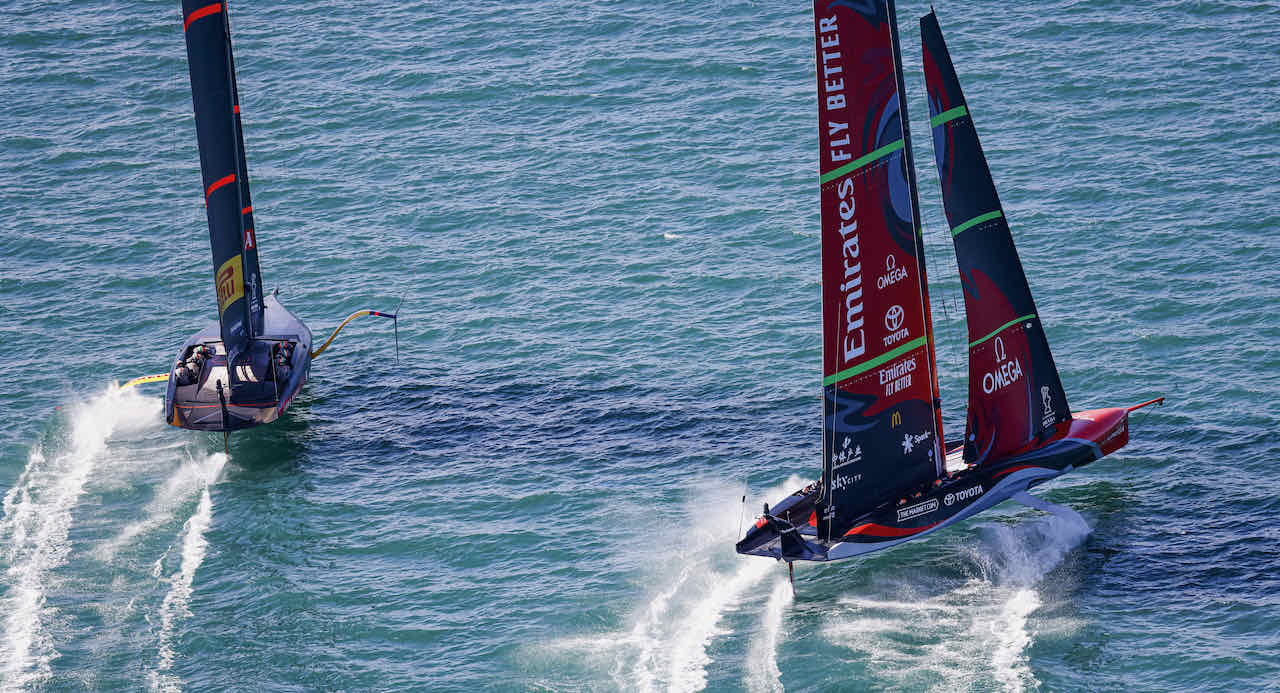 Emirates Team New Zealand has retained the America’s Cup with a comprehensive win over the Challenger Luna Rossa Prada Pirelli Team in the tenth race of the 36th Match series down in Auckland, New Zealand today.

The win – the team’s fifth in a row – delighted the thousands of local fans who had lined the boundaries of race course area C and the shorelines in Auckland to cheer the home team to victory by a score of seven points to three.

Four consecutive wins over the previous days racing had left Team New Zealand at ‘match point’ going into today. Just one win from today’s two possible races would give them the seven points required to clinch the series.

The breeze very much in right phase as the two teams powered into the start box for the tenth time in this 36th America’s Cup Match series and both teams were clearly angling to make a committee boat-end start.

The setup for the return to the line saw the Italians gybe around while the Kiwis tacked around very close to the right-hand boundary to position themselves well to weather. As the seconds ticked down to the start Burling was willing to trail the Luna Rossa boat into the line, but then tacked immediately at the start gun to take control of the right-hand side of the course.

There was no more than a couple of boat lengths in it at the first cross, but Team New Zealand were far enough ahead to drop a covering tack on the Italians. That forced then to straight away tack back to the left, but it didn’t seem to hurt them at all and at the next convergence of the boats they had closed to within one boat length and so had to duck slightly as they tore across the Kiwi’s stern.

Minutes later though it was clear that – whether due to a raw boatspeed advantage or better wind pressure and angle – Team New Zealand were making gains on the left of the beat. When they tacked on to the layline for the right-hand windward gate buoy the Kiwis were able to easily cross the Italians to round seven seconds ahead.

Luna Rossa set up a split by rounding the left buoy and on the downwind leg made gains every time the boats crossed. Team New Zealand put their rivals on the back foot at the leeward gate with a late gybe away from the left mark to instead round the right marker. That left the Italians out of position and forced them to sail lower and slower as they followed the Kiwis around the same buoy.

Burling and the New Zealand crew were now in full control of both the Italians and the race. They kept a loose cover on the trailing boat on that second upwind leg to round 27 seconds ahead at the second windward gate.

From that point on there was no hope of the Italians reeling the New Zealanders back in without a major Team New Zealand mistake or breakdown. By the final windward gate the Kiwis were 49 seconds ahead as they made the downwind turn and flew off downwind for the final time.

The moment the New Zealand boat crossed the finish line to claim their all-important seventh win of the series, the tense expression faces of the Kiwi sailors melted into relieved smiles as they congratulated each other on retaining the America’s Cup on home waters.

“We are absolutely blown away by being able to achieve what we have as a group and win another America’s Cup,” he said. “This has been a most amazing experience along the way.

“It’s absolutely unreal just seeing everyone here on the chase boat – all the people who have been involved in this campaign in the last three years – and seeing how many Kiwis are out here supporting the event again.

“We have had messages from everyone – from the prime minister to high school kids to just about anyone you can think of – of support and it means the world to us as a team.

“I don’t think you can think of a much more special environment than this. Over a couple of thousand boats out every day, the village absolutely packed, people everywhere. To do something like this on home waters is something that I think our home team is incredibly proud of.”

For Luna Rossa the result marked the end of the Italian Challenger’s dreams of bringing the yachting’s oldest and most prestigious competition to the Mediterranean.

They came up short in the end, but as port-wheel helmsman Francesco Bruni explained, the team put up an extremely impressive challenge and will hopefully return for another campaign.

“I want to first congratulate Team New Zealand; they have done a fantastic job,” he said. “But also I think I need to congratulate with Luna Rossa. [It’s] an amazing team. I think we proved to the world that we could do it. It’s been hard luck in the last couple of days but definitely I think we have done a great job as a team.

“It’s been a fantastic experience,” Bruni said. “I can say that it’s not finished. I am sure that Mr Bertelli and Luna Rossa will try again. We have a lot of experience now and I am just very happy with how this team has been run.”

Likewise, Bruni’s co-helmsman Jimmy Spithill began by paying tribute to the performance of the local team and their victory.

“Obviously full credit to Team New Zealand today,” he said. “They have developed a fantastic package and are deservedly champions.”

Spithill also expressed his appreciation of the Italian team which he said had given everything in this America’s Cup campaign.

“I really just can’t thank [enough] the entire team – especially the guys that are on the shore. It’s just been an absolutely relentless campaign. Just to see the passion, the emotion, and the work ethic that the Italians portray, it’s been one of the most enjoyable campaigns in that regard. For me, I have been very, very lucky to have been embraced into an Italian team.”

With the 36th America’s Cup now decided, thoughts inevitably turn to the 37th edition. Rumours have been circulating in Auckland and around the world that should the Kiwis win British billionaire Jim Ratcliffe’s Ineos Team UK would be the new Challenger of Record for a 37th Cup to take place in 2024.

That story – along with the latest bit of speculation that Ratcliffe and Emirates Team New Zealand boss Grant Dalton have been in discussions over mounting a one-off Deed of Gift Match against the Brits in Cowes, England – is yet to be confirmed.

There’s plenty of time for all that in the coming days and weeks. For now, the New Zealand team and their delighted supporters, quite rightly, just want time to fully enjoy their emphatic America’s Cup defence.