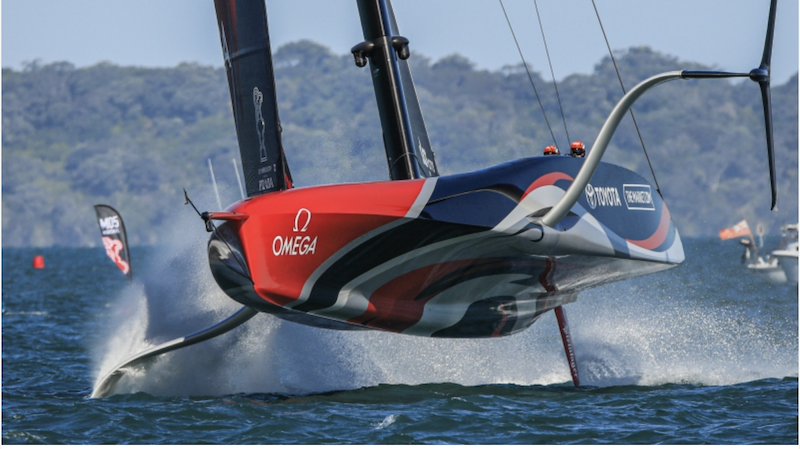 America’s Cup holders Emirates Team New Zealand have hit back at allegations that the supplied equipment foil cant system (FCS) used by all the teams competing in the 36th Cup are a weak link on the four second generation AC75s.

Yesterday at the post race press conference British skipper Ben Ainslie from the Ineos Team UK syndicate cited FCS problems for the teams issues on the water after a day that saw them nearly miss their first race against NYYC American Magic and then crash out of their second race with Luna Rossa Prada Pirelli after completing just one leg.

Ainslie said the team had had problems with the foil cant system on the British AV75 Britannia even before the team left the dock.

“We had to replace the unit,” Ainslie said. “And then when we got out on the water it wasn’t working properly. Before the start of the race we had our engineers down below, madly trying to fix the problem. “They kind of half fixed it and then jumped off the boat and we somehow managed to get to the start line just about on time.”

Asked if he thought the team would be able to fix the issue in time for the second day of racing – Ainslie answered, no.

“I think it is a bit of a wider issue, this foil cant system,” Ainslie said. “It’s been a problem since day one of this class. All of the teams have been working together to solve it, but it still isn’t resolved.”

Ainslie went on to say that there had been talk amongst the teams about whether some form of redress should be given for an FCS breakdown such as the one Ineos Team UK experienced.

“It’s certainly not our fault – this is supplied equipment,” he said, adding: “I would like to call out to Richard Slater [chief umpire] and the rules team – we need to resolve it.”

Ainslie also claimed during the press conference that the team had received a software update for the FCS “as late as midday today”.

So if, as Ainslie is suggesting, the teams cannot be held responsible for the performance of the FCS system, then who can? According to the British skipper, it’s the Defending syndicate – Emirates Team New Zealand who designed the system.

“At some pint that doesn’t all come across. We want to make sure the teams are all learning and helping each other. If we can’t resolve it then at least we need to have some sort of redress for those teams that are unable to race.”

Today Emirates Team New Zealand refuted much of what Ainslie had said in an email to media which essentially said the FCS would work properly if the teams followed the documented “operating and maintenance instructions and programs” supplied to the teams.

The full version of that email read as follows:

The foil cant system (FCS) is a one-design supplied component designed and developed by ACE for all competitors. It has been used since the inception of this class.

How far Ainslie will get with his call for the introduction of a redress system remains to be seen, as according to chief umpire Slater this would require the unanimous support of the Challenger of Record and the Defender.

“We get given rules which we have to enforce,” Slater said. “At this point there is no rule for seeking redress on this point. The rules are voted on by the Challenger of Record and the Defender, and if it is a class rule then I believe it is unanimous decision for nearly all the changes.”

This one looks set to run on for a little while longer.