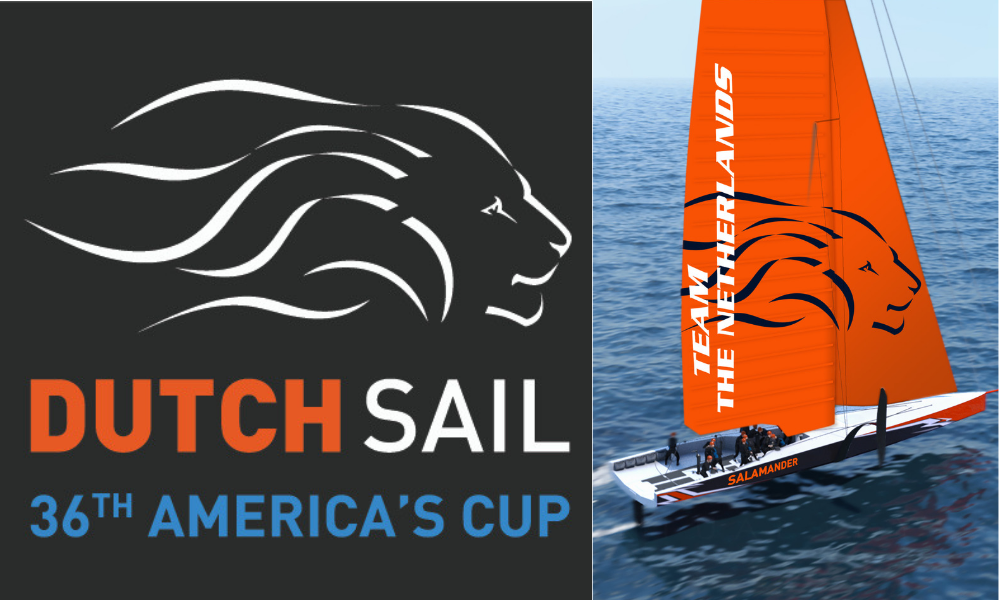 The fledgling DutchSail America’s Cup syndicate – aka Team The Netherlands – headed by Dutch yachtsman Simeon Tienpont has become the first of the current crop of America’s Cup contenders to announce a female sailor as helmsman.

During a press conference at the opening of the team’s headquarters in Scheveningen skipper Tienpont – a double America’s Cup-winner with Oracle team USA – revealed that three-time Olympian Carolijn Brouwer would steer the team’s 75-foot foiling monohull.

Last year Tienpont and Brouwer were competitors in the Volvo Ocean Race when Tienpont’s team AkzoNobel finished fourth overall with Brouwer aboard Dongfeng Race Team becoming one of the first women to win the gruelling around-the-world race.

Tienpont also announced veteran Dutch sailor Pieter van Niekerk as the team’s manager and Dirk Kramers as lead designer. Van Niekerk – who raced alongside Tienpont on team AkzoNobel in the last edition of the Volvo Ocean Race – is a double Olympian and also a two-time America’s Cup winner, having helped Swiss team Alinghi to victory in the 31st and 32nd editions of the ancient competition.

Dirk Kramers has been in involved in 11 America’s Cup campaigns over the years and has been on the winning side on no less than six occasions. His last campaign was the 35th America’s Cup in Bermuda when he was head of engineering for Sir Ben Ainslie’s British team Land Rover BAR.

The Dutch designer has been based in the United States for the last several years where he is a partner in the specialist marine composite structures design and construction company SGK Structures.

According to the press release, the DutchSail syndicate plans to draw heavily on local talent to staff out its campaign.

This applies both for the sailing team – where Dutch sailors ranked best overall at last year’s World Sailing Olympic classes world championship at Aarhus in Denmark – and for the advanced technical skills required to design and build an AC75 yacht, where Tienpont plans to partner with the leading companies in the Dutch maritime and aviation industry.

As the last of the newly formed syndicates to have their America’s Cup challenge accepted the DutchSail squad will have their work cut out to design, build, launch, and learn to sail their AC75 in time for the first scheduled America’s Cup World Series regatta which is scheduled for October this year.

Although not mentioned in the English press release, according to reports in the Dutch media the team is also hoping for an America’s Cup World Series event to take place in Scheveningen in June next year.

Such an event would bring a significant economic boost to the region which proved its capabilities in spectacular fashion last June when it hosted the finish of the Volvo Ocean Race.

At this stage DutchSail is understood to be without any major commercial backers with the campaign so far being funded out of pocket by Tienpont who is believed to have partnered up with global professional services firm Deloitte in The Netherlands to help attract funding for the campaign.