Skip to content
You are here
Home > America's Cup > America’s Cup: Defender and Challenger both win on fascinating opening day 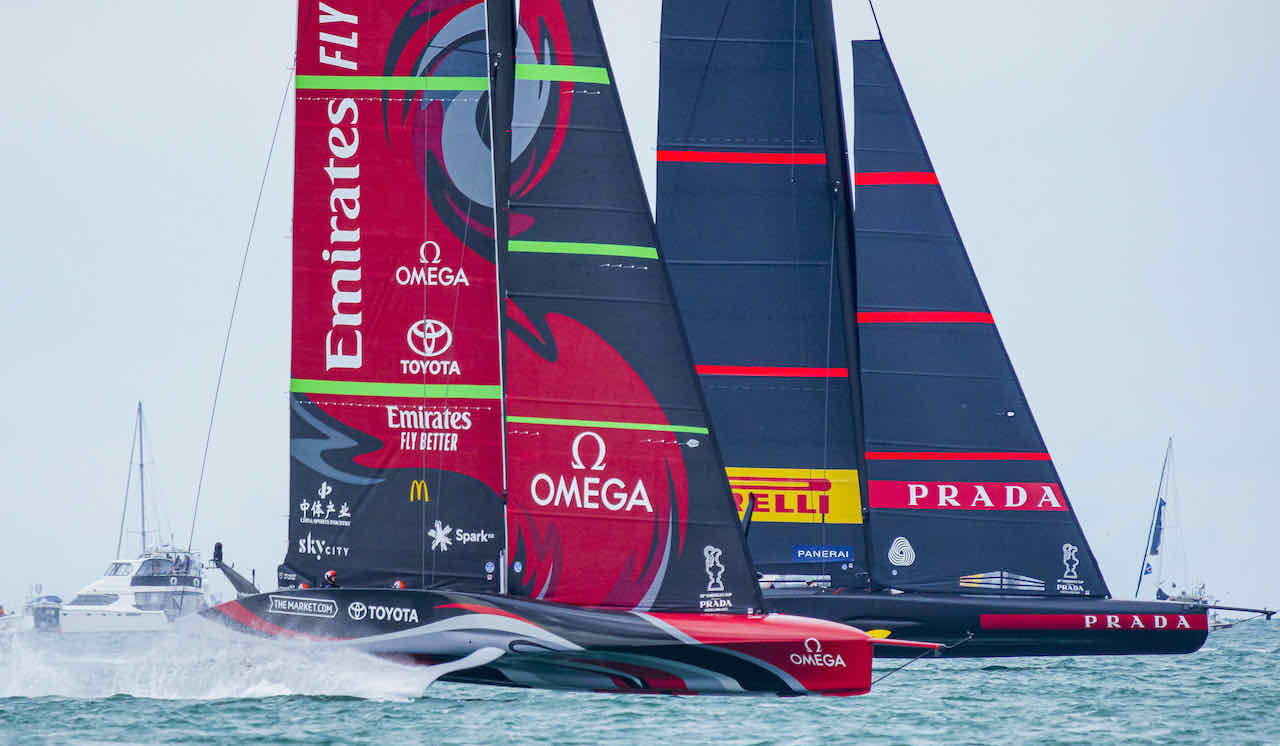 The America’s Cup Defender Emirates Team New Zealand and the Challenger Luna Rossa Prada Pirelli Team have split the points evenly between them on the first day of racing in the 36th America’s Cup Match, with both teams winning race apiece.

The question on the lips of the sailing world over the last few weeks has been which of the two America’s Cup teams might have the upper hand when racing began in the 36th America’s Cup Match.

Today we discovered that in the 12 to 15 knot wind range at least there is very little between the performance of the two boats, with pre-start mistakes largely deciding the outcome of the first two races of the series.

Despite not having raced another AC75 since the America’s Cup World Series regatta last December Peter Burling and the Emirates Team New Zealand crew showed no evidence of any signs of ring rustiness in the opening race of the 36th America’s Cup Match.

Cool, calm and composed best describes the demeanour of the Kiwi crew who powered into the start box from the left hand side two minutes and seven seconds before the start. As Burling sent the New Zealand AC75 deep into the pre-start zone, the Italians made their starboard entry at 01.57 and immediately gybed to follow.

An initial long slow turn up and then a fast bear away and gybe from New Zealand was countered by the Italians who gybed around in front to take up a leading position back to the line.

Having burned off the necessary seconds they needed both crews bore away and accelerated fast towards the leeward end of the line. As the final seconds counted down to the start it was Burling who looked the happiest with his time on distance. Meanwhile Jimmy Spithill on the starboard wheel of Luna Rossa still had some work to do not to be early.

At the gun it was Emirates Team New Zealand who turned up first to make a faster start and begin the first windward leg slightly bow forward in the windward position.

Spithill’s realisation that the Kiwis would likely roll over the top of the Italian boat before the pair reached the left-hand boundary drew an aggressive luff from the Italians to leeward. However the move was easily countered by the New Zealanders and failed to draw a penalty from the umpires.

This left the Italians with no option than to tack away to clear their air. That put the Kiwis in firmly in control, but as the first leg unfolded it quickly became clear that the two teams were evenly matched upwind with virtually nothing between them in terms of straight line or VMG performance.

Emirates Team New Zealand led around the left-hand gate of the first windward gate by 14 seconds (around 260 metres). By the leeward gate they had eked out a further nine seconds of advantage to take into the second upwind leg.

Despite the Italians forcing a split at the leeward gate by rounding the left buoy on two boards, the Kiwis seemed largely content to sail their own race. As a result Luna Rossa were able to eat a little into their deficit to trail at the second windward gate by 19 seconds.

That delta was down to 17 seconds at the final leeward gate where the Italians once again split to the left buoy but then immediately tacked into a left-hand shift. Despite seeming to make further gains on this final upwind leg, at the last windward gate the Italians followed the New Zealand boat around the left mark still 20 seconds adrift.

With Luna Rossa now all out of attack options, the final downwind leg saw Emirates Team New Zealand extend throughout to take the race by a margin of 31 seconds.

A thirty-one-second loss is hardly a drubbing, but the question now was how the Luna Rossa Prada Pirelli Team crew would respond? Could they put the loss behind them and bounce back with a confidence-boosting win to level the score?

If Luna Rossa had been the weaker in the first race pre-start then it is fair to say that the Kiwis were the ones making the mistakes in the run up to the second start. Having set themselves up in a strong position way to windward with a minute to go to the start, their subsequent deep dive around the stern of the Italian boat was not executed well.

At the critical point of rounding up the Kiwis skidded sideways, leaving them trailing the Italians into the line and then forced to tack on to port at the gun. The skid drew an expletive from Burling who in that instant knew he had lost control of the race.

In the previous race when the Kiwis were ahead they had seemed content not to engage in too many hard cover tacks – perhaps out of respect for Luna Rossa’s renowned tacking ability. In the second race however the Italians were keen to take advantage of their superior manoeuvrability and slammed the door shut on the Kiwis at every opportunity on the first upwind leg.

That strategy saw Luna Rossa round the left-hand buoy of the first windward gate 13 seconds ahead. One lap later the Italians were 25 seconds ahead.

However the final lap saw the Kiwis rally to mount a strong comeback after Luna Rossa puzzlingly rounded the left buoy of the final leeward gate and immediately tacked away to the right. This allowed the Kiwis to push out the left boundary before tacking. When the boats converged in the middle of the course, what had been a 300 metre plus lead was down to 170 metres.

Despite some heavy cover tacking from Luna Rossa over the rest of that final beat, the Kiwis followed them around the left-hand windward gate marker just 12 seconds down. As a result, the final downwind was a nervous affair for the Spithill/Bruni helming partnership, as Burling continued to close them down. A final surge in the last 1,000 metres of the leg saw the Kiwi boat close to within seven seconds of the Italians at the finish.

Nevertheless, a win is a win and Luna Rossa had done enough to settle their nerves by levelling the score at one race apiece on the opening day of this 36th America’s Cup.

Who will go home tonight the happiest of the two teams is hard to say. Perhaps the Italians will be happy in the knowledge that the Kiwis are not in fact in another league when it comes to performance. Or perhaps the Kiwis have most to be happy about given that they have proved their boat is evenly matched in the wind range that they might have thought would have favoured the Italians.

For his part Jimmy Spithill was justifiably putting a positive spin on the day’s results.

“We had quite a lot of manoeuvres, quite a lot of tacks and we kept the boat going well,” he said. “It was a good sign of strength, I thought, to bounce back after that first one. We followed out plan, we kept it calm and let the boat do the rest of the work.”

“It was one of those race tracks where the lead boat has an advantage. In that first one they were able to get ahead after we didn’t get the penalty, and in that [last] one we were able to start ahead and sort of pick and choose when we had to tack and gybe, and force them to one side.

“It’s great to be competitive, great to get a race win and we are looking forward to tomorrow.”

Meanwhile, although Burling was clearly ruing the costly mistake in the second race pre-start, he seemed generally upbeat about the Defender’s performance on the opening day.

“We definitely didn’t get the best start [in the second race],” he commented. “We kind of quite liked the right looking up the beat so we were quite keen on that windward position. But then we didn’t do quite good enough of a job of the round up and ended up skidding sideways and falling into them.

“That was a bit of a shame and we definitely looked a bit rusty in that one, but it was good to get back into them on that last beat and [then] really show that we are good downwind. It felt like if there had been another lap we might have had a good chance.

“Just one mistake and your life’s pretty hard for the rest of the race. We have got plenty to go home and debrief and I think one thing that the America’s Cup always shows is that it’s the person that wins the last race that’s going to win it.

“We are pretty happy to get one race on the board and move on into the weekend.”

This [wind range] is where – looking at the other team and the way they have changed their boat – that we feel they should be pretty strong. We definitely felt like the boats were pretty even today; you had to do the right things and sail the shifts.

We made a few mistakes on tacks and stuff, which you could say was rust – or just a mistake.

“We are pretty happy that we have got a tool here that we can win this thing with,” he concluded.

The rest day scheduled for tomorrow, Thursday March 11, is likely to be an anxious 24 hours for both teams as the shore crews tinker with the boats and the sailors ponder the mistakes of today ahead of Friday’s resumption of racing.