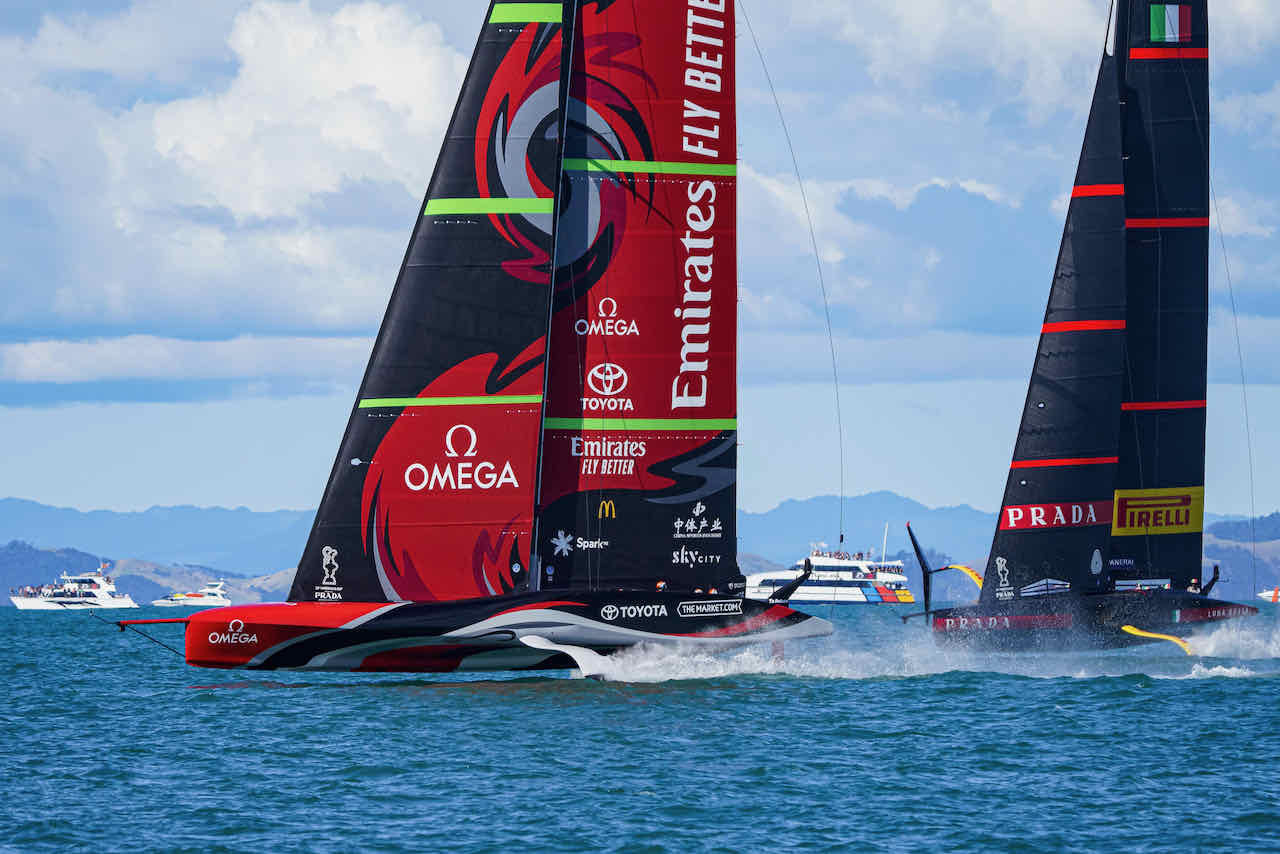 The second day of racing in the 36th America’s Cup Match saw two races sailed in sub-10 knot conditions, with the Defender Emirates Team New Zealand and the Challenger Luna Rossa Prada Pirelli Team both taking home a point each to leave them tied on two races each in the first-to-seven-points series.

As with the match’s first two races on Wednesday both encounters were decided early. The Italians quickly took control after the first boundary tack in the first race, while the Kiwis were in charge soon after the start in the second.

There were no dramas in the pre-start of the first race. The Kiwis opted to gybe inside the Italians at the right-hand boundary of the start box to lead back towards the start line. But the New Zealanders looked a little uncertain on their foils in the 10-knot breeze and that gave Jimmy Spithill on the starboard wheel of the Luna Rossa AC75 control of his positioning.

At the gun the Kiwis came off the line low and fast at the pin end, while Spithill had managed to get plenty of separation to windward and was sailing higher, if a fraction slower.

Luna Rossa reaped the benefits of this scenario as soon as the two boats simo-tacked off the left-hand boundary. Now in the controlling lee bow position, Francesco Bruni on the port wheel of the Italian boat switched to a high mode that the Kiwis simply could not live with. Unable to build enough speed to tack away, after 15 seconds of struggling Burling had to concede defeat and bear way to leeward of his rival’s track.

From that commanding position the Italians began the task of shutting the race down. A deftly executed sequence cover tacks on that first windward leg saw them round the first windward gate 10 seconds ahead.

Despite making gains on the first downwind leg by way of better exit speeds and angles from their gybes, an extra late gybe at the leeward gate saw the Kiwis round the leeward gate 13 seconds adrift.

More determined cover tacking from the Italians extinguished any hopes the New Zealanders had of finding a shift or better pressure to try to mount an assault on the lead. At the second windward gate the Challenger’s lead was up to 27 seconds.

The second downwind saw a tiny gain to the Kiwis but they still trailed by 22 seconds at the final leeward gate. More ruthless covering from Spithill and Bruni on the final upwind leg resulted in them rounding the last windward gate 38 seconds ahead – an advantage they maintained comfortably to the finish to take their second win of the series.

Asked about the victory after the finish of that race, Bruni was quick to pay tribute to the work done by his co-helmsman Jimmy Spithill in the pre-start.

“He did a fantastic job on the start, realising they were under the committee [boat end] layline,” Bruni said. “We had a good separate [separation to the] right there and as you all know the separate right is a good start 80 per dent of the time.”

Commenting on his deadly lee bow manoeuvre that had enabled the Italians to take control early in the race, Bruni had some sympathy for the Kiwi crew, who he said found themselves in a tough spot.
“Even if you have a better boat, when you are in an uncomfortable position tight to windward, it’s always hard,” he said.

If that Luna Rossa lee bow manoeuvre was the key moment of the first race, then it’s fair to say the second race was decided by an even more effective lee bow move by Emirates Team New Zealand straight off the start line.

Having acknowledged that he had given the Italian boat too much opportunity to gauge off him to windward in the first pre-start, Burling made certain of not repeating that mistake in the second race pre-start.

Having led Luna Rossa over to the right-hand side of the start box, Burling then gybed around to make his approach to the line. Meanwhile Luna Rossa tacked to position themselves well up to windward.

With the seconds ticking down to the start, the Kiwis briefly looked a little unstable on their foils in the sub 10 knot breeze as they tried to close in on the start line. Smelling blood in the air Spithill dived down behind the New Zealand boat in search of the chance to hook them to leeward. At the very last second however the Kiwis popped back on to their foils and accelerated for the line.

This left Spithill with no hope of establishing a safe gap to windward and although the two boats made even starts, Luna Rossa was immediately suffering from disturbed air from the towering New Zealand sail plan so close to leeward and was quickly forced to tack away.

When the boats converged minutes later there was no more than a couple of boat lengths in it as the Burling tacked on to starboard directly ahead of the Italians to bounce them back to the right of the course.

After a long spell on starboard the New Zealanders were then able to cross easily as the boats converged for the second time, and at the first windward gate the Kiwis rounded nine seconds ahead.

The first downwind leg saw them extend that lead to 34 seconds at the first leeward gate. From there on there was no opportunities for the Italians to stage a comeback. The Kiwis were in the groove and pulling out distance on every leg. The Italians meanwhile looked rattled at times, rushing so much through one gybe that they turned the boat well before the new board had fully gone down.

At the finish the New Zealand crew took their second win by a margin of a minute and three seconds to level the series score at two races apiece.

“That was a really good race for us,” said New Zealand’s flight controller Blair Tuke.

“[We] just got off the start line better than the race before. Very similar positionings, but we just managed to get the jump on them before the boundary. The boat’s going really well and we managed to extend nicely.

“In that first race we couldn’t manage to get clear,” Tuke said. “They kept lamping on us and we didn’t have much fresh air. “But in that second race we got in front and the boat was going well again. It’s a lot easier without the wind shadows so you are free to look up the course and pick the shifts on your terms a little bit more.

We are now four races into this first to seven points series we are still no closer to knowing who will emerge as the winner. If anything the gap between the teams is narrowing.

On Wednesday we saw each of them win races in medium conditions when the winds were largely in the 10 to 15 knot range. Today when the wind didn’t break the 10-knot barrier we have seen them split the points again.

The two boats clearly have different performance characteristics – upwind the Italians look high and fast and able to exit their tacks better, but downwind the situation appears to be reversed, with the New Zealand boat looking quicker out of the gybes and consistently able to sail lower angles. Overall though the performances average out the same

With so little to choose between the two teams clean starts and establishing an early controlling position will continue to be the keys to success as this series unfolds over the coming days.