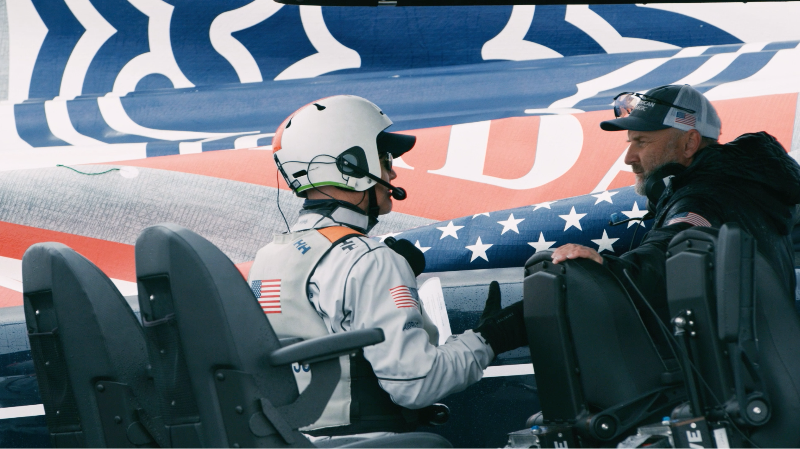 How do you go about coaching the best sailors on earth? How do you guide America’s Cup winners, Olympic champions, engineers, athletes, Ph.D.’s, artisans and innovators? All are essential to success, all are at the top of their field, and perhaps consequentially, all are problematic to forge into a cohesive unit.

For 16-time World Champion coach James Lyne, the answer lies in both the process and the intangibles.

“With American Magic, it’s my job to try to balance two things,” reports Lyne from his mountain farm as he prepares to leave for Auckland. “How do we sail the boat fast enough to win, and how do we produce the intangibles of a team, the winning mindset? There’s no off-the-shelf ‘Bill Belichick cookbook’ that says ‘if you have this amount of magic pixie dust and this amount of Tom Brady, that we’re going to end up winning.’

“So that’s a little bit of where a coach comes in, and the input of proven leaders and winners like Terry [Hutchinson], Dean [Barker], Goodie [Paul Goodison], Andrew [Campbell], Marcelino [Botin], Anderson [Reggio], Tim [Hacket], Tyson [Lamond] and many, many others.”

Each sailing session onboard DEFIANT, the team’s first of two AC75’s, generates terabytes of data and seemingly equivalent volumes of observations and opinions. Without coaching, the pursuit of progress and breakthroughs could easily obscure the end goal: victory in March of 2021.

“It’s going to be a continuing internal struggle, this Cup, because you’ve got to have enough design power that you’re fast enough. But we’ve still got to be able to sail the boat well enough around the course to extract that potential,” says Lyne. “So what’s the coach’s role? I’ve been around long enough, and been a part of enough winning regattas, that it comes down to leveraging the individual strengths of your people.

Guys like Terry are incredibly good at building “juggernaut trains” like Bella Mente and Quantum Racing. Key to those juggernauts are a design team, a shore team, a sailing team, and a production team, and keeping them in sync. The coach can make sure that the juggernaut stays on track on both the strategic level and during debriefs. To make sure that it doesn’t get deflected, or get going down dead ends. That often just means tapping gently on the sides of the train to keep it going straight.”

With American Magic sailing operations suspended since early March due to COVID-19 and a shipping period to Auckland, feelings of urgency, excitement and ambition will be at high levels when the team reconvenes at its new base in New Zealand. Lyne said that the U.S. Challenger’s operations at the America’s Cup venue will require even greater levels of discipline, and that the American football analogies will continue to apply.

“From whenever we start sailing in Auckland, there’s going to be a path to winning the Cup that fits within the number of days we have left,” said Lyne, who grew up in Whitby, North Yorkshire, England, but is a longtime resident of Vermont. “How we choose that path is the main determiner of our success. The longer we’re unable to sail, the harder and narrower our path becomes. We’re going to need everybody’s enthusiasm because we are about to begin what I call our ‘two minute drill.’ We’re going to be calling ‘audibles.’ The days of early testing in Newport and Pensacola, where we could look at some specific piece of software or hardware for a full day, that’s going to change in Auckland. The days are going to be multitasked to a much greater degree.”

In terms of success factors for the final months of the campaign, Lyne was quick to produce two.

“The first and biggest thing is ‘people management,’ because we could easily burn people out. Our sailors, shore crew and the performance analysts in our program have to be fresh enough that we are able to compete to our maximum potential. Second, we need to sail our boat for enough days and hours that we’re good enough to win the America’s Cup. These factors don’t really compliment each other, and that’s the challenge.”

With no AC75 regattas yet held, and with ACWS Auckland, the Prada Cup and the 36th defense of the America’s Cup still months away, Lyne sees an intriguing competitive landscape between Emirates Team New Zealand, Luna Rossa Prada Pirelli, and INEOS Team UK.

“For better or worse, all the teams are in a position where they haven’t done enough sailing yet because of the one-design foil arms delays, the pandemic, shipping around the world, and their own unique issues,” said Lyne. “Nobody’s been able to execute their campaign just as they have wanted to. It’s just how we deal with it from here, and how we execute from the moment we get to Auckland.”