Skip to content
You are here
Home > America's Cup > America’s Cup: Challenger skippers meet the media ahead of Prada Cup opening round 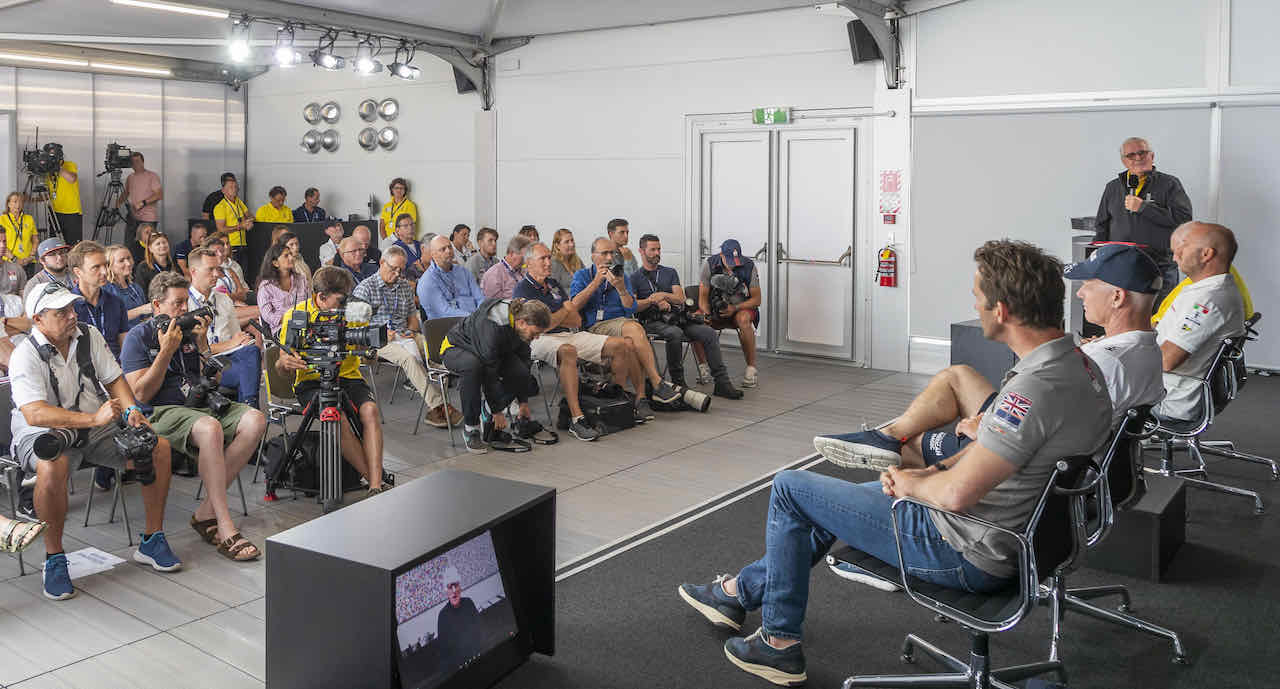 If body language and general demeanour are anything to go by then the most assured performance three skippers by a long way was American Magic’s Hutchinson who gave thoughtful and measured responses to everything that was asked of him.

Asked what he thought were the most important improvements the teams would be looking to have made by the time the Prada Cup begins, Hutchinson paused for a second before giving his considered reply.

“You would never turn away more boat speed upwind,” he said. “We [the teams] are all pushing to get faster at every area of the race. We looked at where we thought we were weak against the others – straight line speed and keeping Patriot out of the water – as both of those factors contribute to boatspeed.”

By comparison, Luna Rossa skipper Sirena – the only one of the three not part of their team’s racing crew – looked increasingly preoccupied as he fielded his questions.

When asked whether the fact that Luna Rossa would have to race with their running back stays in place in the Prada Cup would have a negative impact on the Italian AC75’s performance, he fixed his questioner with a steely stare before replying. “Actually, I’m not sure if I need to or not,” Sirena said. “Because there is still an interpretation on the table.

Which team Sirena was referring to when he later commented testily: “There are some people who are changing the class rule almost every day,” was not clear – but presumably this, for some reason, was a dig at the Defender Emirates Team New Zealand.

When he was asked another question about changes to the Italian boat, Sirena cautioned people from focusing solely on individual elements of the AC75 like the hull, the sails, or the underwater appendages.

“People still underestimate how important the control systems are with these boats,” he said. “Plus you need to look at the whole package and how it all works together.”

Meanwhile Ainslie – the skipper of the beleaguered British team which spectacularly failed to impress in the America’s Cup World Series – Auckland regatta – had (understandably, perhaps) a fixed look of resignation as he batted away a flurry requests as to whether the Brits had made enough changes be competitive or not in the Prada Cup.

He answered most of these with his normal politeness and wisely without overcommitting on the gains the team has made over the Christmas and New Year break.

Asked what winds he was hoping for, he was as open as he dared: “For sure we need to be able to be competitive across the wind range. We would love to race in the stronger breezes.”

Asked, along with the other skippers, to give as a percentage an indication of how much their boat had changed since the first race of the ACWS – Auckland regatta, he finally appeared to have had enough:

“Well look,” he said, narrowing his eyes. “We have got a new rudder, a new elevator, a new mast, a new mainsail, new headsails, we put made aero modifications to the hull, and we have changed the systems to the hull – so we have been quite busy.”

Racing at the Prada Cup begins on Friday January 15 at 1500 New Zealand time when Ineos Team UK will take on NYYC American Magic in the first match, followed by the Brits again against the Italian Challenger of Record Luna Rossa Prada Pirelli Team.