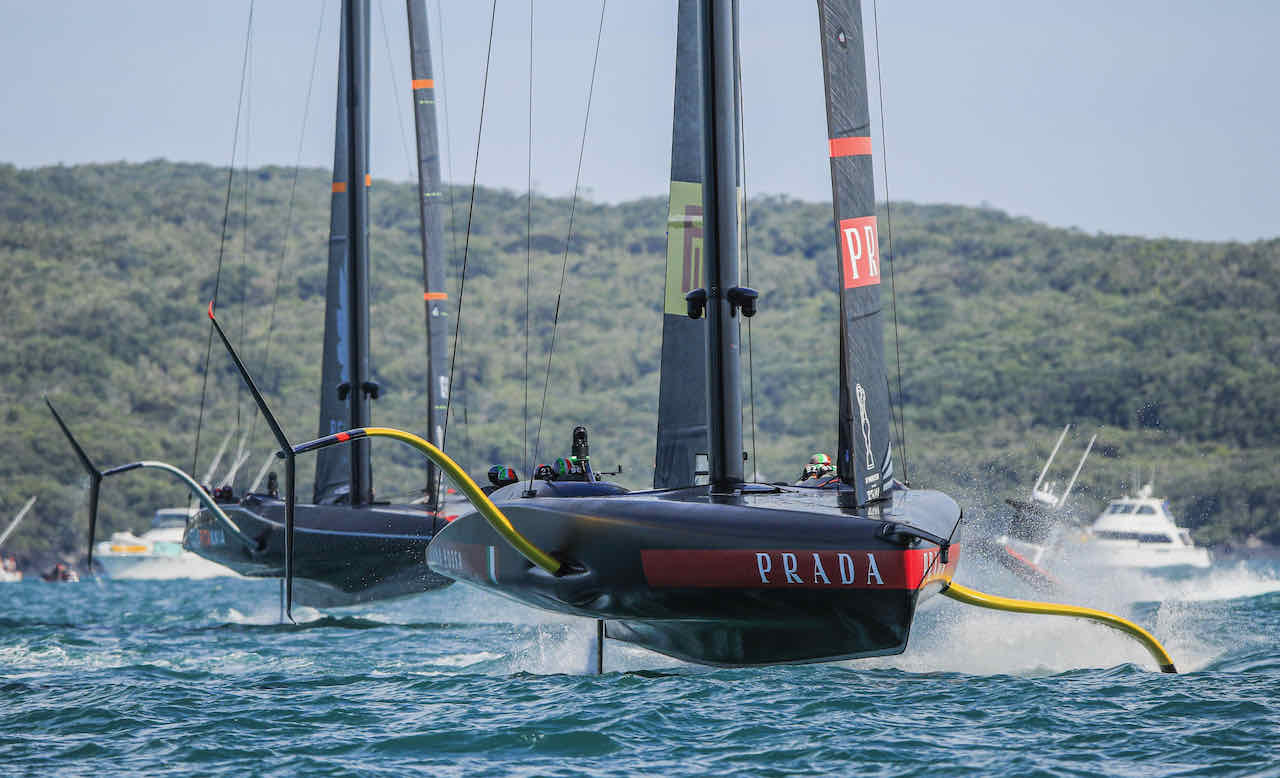 The well-tried-and-tested adage that the fastest boat always wins the America’s Cup also proved to be true of the Prada Cup today as the superior performance of the sleek red Luna Rossa Prada Pirelli Team AC75 delivered the two additional race wins the Italians needed to close out the first to seven race series.

Hamstrung by the sub-par abilities of their boat in the medium to lighter end of the wind range the British Ineos Team UK crew sailed their hearts out in both races but ultimately had no answer for the superior speed capabilities of the Italian boat around all around the race course.

In the first race of the day British skipper Ben Ainslie and his tactician Giles Scott did everything they needed to do to in the prestart period, to outmanoeuvre the Italian helming duo of Jimmy Spithill and Francesco Bruni and eke out a slight lead in the leeward position at the left-hand end of the line.

As the boats flew in close formation towards the left-hand boundary Ainslie was doing everything he could to squeeze up to windward and force Luna Rossa into tacking away. However despite Ainslie’s best efforts the British managed to hang in long enough to make it to the boundary.

Then, when the teams simo-tacked to the right, it was Francesco Bruni on the port wheel of the Luna Rossa AC75 who was able to put the squeeze on the British boat. It didn’t take long for Ineos to have to bail out and tack away, leaving Luna Rossa free to sail fast towards the better breeze and favourable current on the right-hand side of the course.

Despite a fluffed covering tack when the boats next converged, the Italians were well and truly in control of the race.

From there on in there were no more mistakes from the Luna Rossa crew. Taking full benefit of their obvious superior boatspeed upwind and downwind they extended their lead at every windward and leeward gate to take their sixth victory of the series.

The Italians were now on match point in the Prada Cup Final series, while the British were teetering on the brink of an exit from the 36th America’s Cup.

“They are going about two knots faster, so it’s pretty hard to race against that,” he said. “We know their boat means they have got the legs on us in this breeze. We have been trying everything we can to get on top of it – but clearly we can’t.

“It’s that balance between trying to make something happen at the start or not. Clearly an even start isn’t going to cut it against a boat that is performing that much better.”

Ainslie’s final comment gave a clue to the feisty pre-start we were about to witness at the start of the second race of the day.
The British went straight into attack mode the moment they entered the pre-start zone. After gybing immediately at the starboard start mark they chased the Italians out towards the right-hand boundary, before executing a tight gybe across Luna Rossa’s bow to then lead them back to the start line.

The Italians got the fastest start on starboard but were over early and had to drop back to clear their penalty. The British meanwhile pushed out to the right-hand boundary before tacking and heading back towards the middle of the course.

The first cross went to the British as the Italians were not close enough for a lee bow tack and so had to take Britannia’s stern. But minutes later when the boats next came together once again it was the Italians who were ahead and from there the race quickly settled down in to a now all too familiar pattern.

Despite the best efforts of the Ineos Team UK crew they simply had no answer for the pace of their Italian rivals and once again, slowly but surely Luna Rossa eased away on every leg of the course to take the precious seventh win they needed to earn them victory in the Prada Cup and a place in the 36th America’s Cup Match against Emirates Team New Zealand.

Nobody can argue that it was not was a well-deserved victory. Aside from the performance advantage of their boat, the Luna Rossa crew had made very, very few mistakes in the latter stages of the Prada Cup. Their comprehensive dismissal of the British confirms they are in every way to be the right team to face the New Zealanders.

For the Ineos Team UK crew now, although the dream is over for another cycle they can surely take some comfort in staging a much more competitive campaign than in Bermuda at the 35th America’s Cup.

As a team they gave it everything they had got – both on the shore and on the water.

Their transformation from helpless ugly ducklings in last December’s America’s Cup World Series – Auckland regatta, to self-assured soaring swans in the round robin section of the Prada Cup was a truly remarkable feat, of which they should be proud.

And they kept fighting right up until the death. Ultimately though there was nothing they could do to negate the smooth sailing and clear performance advantage of their Italian rivals.

“We said before that last race that we wanted to come out and swing hard in the pre-start and I think we did that,” said Ineos Team UK tactician Giles Scott. “We took it to them as much as we could – just unfortunately in the conditions we had today we didn’t have enough to stay ahead.

“We have been pretty acutely aware of that weakness in sub-11 knots,” Scott said. “I feel like we have done a real good job as an organisation as a whole to really bridge that gap as much as we can. But it wasn’t enough.

“The Luna Rossa boat is geared up really well for the really light breeze and the majority of this series has been sailed in moderate to light winds. So we are bitterly disappointed, but not overly surprised at the way it has panned out.”

Now we must turn our attention to the tantalising prospect of next month’s America’s Cup Final Match between the victorious Challenger – Luna Rossa Prada Pirelli Team – and the Defender, those home town heroes Emirates Team New Zealand.

The fact that virtually nothing is known about the relative performance of these two teams at this stage of this 36th America’s Cup cycle means we can only speculate over who might come out on top.

Might the extra Challenger Series racing that the Italians have enjoyed on their way to the final give them an advantage over the Kiwis, who have had to train alone? Or will the rumours circulating around Auckland and beyond that the New Zealand boat is several clicks faster than any of the Challengers turn out to be true?

For now at least I’m afraid we will just have to wait and see.