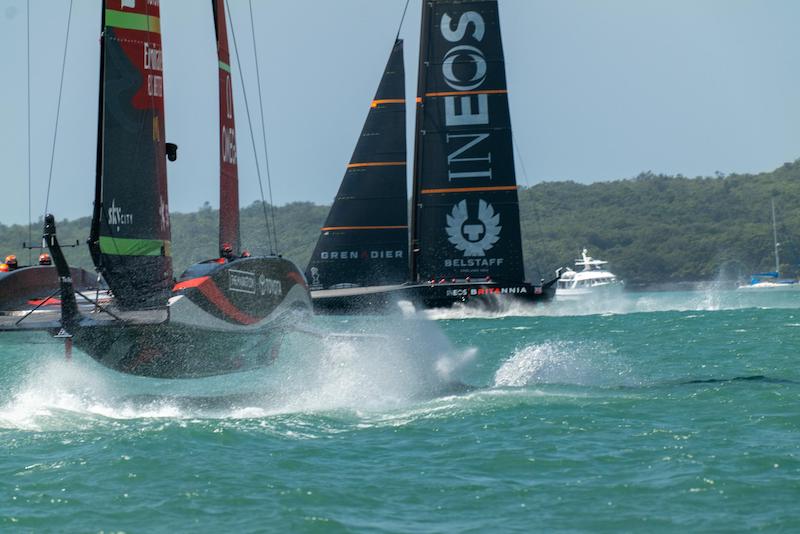 The second day of the America’s Cup World Series event in Auckland New Zealand delivered four more solid match races out on the waters of the Hauraki Gulf today. Her is how Yacht Racing Life editor Justin Chisholm saw it on his computer.

In terms of points, the America’s Cup holders Emirates Team New Zealand should be the happiest tonight, having chalked up maximum points with two victories over the British Ineos Team UK crew in the last race of the day.

That said Ainslie’s team looked very much improved from yesterday when they suffered a series of technical breakdowns. There were no signs of problems on board Britannia today and although they were clearly not a slick or fast through the tacks and gybes, they seemed fast and comfortable in a straight line all day.

It’s not where the British would want to be at this stage, but it is a huge step forward from yesterday and hopefully marks the beginning of better times for the team as the Prada Cup Challenger Selection Series looms ever larger.

Meanwhile, despite winning twice against the Brits, the Kiwis were far from perfect today.

Late into the start box in the first race they managed to win the start after an aggressive dial down attempt from Ainslie didn’t draw the expected penalty out of the umpires and allowed Burling to start the race ahead and to leeward.

Then there was a heart stopping moment when – despite urgent calls from Glenn Ashby to slow his turn – Burling looked set to collide at speed with the right hand windward gate mark. “Listen to my comms,” Ashby said somewhat sternly afterwards. “Sorry,” was Burling’s bashful reply.

Later that race the New Zealand boat’s rudder appeared to stall out during a gybe causing a huge bow up and crash down. They recovered quickly but lost a lot of ground to the chasing Brits.

Nevertheless, despite all of this the New Zealanders clearly have the raw boat speed and the talent to dig themselves out of any tricky situation they find themselves in. We should be in no doubt that the few wrinkles we saw today will be quickly ironed out.

The opening match on the second day presented the tantalising prospect of a head-to-head between perennial rivals Dean Barker with NYYC American Magic and Jimmy Spithill on the starboard wheel for the Italians of Luna Rossa Prada Pirelli.

The Italians were super late into the start box from the right and were awarded an instant penalty, leaving Barker free to manage his time on distance perfectly for a clean on time start on port.

Luna Rossa meanwhile tacked away on to starboard to clear the penalty and looked to have a big hill to climb to get back in touch with the Americans before the finish. But one thing we have learned already with these AC75s is that even the smallest mistake will be brutally punished.

Sure enough not very long later a slow foil arm operation during a tack saw the US boat heel heavily and skid off its foils, handing the lead to a grateful Luna Rossa.

From then on we were treated to some excellent racing as Barker & Co. tried everything they knew to get back in contention. On several occasions they closed in close enough but could never find a way around the Italian crew who sailed a smooth, clean race to take a 12 second win and put another point on the board.

The second match up between American Magic and Luna Rossa was the best race of the day by far. It began with some breathtaking 40 knot match racing in the prestart as Luna Rossa managed offset the penalty they had received for entering the start box three seconds early with an aggressive windward/leeward push.

Unfortunately for them the Italians fell off the foils in the process and were left a sitting duck for Barker to scoop them from leeward to give them another penalty prior to the start. Luna Rossa was quickly back on the foils however and at the windward gate were trailing by just 21 seconds.

[By the way, my theory is that a ‘JK’ is nod to the disastrous early tack around the leeward gate manoeuvre called by Oracle Team USA navigator John Kosteki during a key race at the 34th America’s Cup in San Francisco which handed the lead to Emirates Team New Zealand.]

It took some hard cover tacking from the American Magic crew to keep Luan Rossa at bay and at the end of this cracking race just 20 seconds was the margin.

In the second match up between Emirates Team New Zealand and Ineos Team UK. A huge left hand wind shift before the start meant that neither boat could cross the line on starboard tack. When the Kiwis gybed around on to starboard they fell off their foils and were virtually stopped dead. This allowed Ainslie a clear run at an empty start line.

The Kiwis were soon back in the hunt however and on the first downwind leg we saw no less than three lead changes as Burling on starboard forced Ainslie to cross behind. When they converged again moments later it was the Brits who sneaked across ahead. Then at the final gybe on the approach to the leeward gate the Kiwis grabbed the lead to round just seconds ahead.

It was thrilling stuff that will have surely given the British crew some heart despite the New Zealanders stretching away over the rest of the race.

After two days and eight races it is American Magic who top the leader board on count-back from Emirates Team New Zealand, both with three points. Luna Rossa Prada Pirelli are third with two points, and Ineos Team UK are in fourth with zero points so far.

Two more day of racing are still to come on Friday and Saturday.