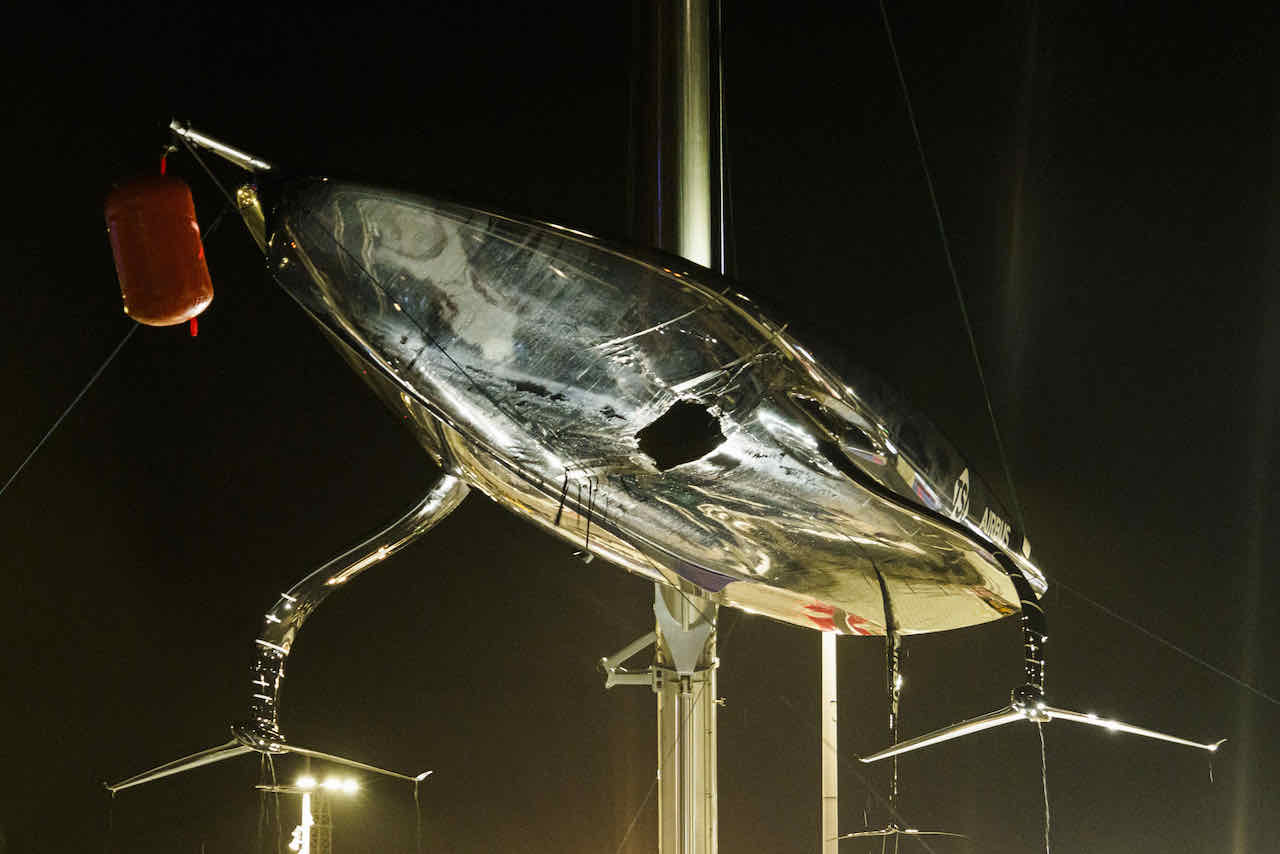 NYYC American Magic skipper and tactician Terry Hutchinson has spoken officially about the American yacht’s spectacular capsize and near sinking in Auckland during a wild and windy race in the Prada Challenger Selection Series and the team’s plans to remain in the America’s Cup.

Hutchinson’s statement comes within a few hours of the American AC75 Patriot being craned out of the water at the team’s base after being prevented from sinking on the racecourse by a collective effort involving support boats from rival teams, the coastguard and the local fire department.

“First and foremost, we are incredibly grateful and thankful that everybody is safe,” said Hutchinson, skipper and executive director of American Magic, the U.S. Challenger for the America’s Cup. “The team did an incredible job getting PATRIOT back to the dock.”

“The response from the local community here was incredible, and you can’t give enough thanks to the police, fire and local authorities for their quick response,” Hutchinson said, shortly after stepping ashore, in darkness, alongside his exhausted but relieved teammates.

“The response from the other teams was amazing, too. It was certainly heart-warming to see all the support, and obviously we needed it because this was a crisis situation. Huge thanks to Emirates Team New Zealand, to INEOS Team UK, and to Luna Rossa Prada Pirelli for coming out and helping us.”

The massive water ingress to the boat which almost caused it to sink was due, according to an official press release from the team, a hole torn into the port side of the boat by the shock of Patriot landing from a huge sky jump shortly after rounding the last windward gate of the course in the lead against Italian team Luna Rossa Prada Pirelli.

Hutchinson said the team had followed their well-practiced capsize procedures, and after determining that all were safe, had righted the yacht only to discover that she was sitting low in the water. This was markedly different to the team’s previous capsize in training aboard its first AC75 Defiant.

“We knew something was wrong straight away,” he said. “When we tipped Defiant over, the boat was pretty buoyant and sat pretty high on her side. When we righted Defiant – and as we saw with Team New Zealand a few days ago when they righted their boat – the recovery was instantaneous. As soon as you get the breeze underneath the boat, underneath the mainsail, the boat pops back up.”

“Today on PATRIOT, when I was getting out of my cockpit, we were lower in the water. The ‘pop-up’ wasn’t happening. So that was kind of the first indication. [Boat Captain] Tyson [Lamond] came through the comms saying: ‘I think there’s a hole in the boat.’

Hutchinson defended the decision made by helmsman Dean Barker to tack around the left-hand gate buoy prior to the capsize.

“Obviously it’s not exactly the day that we wanted,” he added. “We had a good race going and the boat was going really well.”

In terms of how the team will move forward, Hutchinson said the process of damage analysis, repair planning and repair execution would begin tonight and continue nonstop in an effort to get Patriot back in action.

“We have to see what the damage is on the inside of the boat, apart from the hole. Fortunately we’re here at our base now, they’re getting the rig out, and we’ll assess the damage and go forward.”

Hutchinson said that this type of incident would certainly be a major challenge to overcome, especially with only 12 days remaining until the Prada Cup semi-finals. He also said that the resilience of his team is never in doubt.

“Time and time again, American Magic has always responded to the adverse situations that we’ve been faced with, be it COVID-19 or other things we’ve come across in the last three years,” said Hutchinson.