Skip to content
You are here
Home > America's Cup > America’s Cup: American Magic back in action 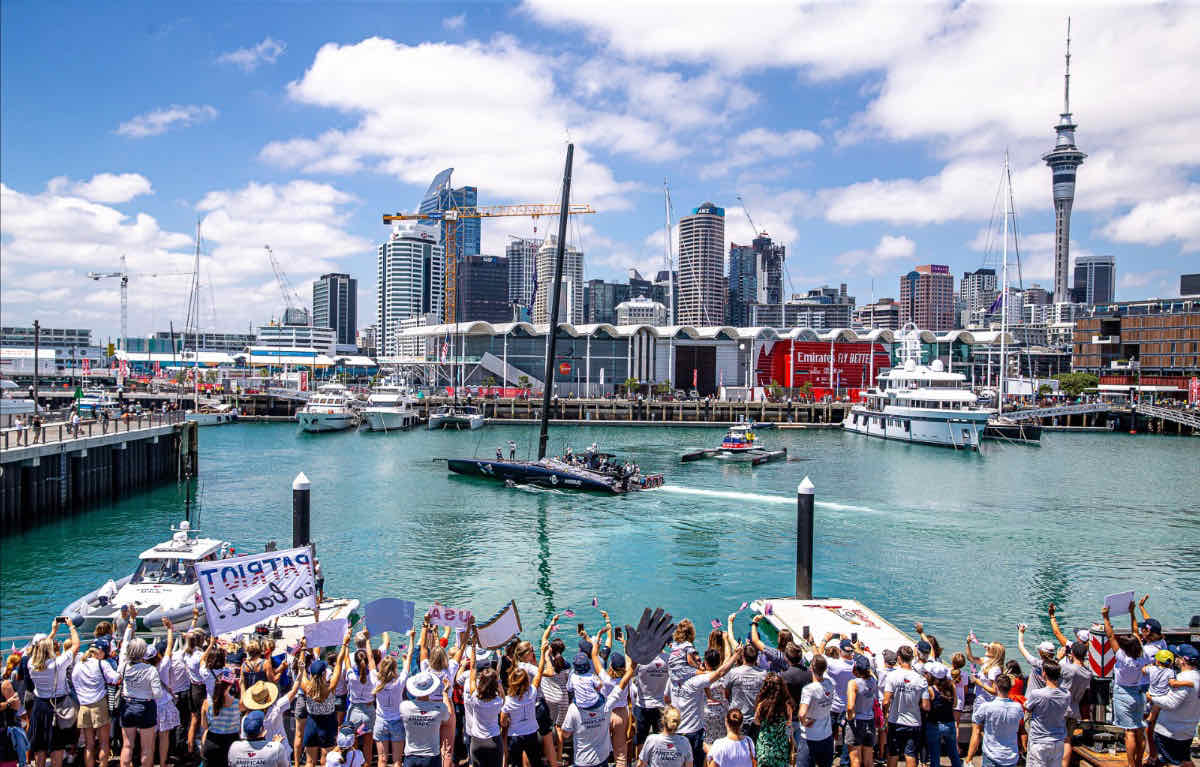 New York Yacht Club American Magic, the US Challenger for the 36th America’s Cup, has re-launched its AC75 yacht Patriot after a damaging capsize and near-sinking during a Prada Cup round robins race on January 17.

After nine days of intense boatbuilding and systems work inside the team’s base, the AC75 returned to the Waitematā Harbour roughly 48 hours before her first Prada Cup semifinals matchup against the Italian Luna Rossa Prada Pirelli Team on Friday, January 29.

“We had a pretty good setback,” said Terry Hutchinson, skipper and executive director of American Magic. “But the measure is always going to be how we respond to it. We can’t dwell on the past; the only thing that we can control is our future.”

Wednesday’s rollout, launch and dock-off was a sequence that has been completed nearly 50 times since PATRIOT’s christening. Nevertheless, this re-launch was anything but routine for the team’s families and fans as they crowded the shoreline of Auckland’s Wynyard Basin.

Nine days of feverish production work and high-stakes engineering decisions had been accompanied by thousands of messages, both digital and tangible, sent to American Magic from supporters around the world.

The crash and capsize on January 17 ripped a sizeable hole in Patriot’s port side hull, just ahead of the foil arm. Images of the damaged yacht being lifted free of the ocean in near-darkness, the hole clearly evident, had reverberated around the world in the days after the glossy blue AC75 had disappeared inside her hangar.

When PATRIOT reemerged on Wednesday, January 27, she sported a prominent message of thanks to the other teams and to the Auckland community at large, which had rendered timely and invaluable assistance during the January 17 incident. The bandage-shaped graphic, which was also directed at the team’s global group of well-wishers, was placed over the previously damaged section of the hull.

Patriot spent nearly seven hours on the water on Wednesday, and encountered very light wind early on in the session. When the anticipated stronger breeze arrived in the late afternoon, Patriot completed several laps of the inner harbor and conducted drills near Rangitoto Island. When asked if the yacht felt the same, Hutchinson’s answer was succinct. “45 knots. So yes, it did.”

Hutchinson also noted that while the boat felt good, speed is not the team’s true measure of success. “Our measure is the scorecard. We know that we have to go out and have some good races over the weekend.”

“We’ve just got to back ourselves, trust ourselves and do what we would’ve done normally,” said 8-time America’s Cup veteran Sean Clarkson, one of the team’s grinders and the reserve main trimmer.

“We’ve got a great boat, a great crew. We’ve just got to do it. We’re very fortunate, very grateful to the shore crew, the design team and the general public. They’re behind us and they got us here.”

With Emirates Team New Zealand and INEOS Team UK training for parts of the day in close proximity to American Magic, Auckland was once again treated to the arresting spectacle of multiple 75-foot hydrofoiling monohulls engaged in full-pace training.

“Coming into the harbour, I was sort pinching myself how lucky I am,” said Clarkson. “We’ve just got to grab it and win it. One step at a time. This weekend’s a big one, but it’s just one step.”