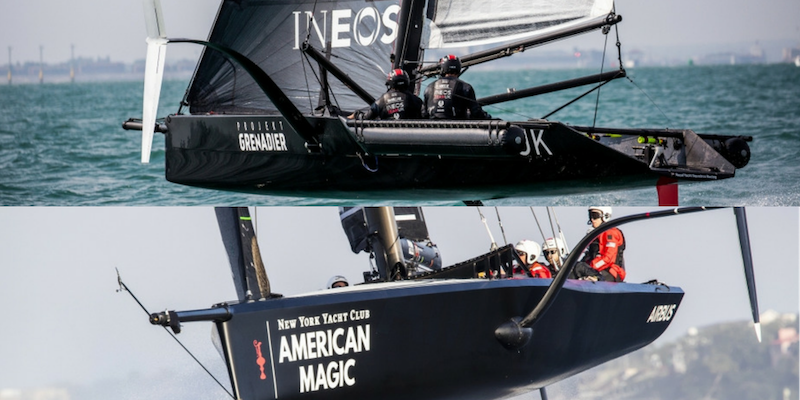 Two of the America’s Cup “super teams” – American Magic and INEOS Team UK – have reported accelerated progress in their campaigns after both teams ran winter training camps away from their home bases.

Faced with the prospect of freezing temperatures and winter storms back home in the United Kingdom, the British team, led by Sir Ben Ainslie, opted to decamp to a coastal lake at Mar Menor in Spain.

Meanwhile the American syndicate faced the prospect of even worse weather up in Newport, Rhode Island and chose Pensacola, Florida on the Gulf of Mexico for their winter getaway.

According to recent video updates released by the American and British challengers, both have been able to take advantage of ideal sailing/testing conditions during their time away from home as they race to master the art of monohull foiling using their surrogate test boats – a modified Quant 28 (codenamed T5) for the British, and a rebuilt McConaghy 38 (The Mule) for the Americans.

“We have been down here for three months now and our whole thought process when we came down here was to maximise our time with our test boat, T5,” says Jono Macbeth INEOS Team UK sailing team manager in the team’s video.

“The breeze is super-settled when it comes out of the sea breeze direction and it’s really flat water, so we have really been able to maximise our time out on the water and really make best use of the time we have had.”

Having so little down time during the winter months is a huge bonus in an America’s Cup campaign – as Rob Wilson, INEOS Team UK sailing team coach, explains:

“With these campaigns, one of the biggest issues is the amount of time you have got,” he says. “So having three months with very few missed sailing days is absolutely massive. If we have twice the sailing days, then we get twice as much done – it’s as simple as that.

Despite the near perfect sailing conditions, maximising the number of sailing days has not been easy, with – according to Ben Ainslie, INEOS Team UK’s team principal and skipper – the bulk of the workload falling on the shore team.

“It is hard work, particularly for the shore team guys,” Ainslie says.

“To keep a boat as technical as this one going for so long requires a lot of hours in the shed. And then for the rest of us there have been some long hours too – but at the same time, it is also massively rewarding, as we can see the gains that we are making and know that it is worth it.

As happy as Brits clearly are with their choice of winter training base venue then, if anything, the American Magic teams seem even more so with theirs.

Similarly to Mar Menor, Pensacola Bay is well sheltered from the open sea, resulting in flat water conditions that the American crew have been able to take full advantage of in the more than 45 days they have spent there.

In the American Magic video sailor Andrew Campbell who manages foil trim on the US boat said that Pensacola had completely exceeded their expectations of it as a training venue.

“It’s flat water, plenty of breeze, hasn’t been too cold, and the people are good here and have been treating us really well,” Campbell explained. “It’s just a nice big wide race track that we can stretch out in and get everything done that we need testing-wise – but it is challenging enough that it keeps us on our toes.”

For American Magic helmsman Dean Barker the team’s winter training camp has been a massive boost to the entire campaign – both ashore and afloat.

“Being a new class and a new concept [the filing AC75 monohull] means that pretty much every day there is something to learn,” Barker said. “We have obviously got a huge list of things to work our way through.

“It’s really valuable for the team as a whole to go through the process of getting the boat on the water every day – and then we get to do the fun part of being able to go and sail it.”

Having a larger test boat means the American team been able to give more of their sailor experience of sailing a large foiling monohull.

For American Magic bowman Nick Dana – a veteran of three Volvo Ocean Races – this is his first time foiling on a larger boat than a Moth.

“For me it’s a pretty unreal experience,” Dana says. “It’s a lot softer than what I’m used to, a lot smoother ride, and a lot faster. It’s pretty cool what you can do with 10 knots and flat water.”

From Campbell’s perspective the 38-foot Mule is a vital tool to ensure the team can continue to learn the art of large boat monohull foiling before they launch their first full-size AC75 sometime this summer.

“The 38 is our best shot and finding out what are going to be the pain points around the racetrack,” he says. “We are trying to make sure we put ourselves under pressure every day to learn the hard points of sail and the hard corners.

From the helmsman’s point of view, Barker says the dynamic of sailing a foiling monohull is very different to the catamarans used in the last two editions of the America’s Cup.
“That makes it a great challenge,” he says. “From a competitive standpoint we are really enjoying the challenge of finding out what the boat is all about – how it behaves, and all the things it does and doesn’t like to do.

“You learn the hard way at times – [a reference no doubt to the capsize shown in the US team’s video] – but it’s very rewarding when things start to come together,” Barker concludes.