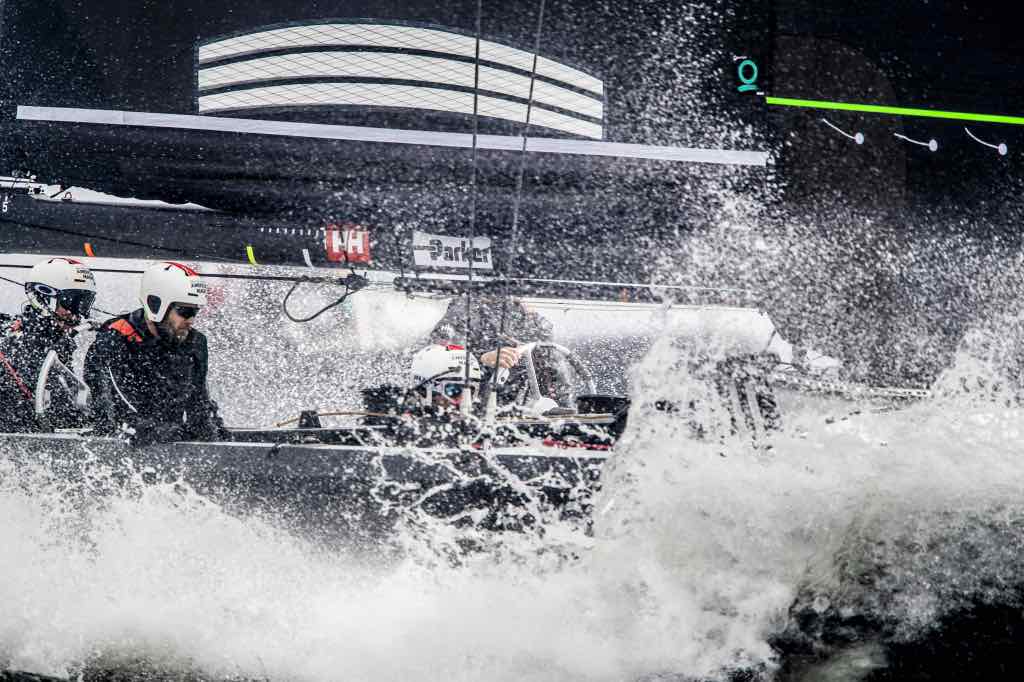 In the second of our exclusive articles examining the brains trust/afterguard line-ups for each of the four 36th America’s Cup syndicates. we shine the spotlight on US Challenger NYYC American Magic.

[You can read our first analysis piece, on Emirates Team New Zealand here.]

According to what American Magic mainsail trimmer Paul Goodison told us in an interview on a recent episode of The Yacht Racing Podcast, the speed loop aboard the American’s AC75 Defiant consists of himself, helmsman Dean Barker, tactician and skipper Terry Hutchinson, and flight controller Andrew Campbell.

“The main communication is the ‘speed loop’ between me, Dean, and Andrew – who’s trimming the foils – about how we’re making the boat go. Then from a tactical side Terry’s inputting to help us get around the race course in the best shape we can.”

Earwigging on the chat on board Defiant during the America’s Cup World Series – Auckland regatta Barker appears to do most of the talking as he maintains an almost ‘stream of consciousness’ commentary of what he is seeing/thinking/feeling from the wheel as the race develops.

It is hard to say definitively as we were only hearing snippets of the on-board audio but we were surprised to hear very little verbal input from Hutchinson – although worth noting that as well as his tactician role Hutchinson also contributes to the grinding from a fixed position on the port side of the boat, directly in front of the port helming station. (It could also be that Hutchinson’s audio was not included in the event’s live feed coverage.)

Likewise flight controller Campbell stays fixed in position on the starboard side. Both he and Hutchinson act as Barker’s eyes to leeward of the double-skin, end-plated mainsail and feed back on boat-on-boat positioning and other relevant information when required.

Goodison and Barker share the wheel during tacks and gybes with both changing sides by running/scrambling around the back of the mainsail. As Goodison revealed in the podcast interview the team is experimenting with who does what on the manoeuvres to try to avoid telegraphing their intentions to their opponent.

Based on the ACWS – Auckland racing the American afterguard appears to be well set up in terms of achieving the fine balance it undoubtedly takes to coax the best performance out of their AC75. They looked to be fast upwind and (particularly so) downwind. If we dared suggest a potential weakness in the US team’s armour it would be that on two occasions that we observed – in races against the New Zealanders and the Italians – they allowed significant leads to be ground down on the upwind legs, despite attempts for heavy cover. Perhaps it’s in these situations that Hutchinson rather than Barker needs to be taking the lead.

This 36th edition of the America’s Cup marks Barker’s sixth participation in the sailing’s oldest and most prestigious competition. After greatly impressing Russell Coutts with his fearsome match racing skills as helmsman of the B-boat in the run-up Team New Zealand’s successful defence of the Cup in 2000, Barker got the nod to steer the Kiwi boat in the final race of the five to nil drubbing of Prada Challenge.

Barker was skipper/helmsman in 2003 when Emirates Team New Zealand lost the Cup to the Coutts-led Swiss Alinghi syndicate and again in 2007 when they made it to the final once more but lost 2-5 against Alinghi.

In 2013 Barker looked set to lift the America’s Cup for the second time when the Kiwis dominated the early races of the final match against Oracle Team USA on San Francisco Bay. They ran out to a seemingly unassailable 8 – 2 lead, only to be pegged back by a rejuvenated American team who ultimately defended the Cup 9 – 8.

After an acrimonious post event spat between Barker and ETNZ boss Grant Dalton, Barker parted company the New Zealand team, but re-emerged as skipper and helmsman of the Softbank Team Japan for the 35th America’s Cup in Bermuda in 2015.

British sailor Paul Goodison made his professional name in the singlehanded Laser class in which he competed at three Olympic Games; finishing fourth in Athens 2004 before going on to win the gold medal at Beijing 2008. After winning the 2009 world championship he was heavily tipped to retain his Olympic title on home waters at the London 2012 Games, but an excruciating back injury severely handicapped his performance and forced him out of contention for a podium position.

After switching to the foiling Moth class Goodison dominated the highly technical and star-studded class for three years by winning back-to-back world titles in 2016, 2017 and 2018 – an un-matched achievement prior or since.

As well as cutting his teeth in the America’s Cup with the Swedish Artemis syndicate, Goodison has also contributed to multiple world championship wins in the Melges 20 and 32 classes. In 2017, crewed by Germany’s Frithjof Kleen, he won the Star Sailors League Final in the Bahamas.

Aside from innate sailing talent and his unrivalled foiling expertise, Goodison cuts a calm and assured figure in the American Magic line-up having apparently gelled perfectly with the differing personalities of Barker, Hutchinson and Campbell.

The America’s Cup is in Andrew Campbell’s blood. His dad, Bill, was part of three America’s Cup campaigns: the challenger Courageous in 1983, the America³ crew that won the 28th edition in 1992 against the Italian syndicate Il Moro di Venezia, and the Nippon Challenge in 1995.

After a disappointing showing in the Laser Class at the Beijing 2008 Olympic Games, in 2014 was recruited by Oracle Team USA for the team’s attempted defence of the Cup in Bermuda.

Terry Hutchinson’s raw talent as a sailor is indisputable – his 12 world titles are testament enough to that – but it is his razor focus and indefatigable work ethic that sets him apart from his peers.

No real surprise then that Hutchinson was chosen to lead the New York Yacht Club’s return to the America’s Cup after a long hiatus from the competition. Aside from his role as executive director of the US syndicate, aboard the team’s AC75 Defiant Hutchinson provides critical tactical input from his vantage point at the aft port grinding station.

Terry Hutchinson has been our guest on The Yacht Racing Podcast on two occasions: in January 2019 and in May 2020. Click the links for here what he had to say.