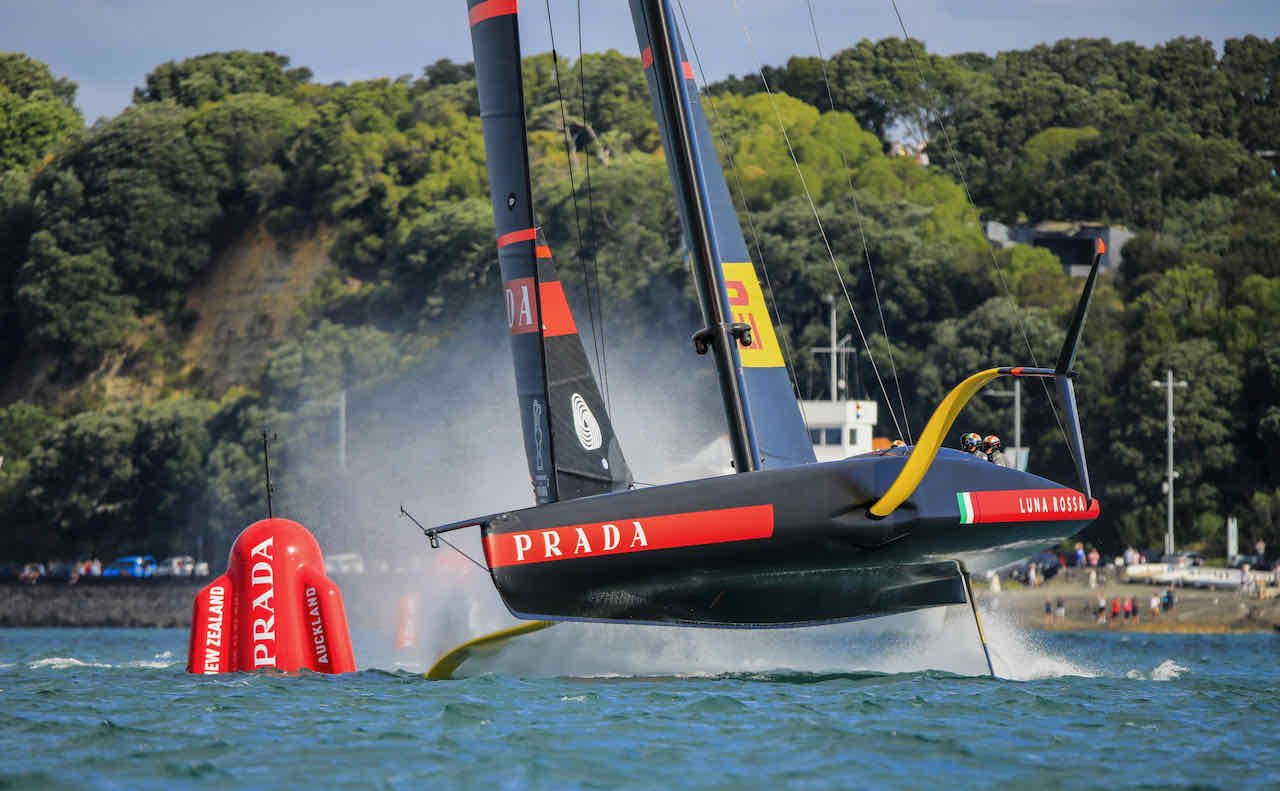 In the fourth of our exclusive articles analysing the afterguards of the four teams competing in the 36th America’s Cup we take a closer look at the somewhat unusual twin helmsman set up adopted by the Italian Luna Rossa Prada Pirelli Team.

Luna Rossa committed early to a fully split crew set up with a dedicated helmsman for either side of the boat. Jimmy Spithill steers on starboard tack and Francesco Bruni on port. We first heard about the team’s plans to split the crew like towards the end of 2019 when the team was training in Cagliari, Sardinia aboard its first generation AC75.

Back then it seemed like a radical move. But as we got to see how each of the other AC75 designs were coming out of the shed with the crews separated into trenches down either side and with mainsails end plated down to the deck, the concept of splitting the crew into two squads started to make sense.

The principal benefit was expected to be smoother, faster tacks and gybes as there would be no down time, no performance dip, as the helmsman left the wheel to swap to the other side.

Of course the success of such a setup depended hugely on having helmsmen of equal calibre and talent on either wheel. No problem there for Luna Rossa – Spithill may have the bigger reputation and media presence, but Bruni is also a huge talent with more than enough skill and smarts to earn his spot on the port hand wheel.

We saw the Italian’s double-handed setup in action for the first time in a racing situation during the America’s Cup World Series – Auckland regatta when the Italian crew acquitted themselves pretty well.

There were some hiccups in the pre-start where Luna Rossa crashed off their foils on more than one occasion – but to be fair they were not the only team experiencing teething problems in the first official match ups of the 36th America’s Cup. Overall the Italian crew’s manoeuvres looked smooth and slick and the handover between Spithill and Bruni seemed – if not polished – at least crisp.

Most importantly, the communication back and forwards between the two helmsman during racing appeared to be working pretty well. Effectively the way it works is that whoever is not helming assumes the role of tactician for his opposite number as well as becoming his eyes and ears to leeward for close crosses and mark roundings.

The Italians have gone for a highly cooperative approach that relies 100 per cent on the trust and goodwill between the two helmsmen. In the ACWS – Auckland regatta the on-board comms suggested that all was going well in that department.

Spithill in particular seemed extremely proactive in feeding information to Bruni in a supportive and positive tone. Bruni also appeared to be happy with the setup and in fact the pair at times seemed to really enjoy talking each other around the racecourse.

Things also appeared to be working well at the back of the Luna Rossa boat for the large majority of the Prada Cup Challenger Selection Series round robin racing. Even though they lost twice to the British during the first Prada Cup weekend Spithill and Bruni retained their composure at the back of the boat.

But when the time came to face the British to race for a place in the Prada Cup final we felt we could see the first signs of cracks opening up in the relationship between the two Luna Rossa helmsmen.

It’s worth noting that in that race also saw the Italian’s mainsail trimmer/controller – the highly talented Pietro Sibello – playing a more audible role in the tactical communication process. For the first time that we had noticed Sibello was changing sides during tack and gybes – presumably to put him in a better physical location to provide tactical input.

The race was action packed with lead changes and drama a-plenty, but from a Luna Rossa point of view the key moments were two fluffed tacks that contributed largely to the Italian crew coming out on the losing end of the knife edge race.

Significantly both cases the tacks were poor because of apparent breakdowns in communication between Spithill and Bruni who seemed out of sorts with each other. Their tone appeared different, less tolerant and both at various times talked over one another on the radio. That approach doesn’t work in any relationship and it certainly isn’t what you want to hear on board a 75-foot monohull teetering on foils as it tears around the racecourse at 30 to 40 knots.

Whether there has been a fall out between Spithill and Bruni is impossible to say from outside the team. But were there were clues in the body language of the duo at the pre-race press conference the previous day? You could certainly make a case for that when you see both of them slightly slumped in their chairs with their bodies oriented slightly way from each other.

Tiff or no tiff the Luna Rossa team will need Spithill and Bruni to be fully engaged this weekend when they take on the US NYYC American Magic syndicate for the remaining Prada Cup final slot. Our feeling is that when they are on song the Spithill/Bruni partnership is close to world class – and world class is what it is going to take to find a way past the fully fired up Americans.

Role: Co-helmsman
Notable achievements:
America’s Cup wins:
One in 2010 at the 33rd edition in Valencia with BMW Oracle
One in 2013 at the 34th edition in San Francisco with Oracle Team USA
World championship titles: Match Racing (1); RC44 (1)
Team profile: https://www.lunarossachallenge.com/en/team/254_Jimmy-Spithill