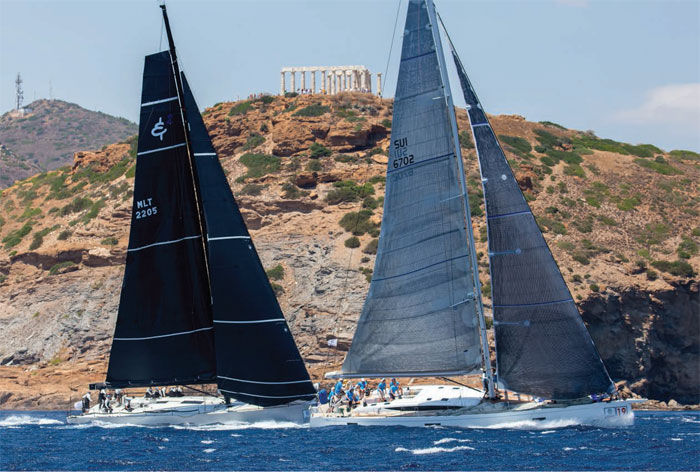 Offshore racers are always looking for new challenges to test their boat and themselves, this is a fundamental driving force for our sport. While this challenge is inherent to the game due to the inevitable changes in wind and sea even on the same race course sailed at the same time of year, sometimes new venues will be attractive for teams seeking to enhance this challenge and their enjoyment of the sport to further hone their offshore skills. The Aegean 600 offers this challenge.

Building on the success of the second edition of the race in 2022, the third edition coming in July 2023 (7-15) will offer both returning and new teams an opportunity to experience what has been called “the perfect 600-mile race”. This is a bold claim of course, but one borne out from the race’s format, its setting and the exuberant feedback from those who participated in 2022.

The Aegean 600 course was designed by experienced offshore racers who know that 600 miles is the perfect length to test all the skills a team needs to demonstrate their abilities in offshore sailing: preparation, safety, seamanship, navigation, proper sail selection and trim, and the efficient pacing of crew work in what can be sustained and demanding weather conditions. The organisers from the Hellenic Offshore Racing Club (HORC) have a decades-long heritage in racing yearly in the Aegean Sea. They know the weather, the seas and the islands very well.

Entry is open to monohulls and multihulls, with scores calculated using ratings from IRC, ORC or both for monohulls, and MOCRA for multihulls. Double-handed entries are welcomed and are eligible for the overall Aegean 600 handicap trophy. Starting and ending the race in the same place is considerably less logistic hassle than a point-to-point race. This helps compress the timelines for teams to participate and still have some of their season left for more sailing.

The shoreside venue is centralised at Olympic Marine in Lavrion, a world class marina with large docks, deep water to accommodate all boat sizes and full services of a large boatyard for maintenance and repairs of sails, standing and running rigging, engine, plumbing, electronics, woodworking, composite repairs and so on. There are restaurants on site, shops for provisioning, a logistics hub for shipping and transport – and Athens international airport is only a short drive away.

The racecourse is a scenic tour of the legendary islands of the southern Aegean Sea, with a start and finish is just a few miles from Olympic Marine and positioned off the cliffs of Cape Sounion where the ancient temple of Poseidon – built in the fifth century BC to honour the ancient Greeks’ God of the Sea – overlooks sailors and boats as it has for 2,500 years. There is no more symbolic setting for the beginning and end of a yacht race than this iconic feature.

After the start the fleet heads southeast passing the island of Milos to port, a gate to sail through the stunning Caldera of Santorini, then east and northeast towards Kassos, Karpathos and Rhodos islands left to port. At the town of Rhodes at the east end of the island – the site of the Colossus of Rhodes, one of the seven ancient wonders of the ancient world – the course turns west towards Kandelioussa left to starboard, then northeast to Kos left to port, then northwest again to Kalolimnos left to starboard, with Farmakonissi, Agathonissi and Patmos islands left to port. The course then heads back to Attica with a gate at Mykonos and the Dilos strait, then a final run to the finish at Cape Sounion leaving Kea island to port.

Not only does this course challenge navigators for routing around and even through these islands, but the near-constant northerly Meltemi provides the 15-25 knot power needed to complete this course in three to five days of exciting sailing. In and around the islands the Meltemi can fade to drifting conditions or become very exciting, building up to 40 knots in some areas. Thus this racecourse tests all teams to persevere in a wide variety of offshore conditions.

Another important feature is the tracking during the race using the YB system, and daily race analyses offered by offshore race commentator (and Seahorse correspondent) Dobbs Davis to give the audience of followers an in-depth view of how the teams are progressing on the course. For 2023 there will be other media team members positioned around the course in not only the caldera gate at Santorini but additional locations such as Rhodes and Mykonos to capture more images of the racers in action. These are used in both daily stories and shows but also at the final awards ceremony that concludes the event.

Another new features for 2023 is a renovation project to better centralise and expand the berthing for race participants at Olympic Marine, where the goal is to bring a race village feel to the venue. This is important for the social bonding among all offshore sailors, regardless of where they are from, and a sense of teamwork to help each other prepare for this race.

Organisers help with this as well by offering a pre-race safety seminar and certification to comply with World Sailing safety standards, a criterion that HORC takes seriously for all those who participate in the race. Another positive aspect of this racecourse, in fact, is that if breakdowns do occur teams are never far from a nearby island to retreat to if needed. Some teams took advantage of this in 2022 to make repairs and rejoin the race, while others opted to stay in their chosen stop anchorages to enjoy the famous Greek island hospitality.

On the topic of hospitality there’s no need to retire from the race to enjoy it, the organisers offer plenty of revelry upon arrival at Olympic Marine. For 2023 there are plans to expand the hospitality for all participants with multiple parties and social events in addition to the impressive opening and closing ceremonies held both at the marina and in surrounding locations that highlight the deep history of the region of Attica. Trips are also planned to important local tourism sites such as the Temple of Poseidon, the gold and silver mines of Lavrion and other attractions.

These features provided an array of positive feedback among both newcomers and returning competitors from the race’s first edition in 2021. Teams from 12 nations competed in 2022, proving the growing appeal of the race among sailors from around the world.

‘I am really happy we did this race,’ says Gregor Stimpfl, owner/skipper of the Scuderia 65 Hagar V (ITA) and a returning Aegean 600 competitor. ‘This is the second time we have competed. We found the organisation to be excellent and supportive, and the race a perfect mix of fun and challenge. It is place this among the best of the 600-mile races and recommend it to everyone.’

‘I recommend this race to all who want sunny skies, clear nights, island scenery and a healthy dose of seamanship,’ says Kent King, skipper of the Holland 68 Four Seasons IV (AUS) who competed for the first time in 2022. Team member Phil West says: ‘I’ve done 40 Hobart races and while this is a very different race, it was every bit the same level of challenge.’

‘Our respect and love go to the organisers for their work,’ said Ioannis Barkas, skipper of the Orma 60 trimaran Akron Aoton (GRE). ‘They were always there for every boat and every crew member, giving solutions that were fast and accurate. The organisation of the event is at a pro level and it’s an honour for us to participate.’

In recognition of the outstanding efforts made by HORC Commodore Ioannis Maragkoudakis and his team at organising this newest major race on the international offshore racing calendar, Maragkoudakis was nominated for Seahorse Sailor of the Month in October 2022.

For 2023 the event is included in the schedule of the International Maxi Association’s Mediterranean Maxi Offshore Challenge. After observing the event last year, IMA’s Rob Weiland says: ‘No doubt this 600-mile offshore race shall be on the bucket list of every owner and crew in offshore racing. One look at the course map and you are hooked. It’s not yet a classic like the Fastnet Race or the Middle Sea Race – but it will be. All components are in place: the Greek hospitality is legendary, a great marina, blue water, good breeze most of the time, sun and stunning scenery, and all that just a 30-minute drive from Athens airport.’

It could be said that with all these successful elements of the Aegean 600, Poseidon himself smiles on this race.