Skip to content
You are here
Home > Advertorial > Advertorial: Sleek and purposeful are the norm aboard Sea Eagle II 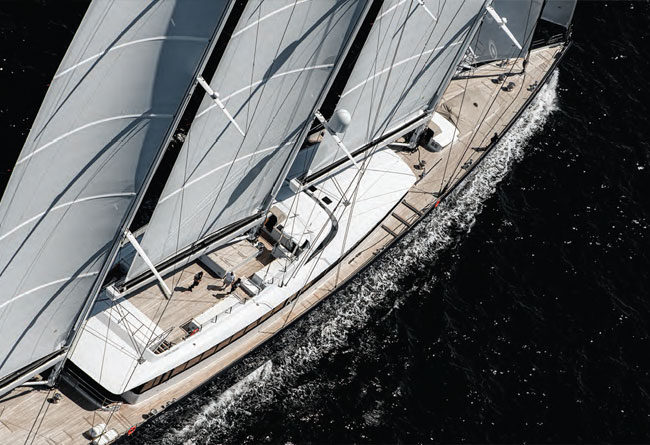 Not so long ago the idea of employing composite rigging on an 81-metre world girdling schooner would have earned you a medical referral. Today it’s the obvious choice, even for Royal Huisman’s biggest sailing vessel.

Solid carbon rigging for an 81-metre three-masted Panamax schooner? No problem at all. When Royal Huisman built the world’s largest aluminium-hulled sailing yacht – the Dykstra-designed Sea Eagle II, delivered in July – the standing rigging was custom made by Carbo-Link.

Sea Eagle II is one of the 10 largest sailing yachts in the world and the largest vessel Huisman has ever built. The 90-metre Athena is a bit longer if you count her bowsprit, but in terms of gross tonnage – which for superyachts is the measurement that really counts – the 1,150GT Sea Eagle II is in a different league. Before the build could start, Huisman first had to extend its biggest shed.

The project began back in 2016 when the Taiwanese businessman and philanthropist Dr Samuel Yin commissioned Huisman to build his ideal world cruising yacht. A lifelong sailor with a lot of offshore voyaging experience, Dr Yin already had a Royal Huisman superyacht – the 43-metre cruiser-racer Sea Eagle – when he decided to build something truly exceptional.

The design brief for Sea Eagle II contained plenty of pragmatism amongst the superlatives. The owner’s priorities were eminently sensible: low maintenance, functionality and safety. The exterior design and styling – a collaboration between Dykstra and Mark Whiteley – is sleek and purposeful, yet sensibly understated, resolutely modern but destined to become a classic.

It’s a practical configuration for a vessel of this size, giving a 60-metre air draught that allows her to slip beneath the Bridge Of The Americas at the western end of the Panama Canal and circumnavigate the world in warm weather while similar-sized sloop-rigged yachts are obliged to lower their masts or make an 8,000-mile detour.

The choice of a schooner rig might be informed by practical considerations but it still produces enough power to achieve more than 20kts on passage.

The carbon masts, roller-furling booms and deck hardware, including 34 winches with working loads of up to 18 tons, were built by Royal Huisman’s sister company Rondal and designed as a fully integrated sailing system with the emphasis on simple, effective sail control for the crew of 13. A stand-out innovation of Sea Eagle II’s rig is a hydraulic crow’s nest on the mainmast, which guests can ascend to enjoy an amazing view.

Doyle supplied the sails and worked closely with Rondal, Dykstra and others to ensure optimum fluid and structural interaction between all three masts across an extensive variety of sailing load cases – a complex task given this yacht’s ability to set any combination of up to eight different sails, fully hoisted or partially furled, on her three masts at any time.

Carbo-Link supplied a bespoke CL Solid: Round rigging package including two forestays, three sets of continuous lateral rigging and two triatics. The backstays were supplied in Kevlar at the client’s request.

‘The rigging for Sea Eagle II’s foremast is among the largest continuous lateral yacht rigging solutions we have built with cable diameters up to 55mm,’ says James Wilkinson, business development manager at Carbo-Link.

‘But that’s still a relatively small cable cross-section given the stiffness requirements.’ Indeed, the design engineers had specified stiffness of up to 435MN and working loads of up to 125 tons.

An important part of continuous rigging at this size is the vertical/diagonal intersection. Titanium spreader bends are fully integrated into the cables at pre-determined locations to interface with Rondal’s specially designed spreaders, allowing efficient load transfer into the rig and visa versa.

The rigging is fully solid in this area, with no transition of intermediate fibres or bonded joints and fully engineered to support the joint when rigging is bent or unloaded in leeward sailing cases.

Even these massively strong cables are effectively just a midrange product for Carbo-Link, which builds enormous solid carbon cables for civil and industrial engineering applications.

‘Liebherr has been using our CL Solid crane pendants since 2003 for many of their cranes,’ Wilkinson says. ‘The largest of these reaches a maximum hoist height of 220 metres with a maximum load capacity of 350 tons.’

The cable terminations and raw carbon fibres are different but in structural terms the key difference between these crane pendants and CL Solid yacht rigging is that the former are seriesmanufactured in standard sizes while the latter are designed, engineered and manufactured on a bespoke basis.

‘The same technology has been developed and tested for stadium roof applications,’ Wilkinson explains. ‘We have a number of those projects in the pipeline with working loads of up to 500 tons, using a thimble-less spherical bearing termination. The cable diameters are in the 100mm range.’

If a yacht three times the size of Sea Eagle II is ever built, the technology to rig it already exists.

Despite the size of these rigs, the deck interfaces take advantage of Carbo-Link’s integrated cable terminations. The cables feature shimmed pin terminations which interface with custom shimmed titanium toggles.

‘This shimming allows a useful adjustment range if and when required within a neat, simple package,’ Wilkinson says, ‘though the mast configurations were modelled accurately resulting in a relatively fixed, reliable rake position and subsequent cable lengths.

‘Our fully integrated cable fittings result in a lightweight and neat aesthetic interface to the toggle. There are no threaded fittings in the chainplate configuration, so maintenance and long-term service is minimal and cost effective for such large components. Threaded turnbuckles may well have ended up larger, heavier and would have needed more thorough service and maintenance as a result of the large loads applied to the threaded parts.’

Like all CL Solid cables, Sea Eagle II’s rigging package was designed, engineered and manufactured at Carbo-Link’s hi-tech factory near Zurich in Switzerland. It’s GLcertified, of course, but far exceeds that standard, built to a higher specification in an AS9100D aerospace-certified facility. The CL Solid rigging was fully cured and finished at the factory and delivered by regular freight train to Amsterdam.

‘We have a train loading bay right next to our factory that allows any composite solutions up to around 80 metres long to be efficiently loaded,’ Wilkinson explains. ‘We manage all of the logistics in collaboration with Switzerland’s famously efficient train operator, SBB, so we can deliver our rigging almost anywhere in Europe and even further afield through a well-developed, organised and efficient transport network.’

The final leg of the delivery, from a rail terminal in Amsterdam to the Huisfit shipyard in Zaandam, was a short hop on a barge.

‘It’s a simple and efficient delivery for a project of this scale, saving both time and money in on-site logistics,’ Wilkinson says. ‘Carbo-Link technicians were present for the unloading and loading of the train and barge, and also for the dressing and stepping procedures. One side of the lateral rigging was dressed to the 60-metre masts in just 45 minutes.’

The last stage of commissioning Sea Eagle II’s rigging was the simple, routine task of vibration damping. Vibration can affect all types of rigging, or any cable or rope under tension and exposed to airflow, due to a phenomenon known as vortex shedding. It doesn’t affect all yachts and cannot be pre-empted at the design stage due to the unpredictable behaviour and interplay between a vast array of different factors when the mast and rigging is assembled in its real environment.

‘The variables include cable tension, cross-section, shape, length, deck and mast interface configuration, deck construction material and stiffness, mast stiffness and dynamic behaviour, wind speed, angle, density, varying weather conditions, and more,’ Wilkinson says. ’It is impossible to guarantee that any type of rigging will not vibrate. All dynamic loads and inservice system configurations must be taken into account to determine the likelihood of vibration and the necessary solution if required.’

Carbo-Link has invested years of R&D in vibration mitigation and has invented a straightforward solution that has proven to be effective, requires no special skills to implement and can be done by a yacht’s crew in a couple of hours. CL Dampers are discreet, lightweight devices with precision-engineered internal chambers, which simply clamp around a solid carbon cable and prevent it from vibrating. A crewman is hoisted aloft to identify which cable is driving the vibration in the rig, simply by grasping them in sequence until it stops. A CL Damper is then clamped to that cable, about a metre from the mast interface, and slid up or down until its damping effect is complete.

‘Some yachts endure vibration unnecessarily, a quick phone call to us and a simple task for the crew could solve it immediately,’ Wilkinson says. ‘CL Dampers will work on any type of carbon rigging – we’ve even made some for one of the teams in the current America’s Cup.’