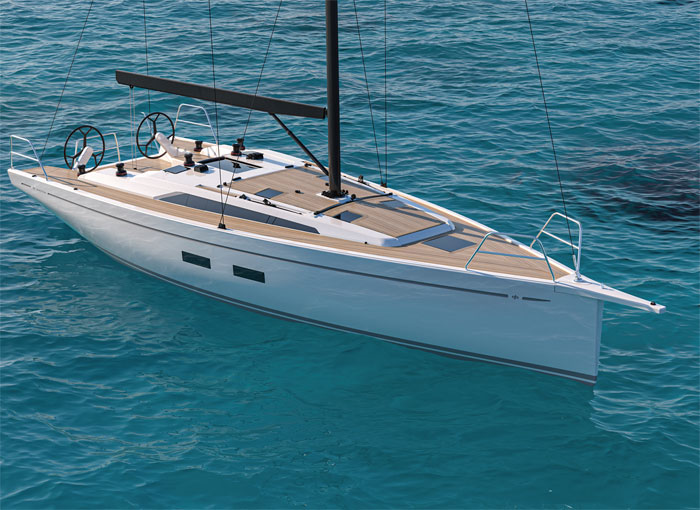 If it looks right, it probably is right. Generations of sailors, boatbuilders and yacht designers used to swear by that simple rule of thumb. Even today, when the science of CFD modelling has completely replaced the instinct of the designer’s eye, the shape that looks best is still sometimes the fastest.

Witness the graceful, swooping curves in the topsides and aft quarters of Matteo Polli’s Grand Soleil 40. Two of the great 20th century designers, Kim Holman and Olin Stephens, would no doubt approve.

The naval architecture of Polli’s contemporary racer-cruisers, like the GS 40 and GS 44, has very little in common with the hull shapes drawn 60 years ago by Holman and Stephens, but they share the same very strong focus – unlike many other sailing yachts back then and also right now – on maintaining the hull’s balance of volume through a wide range of heel angles. That’s why they handle so well and often win races despite being less aggressively endowed with sail area and form stability than some of their rivals. Less rudder action means less drag as well as a more controllable and enjoyable boat to steer.

Polli extends that principle significantly further than the shape of the hull in his designs for Grand Soleil. The sailplan is also precisely balanced, with the mast moved aft to give the foretriangle more area relative to the mainsail. The results speak for themselves. The GS 44 scored a convincing win at last year’s ORC World Championships and it’s a strong contender again this year. The GS 40, which makes its début at the Cannes Yachting Festival in September, is an evolution of the concepts studied for the GS 44 and thus, once again, quite likely a force to be reckoned with in racing.

The waterline beam is notably slender and the bow profile remains very fine to maintain good performance in light airs and ensure a smooth passage through the waves. Unlike a more typical cruiserracer or performance cruiser with highvolume aft quarters, this boat shouldn’t have any tendency to bury its nose when powered up on a reach, so it doesn’t need the extra buoyancy of a hydrodynamically inefficient blunt entry. As with the GS 44, the GS 40’s single rudder is located well forward – the balanced hull form doesn’t need the rudder blade to be as far aft as possible for directional stability – which helps to make the boat nimble in tacks and responsive on the helm.

Two versions of the GS 40 are offered: Performance and Race. The former is a cruiser-racer with a self-tacking jib as standard on a track recessed into the coachroof and the mainsheet led to a fixed point on the cockpit sole. The deck plan includes four winches: two on the coachroof and two on the sidedecks within easy reach of the twin helms.

The Race version, while still a dualpurpose boat, is emphatically more of a racer-cruiser with a deck plan designed for a full crew to work the boat with maximum efficiency. An extra pair of winches are mounted on the coamings and the bowsprit is extended by 70cm. The backstay tensioner is hydraulic and a mainsheet traveller runs across the full width of the cockpit, recessed into the sole. The self-tacking jib is replaced by a 100 per cent genoa on transverse tracks, giving an extra 11m2 of upwind sail area.

Both versions have an electric stern platform. It’s deliberately small and light so its impact on pitching and thus performance is greatly reduced.

Three different keel options are available, all with a cast iron fin and lead torpedo bulb. The standard keel is optimised for IRC racing with a draught of 2.4m; there’s also a 2.1m draught version for ORC and a 1.85m shoaldraught option which will significantly enhance the boat’s versatility in some of the most popular sailing areas.

Perhaps the stand-out aspect of the GS 40, though, is the inventive design work on deck and down below by Massimo Gino, a founding partner of the highly regarded Nauta Design studio and its head of design production. ‘On deck, the position of the mast further aft and the internal headroom requirements allowed us to create a nice sunbed area on the forward part of the coachroof,’ he says.

‘The main companionway is still positioned quite far forward even though the mast is further aft, thus giving a great cockpit size that can be appreciated both when cruising and racing. All functions on the coachroof – winches, clutches, sprayhood and hatches – are placed very carefully, using every millimetre available.’

Some of Gino’s most innovative work on the GS 40 might pass unnoticed by cruising sailors, but to an experienced racer it should be immediately obvious. ‘It’s not often that you get a three-cabin, two-heads interior layout with a properly accessorised galley inside a boat with such light displacement and such performance-oriented hull shapes and volumes,’ he explains. ‘And in the master cabin, the queen size owner’s bed is placed with its headboard forward, which is another feature you don’t often find in a race-focused hull.’

The GS 40’s saloon layout is also a bit different, with an asymmetry between the dinette and galley that creates a seating surface comparable to what one would expect to find in a larger yacht. ‘The galley is positioned longitudinally with an L-shape worktop that allows plenty of space for crew circulation, even when somebody is cooking,’ Gino says. This arrangement works well when the yacht is anchored, with a wide-open space separating the cooking and lounge areas of the saloon. Under sail, it allows people to move about without needing to squeeze past each other.

In racing mode the GS 40’s interior layout gives the crew more elbow room and creates a clear, straight-line pathway that is nine metres long, stretching from the aft bulkhead of the port-side aft cabin to the forward bulkhead of the forecabin. Race crews will find this useful for stowing expensive moulded membrane sails that don’t like to be folded, and also for re-packing spinnakers in the middle of a race.

Moving the mast aft also allowed the design team to give the master cabin the option of an en suite heads on the starboard side. However, in the boat’s standard fit-out this is envisaged as a technical area and stowage space for racing kit rather than a private bathroom. ‘That space is a magic big storage area for sails, oilskins and all wet equipment that you may need to store,’ Gino says. ‘If the owner is more racing oriented he saves the weight of a toilet and uses that space as a great additional sail locker.’

With a boat like this, success is primarily proven in its first full year of racing results. We await the outcome of the 2023 regatta season with interest.

The design brief for the Grand Soleil 40 set the bar even higher than the 44. Fitting three comfortable cabins and two heads in a 40-footer that should be able to win races under different rating systems is a rather tough call. Starting from the experience accumulated on the 44 and considering the effects of a smaller size, improvement has been found in different areas. We are talking about refinements in hull volume distribution, improved form stability, slightly longer bow and stern overhangs and some tweaks to the appendages. Definitely not revolution of a concept but more about evolution.

In the design phase there was no specific focus on offshore passage racing or inshore windward-leeward racing. The idea was to balance the performance profile on the full range of conditions without giving more importance to one single situation. However, the owner can adapt his boat configuration quite a lot by selecting from various options of appendages, sailplans and features that in conjunction will work better for inshore or offshore racing. The boat is also equipped to deal with different sail inventories, asymmetric or symmetrical spinnakers, masthead or fractional code zero, conventional jibs or self-tacking jibs, staysails and so on.

The effect on performance of adding heavy equipment and payload is particularly critical on smaller yachts like the GS40. To minimise the negative effects, it has been paramount to pay attention to the location of heavy optional items, trying to avoid positioning them on the boat’s extremities. In this way, pitching motions are reduced but also unwanted bow down or stern down trim are minimised across the client selection possibilities. Designing the hull lines, not only the racing sailing trim condition has been considered but also the full load displacement condition making sure that all the shape parameters remain between acceptable values across the whole displacement range.

The optimal heel angle will be around 20-22° and this allows a perfect balance between righting moment and aero-hydro efficiency. Beyond that, more power can be achieved and thus more drive force but the compromise on drag would be too high. On a cruise, the optimal heel angle (considering comfort) would be slightly less, about 16-18°. Enough to sail up to 17kts without a reef on the main.

Good performance in light airs is achieved by a combination of many parameters – rocker, waterline beam, stern profile and a number of others – but the most important are the low wetted surface vs displacement, the relatively low prismatic coefficient together with absence of transom immersion. Also the large foretriangle helps quite a lot in light airs.

Pitching motion in waves is a function of not only the hull underwater shape, but most importantly the overall volume distribution, so also including the topsides. The perfect balance between bow and stern volumes allows a comfortable and also effective ride. On the GS40 as on the 44 the bow entries remain quite narrow but the forecabin volume is outstanding for this segment and the stern exits match perfectly, forming an equilibrium that ensures both comfort and performance.

As always there are compromises so a perfect shape in head seas cannot be a perfect shape when sailing in following seas, and the smaller the size of the boat the more critical this aspect is. Balance is required also in this respect. The GS40 is improved in this direction too; in fact the vertical distribution of the volume in the front part of the hull is steeper than on the 44 and this will prevent burying the bow in reaching conditions.

On the GS 40, the mast is about 4-5% further back in terms of LOA compared to a typical cruiser-racer. This percentage is even bigger if we compare to older designs. This allows larger jib area which is more efficient and has lower centre of effort. If we compare to a traditional sailplan with the same overall sail area, this configuration is faster at a smaller heel angle. It is also more reactive in accelerating after tacks and in choppy seas.

The large foretriangle of the GS40 is even more important when the boat has a self-tacking jib, especially if it’s on an under-deck furler which further reduces the J dimension. With the mast in a conventional position the cruising jib would be very small and surely underpowered relative to the typical full load displacement when starting a cruise.

The performance differential between the Performance and Race versions will be noticeable. The Race version has an almost 1m taller mast, 12% more upwind sail area, 14% more downwind sail area. Its appendages are lighter and the deck layout is more efficient. The Race version’s longer bowsprit allows more spinnaker area and also more separation from the mainsail so the performances gain will be surely remarkable if you go for maximum sail area I would recommend it for racing purposes. When cruising, the standard bowsprit will allow more than enough kite area and downwind performance.