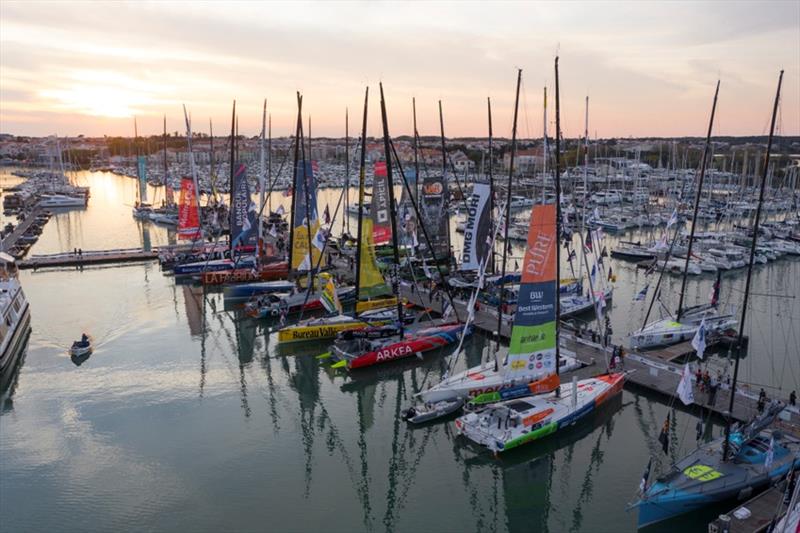 When the ninth Vendee Globe solo non-stop race around the world starts from Les Sables d’Olonne on the French Atlantic coast on Sunday at 1302hrs French time, the usual, huge partisan local crowds will be absent.

The global pandemic has robbed this year’s record entry of 33 skippers of the usual 350,000 visitors who, every four years, flood into the smart seaside resort to bid a noisy farewell to the round the world heroes, with memorable farewell messages such as 2016’s ‘All you need is globe’. The strict national lockdown means the skippers’ Sunday morning departures down the famous Les Sables d’Olonne channel into the open Atlantic ocean will be in relative silence.

The massive online, digital audience will be presented to the departing skippers only by personal messages flashed up on giant screens.

But with a whole host of records expected from solo ocean racing’s pinnacle event, a huge global following will certainly hang on every minute of this edition, following the race on the widest range of multimedia platforms, entranced by this most engaging edition yet.

During these difficult times, running the race at all is in itself a triumph over adversity. The extraordinary human adventures the race always delivers this time will more than ever light up the lives of its millions of followers.

There is no outstanding favourite to win. Eight new build, latest generation foiling IMOCA 60 footers have been launched over the last two years representing four different design studios. They reflect a wider diversity of cutting edge design ideas than ever before from a bigger range of designers. 2012’s winner Francois Gabart says, “There is a 95 per cent chance the winner will be one of these.”

Hydrofoils which ‘fly’ the 7.5 tonne yachts have grown more than twice the size of the ‘chicken wing’ foils which first appeared on the 2016-17 race. Consequently top speeds are up to 35 knots and daily 24 hour averages are expected to top 600 nautical miles. Estimates from the top skippers competing suggest 2016’s record of 74 days 3 hours 35 minutes should be lowered below 70 days.

Four sailors stand out having built up the sought after combination of speed and reliability, gained through thousands of training and racing miles. As soon as he had finished third on the last race Jérémie Beyou launched a programme aimed at winning in 2020-21. The VPLP designed Charal was first of the 2020 generation boats.

Already in the water in August 2018, the three times winner of La Solitaire du Figaro, 44 year old Beyou won the preliminary Vendee Arctique race in July, led the Transat Jacques Vabre race before being snared in the Doldrums and finishing third. His boat has done the comprehensive miles to maximise reliability and optimise for high average speeds.

Hotly fancied British challenger Alex Thomson came off second best to winner Armel Le Cléac’h in 2017. Thomson has put his faith in a radical VPLP designed HUGO BOSS designed purely to win the Vendee Globe. The 46 year old from Gosport has only started one race since the boat was launched in August last year, the Transat Jacques Vabre which he was forced to abandon after damaging, and ultimately cutting away the keel.

But the British skipper’s programme is enriched by many innovations and singular technical choices that many insiders consider should give him a winning edge, if the boat proves reliable enough and the skipper lucky enough to finish the race in good condition.

Among the key technical advances Thomson races the boat entirely from inside using a panorama of screens linked to an array of exterior cameras. His team have developed their own autopilot artificial intelligence system and they have an exclusive sail development programme.

But Thomson worries that the new boats – particularly those less proven than his – may not be reliable enough.

Charlie Dalin may be a first timer on the race but the 36 year old, who grew up enchanted by the ocean racing giants – men, women and their machines – who mustered every two years for the Transat Jacques Vabre on the docks of his home port of Le Havre – has a dream programme with Vendee Globe winning potential.

A Southampton trained naval architect in his own right, Dalin’s IMOCA Apivia is designed by a small team led by America’s Cup winning architect Guillaume Verdier and the campaign is managed by 2012 winner Francois Gabart’s company MerConcept.

Apivia won last year’s Transat Jacques Vabre and was second in the Vendée Arctic and Dalin is the tip of Michel Desjoyeaux, the only skipper to have won the Vendée Globe twice.

“For me he is the best guy because he’s the only one I know who did four consecutive podiums on La Solitaire du Figaro,” Desjoyeaux said of Dalin. “That is indicative of his very high ability. And what he has shown since the beginning he got his IMOCA up to this high level.”

Normandy’s 39 year old Thomas Ruyant had to retire from the last race when his boat was nearly split in two in a collision with a floating object west of New Zealand.

He is back and widely fancied for the podium with LinkedOut – a second Verdier design which has been cleverly optimised. He led at the midpoint of the Vendée Arctic race and is considered a skipper with real talent and staying power and fire in his belly stoked by the disappointment of his abandonment.

Britain’s Sam Davies, fourth in 2008-2009, is the standard bearer for a record entry of six female skippers. Over the four years since the last race she has worked tirelessly to improve and optimise her 2010 launched Initiatives Coeur.

The 46 year old French based Englishwoman draws on the accumulated experience of more the 25 years of every type of ocean and offshore racing, not least leading Team SCA on the 2014-15 crewed Volvo Ocean Race round the world. Even armed with latest generation foils her boat will not match the top speeds of the newest generation but her experience and stamina will ensure she should be poised to profit if the newer boats falter.

There is strength in depth all the way through the 33 strong fleet, and more than ever – from front to back – the races within the race will be more engaging than ever.

Davies has a tight group of 2012 race vintage boats to contend with including Germany’s 39 year old Boris Herrmann (Seaexplorer-Yacht Club de Monaco) and 40 year old Frenchman Kevin Escoffier (PRB). It would not be a surprise to find any one of them on the podium in the middle of next January.

The skippers ages range from Switzerland’s Alan Roura who races his second Vendée Globe at the age of 27 to 61 year old Jean Le Cam, back for his fifth consecutive Vendee Globe. The ages of the boats has never been greater 23 years span Alexia Barrier’s 1998 launched TSE-4 MyPlanet which is starting its seventh round the world race and the latest foiling flying machines.

Nine nationalities are represented among them Britons Pip Hare, 46 years old from Poole who sails Medallia on her first race and Miranda Merron, 51, who lives in France, also competes on Campgane de France. Japan’s 53 year old Kojiro Shiraishi has a cutting edge, new foiler DMG MORI and he is looking to complete a respectable race.

Barcelona fireman Didac Costa, 14th in 2017, returns at 39 years old for a second Vendee Globe on OnePlanet-OneOcean which started life as Ellen MacArthur’s Kingfisher. It will be Costa’s third racing circumnavigation in five years on the famous IMOCA 60 footer which will celebrate its 21st birthday in February.

Italian Giancarlo Pedote, 44, has progressed up through the classes from Mini 650 in 2013 to now take on the world’s toughest solo race on Prysmian Group, his pathway mirrored by 57 year old Finnish airline pilot Ari Huusela who races STARK.

Conditions for Sunday’s 1302hrs start time off Les Sables d’Olonne look set to be close to perfect 12-15 knots of wind from the south east should ensure flat water for a fast sprint off the start line to one passing mark seven miles from the start line.

The fleet will then reach almost due west at high speeds into the first night as the breeze heads, progressively rotating south then south west as a front arrives. It will bring strong 25 knot winds with gusts to 40 knots and seas of 4.5 metres.

Then at the back of the front they will be able to race south in a decent northwesterly breeze. The complex question is passing across a ridge of high pressure and light winds before a second front arrives for the leaders on the night between Tuesday and Wednesday.

“For sure it’s a complex weather situation and we will have to throttle back a bit. It would be easy to make errors as some features are not very detailed on the files, so the thing is to see how much the fleet sticks together.

“But it is for sure not the classic situation you imagine for years and years, beating hard heavily west or we reach to Cape Finisterre then getting downwind. No, this time it is much more upwind work. I think, yes, you can lose but there are not many easy gains and you can certainly damage your boat early on in the second front. If the leading pack sticks together I feel the race will really start in the trade winds.”

ALL 33 VENDEE GLOBE SKIPPERS HAVE A CLEAN BILL OF HEALTH

All of the 33 skippers set to take Sunday’s start of the Vendee Globe have been given a clean bill of health, all passing the PCR Covid-19 tests which were taken 48 hours before the start. It will therefore be a complete 33 boat entry which will start at 1302hrs local time on Sunday.

No positive Covid-19 tests and no cases among contacts means the 33 skippers, 27 men and six women, have escaped the sword of Damocles which has been hanging over their heads for some weeks.

Any skipper with a positive test would not have been allowed to start. So it is a huge relief for the solo sailors and for all involved in these projects, some of which have been operating for four years.

Yves Auvinet, President of the Vendee Globe said :”The health protocol put in place by the race organisation has enabled the entire fleet to be kept safe for the start tomorrow. I would like to thank the skippers and the teams for respecting this system which was restrictive but nevertheless necessary in the current period. “