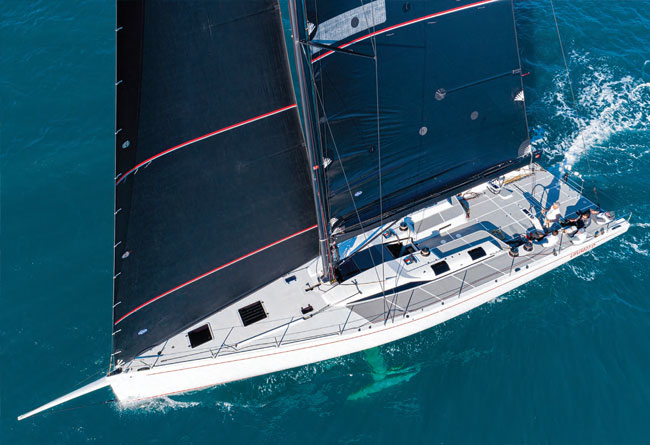 The new Mylius 60CK is the largest production canting-keeler ever. ‘Fast and sweet’ does not begin to describe the latest Italian beauty.

Mylius 60CK
In Italy, Seahorse previewed the new Mylius 60 Canting Keel, which made its world première at the Genoa Boat Show in September 2019. It is a yacht that redefines the genre of performance cruisers and it is currently the only canting keel production model of that size on the market. The Mylius 60CK is a refined, luxurious cruiser but it’s conceived and structurally built around the Cariboni canting keel, directly derived from the Volvo Ocean 65.

The experienced owner has had nine previous boats – the famous Cippa Lippa series – with which he has won countless offshore races. In particular he owned a Cookson 50 so he knows about canting keels (Seahorse Dec 2019).

The new Cippa Lippa Mylius 60CK came from Guido Paolo Gamucci’s desire to sail a larger and more comfortable yacht that is suited to long summer Mediterranean cruises with a large family including lots of grandchildren on board.

The “conditio sine qua non” of having a canting keel is dictated above all by his previous experience of much better cruising comfort obtained by a lower angle of heel. The yacht’s interior is carefully designed around the canting keel arrangement without compromising the level of comfort on board. One of the eight Mylius 60s, Fra’ Diavolo, recently won the St. Maarten Heineken Regatta in its category.

Like all Mylius yachts, this one is the result of the philosophy and strategic choices of the yard led by Luciano Gandini: everything takes place in house from the first concept to the development of the project, right up to the interior layout. The hull and deck (built in vacuum-infused carbon fibre with epoxy resin matrix) and the structures (pre-preg carbon fibre), are laminated in a female mould at a large facility in Poland, but always under the direct control of the Mylius project managers.

The boat’s designer is Alberto Simeone, one of the founders of Mylius, who coordinates an internal design team and takes care of every aspect from the first drawings of the waterlines to their validation with CFD; from the design of the exterior and interior to the calculation of the structures, down to every detail of the systems engineering, which is an area that has always been the pride of the yard and is managed specifically by another founding partner of Mylius, Mauro Montefusco.

The fine carpentry, aesthetic and functional details of the interior are the result of the passion and craftsmanship of Mylius’s exclusive in-house team of artisans.

The Boat
The sea trial in the waters off Punta Ala in Tuscany was a real eyeopener. The sails had just arrived and had never been hoisted before. The boat was presented in a mixed configuration, with racing rigging but with its full cruising interior installed. The complete transition from cruising to racing mode takes two people three days to achieve. There’s a lot more to it than the old approach of “take off everything that is not needed when racing”. The boat in racing configuration retains some bits of its interior as required by the rating rules, but it is a pure racehorse.

While waiting to leave the dock we noticed some interesting details on deck. Walking forward from the stern, our eyes were drawn to the powered traveller, which is recessed into the cockpit sole and located quite far aft to give a better geometry for the German-style double-ended mainsheet system. The elegant, lightweight wheel pedestals are placed well forward to concentrate the weight of the crew amidships.

On each of the wheel pedestals there is a full set of instruments and controls including a B&G Zeus³ plotter with a waterproof touchscreen that holds all navigation data and from which the helmsman can control most aspects of the yacht. Each pedestal also has a Garmin control module for the jumbo displays at the mast and a traditional magnetic compass.

Also on the pedestals are the touch controls for the canting keel, the hydraulic settings for the mainsail and the controls for varying the canard angle of incidence. All of this is within reach of the mainsail trimmer as well as the helmsman. These controls have made it possible to move the mainsheet winches (a pair of Harken 990 Racing 3 speed series) forward, away from the helm position, leaving room for the mainsail trimmer’s seat with a stainless steel support immediately forward of the helmsman. Aft of the mainsheet winch, another pair of hydraulic Harken 990s manage the backstays, the gennaker/Code 0 and the jib, with an in/out trimming system.

On the rounded white coaming is a flush plexiglass hatch that expertly follows the shape of the coaming. This is an aesthetic and construction feature that has become a trademark for Mylius. The deck is completely clean with sheets as well as halyards ducted underneath.

The boat has a carbon mast and boom from Hall Spars, which can be raked from 1.7° to 3.7° using the hydraulic forestay. The dual headstay configuration is noteworthy. To set up the yacht for racing, the cruising forestay with on-deck furling is replaced by a racing forestay and a 1.5-metre bowsprit is fitted.

Interior
Mylius yachts have always been characterised by their modern and clean-looking interiors. Inside this Mylius 60CK the yard has reached a new level of excellence with a great aesthetic balance between the dominant white décor contrasting with carbon fibre black.

The large, bright dining area with its carbon fibre table stands out on the port-hand side. The canting keel system has been carefully designed so that the whole thing fits under the cabin sole and the canard casing is positioned so that it doesn’t interfere with the living space.

A very interesting solution was found for the wet box of the canting keel, which can be easily inspected and has been covered with a padded sliding seat, providing an extra seat at the saloon table.

Among the many details that impressed us were the watertight hatch in the bow bulkhead between the crew cabin and the owner’s suite, and the splendid finish of the owner’s cabin, including shelves covered in Ultraleather (a synthetic material used in the upholstery of Porsche and Lamborghini sports cars), which are easily removable when the yacht is in racing configuration. Other features worthy of mention are the bow hatch with rounded edges that prevent the gennaker from catching when it’s being stowed below. There is also the option of a spinnaker retrieval system running to a drum in the stern.

The Sea Trial
The wind in the Follonica Gulf was around 9-10kts, with peaks of 11.5kts and no waves – ideal conditions for a first test without taking risks but enough to see the boat’s potential.

Compared with the fixed-keel version of the Mylius 60, the hull shape has been completely rethought to take into consideration the higher sailing speeds and reduced heeling angles predicted for the canting keel version. The 60CK’s hull has higher LOA : LWL and Bmax : BWL ratios. Fuller bow volume, flared midsections to improve lateral stability, an extremely flat run aft, a reduced canoe body depth and less rocker are all included in the design.

With construction entirely in carbon and a reduction of ballast weight to just 5180 kg – which is made possible by canting the keel to 40° on each side and a draught of 3.6m – the yacht’s displacement is reported to be under 15 tons in racing configuration.

The attention to detail in the yachtʼs technical and rig control systems is remarkable, on deck and down below.

In reaching conditions the Mylius 60CK planes with its bow high, like a skiff, thanks to the new hull shapes and aided by the lift generated by the canted keel fin. For safety, the boat is fitted with a crash box in the bow. In the event of a high-speed collision with a semi-floating object, this sacrificial bumper made in foam sandwich can be lost without any structural effect or loss of buoyancy.

When the crew (14 people in racing configuration) hoist the mainsail, the and No3 jib, the boat immediately comes to life. Helming this yacht is intuitive, easy and fun. It’s very responsive, feels perfectly under control and is extremely pleasant to steer. We easily achieved a speed of 8.5kts at 30° to the apparent wind and as soon we bore away the boat began to accelerate. With the canard in neutral position and the keel canted, the boat maintained 16°of heel, which allows it to use its entire waterline length.

When it’s time to tack, perfect synchronisation between the helmsman and the crewman operating the keel mechanism is crucial. The tacks seemed effortless and felt surprisingly soft, which was partly due to the expertise of the mainsail trimmer, Leonardo Chiarugi, who has a lot of experience aboard Cookson 50s.

The Mylius 60CK manoeuvres like a 40-footer even when gybing. The canting keel is provided with a quick release system that immediately drops it plumb by gravity. This is a necessary option in case of hydraulic system failure, but it’s also useful for speeding up some racing manoeuvres. The rest of the onboard hydraulics also have manual backup.

The Mylius 60CK is a truly interesting and impressively fast boat, currently unique on the market. This is a yacht that revels in planing in 20kts of wind, the champagne sailing conditions for which it was bred.