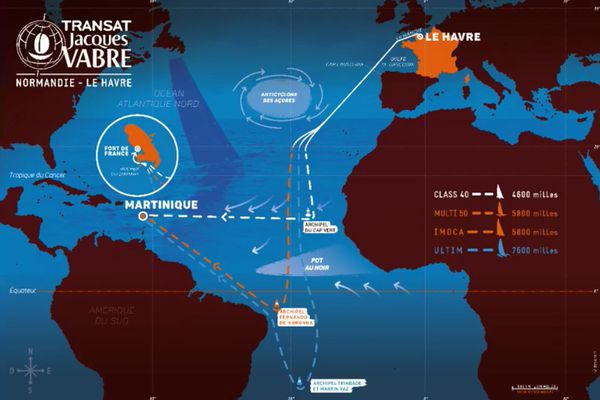 It’s already well-established as a landmark ocean race on the professional yacht racing calendar but the organisers of the Transat Jacques Vabre double-handed transatlantic race clearly have no intention of resting on their laurels for this year’s fifteenth edition which is scheduled to start on November 7.

As it has been for the last three editions the (to give its full title) Transat Jacques Vabre Normandie Le Havre race is open to only four classes: Class 40, and IMOCA 60 monohulls and Multi 50 and Ultim multihulls.

However instead of finishing in Brazil as it has done since 2015, this time the course will see the fleet race from Le Havre across the Atlantic to finish for the first time in the French Caribbean island of Martinique.

The four fleets will start at the same time but sail differing courses based on their size with the aim of them arriving at roughly the same time in Martinique.

Class 40s will sail the shortest route – a 4,600-mile transatlantic passage that leaves the island of Sal in the Cape Verde archipelago to starboard before heading west to the finish in Martinique.

The Multi50s and IMOCA 60s meanwhile will cross the equator and round the Brazilian archipelago of Fernando de Noronha, before turning north west to recross the equator on the way to the finish – a point-to-point distance of 5,800 miles overall.

That leaves just the Ultim class to of course sail the longest route of all. For them the course will be 7,500 miles and take them across the equator and as far south as Rio de Janeiro where they will round the Trindade and Martim Vaz archipelago before heading back across the equator on the way to Martinique.

Details of prospective entries are sparse at this point but the Class 40 division must surely be expected to attract a healthy showing, as hopefully will the thriving IMOCA 60 class, as well as the Multi 50 class which has been showing signs of a renaissance recently.
In the Ultims Armel Le C’Leach and Kevin Escoffier have announced they intend to take part on the at this stage yet-to-be-launched Banque Populaire IX. Sodebo skipper Thomas Coville has also indicated he intends to compete but there has been no news on who his co-skipper might be. Meanwhile Franck Cammas and Charles Caudrelier have confirmed that they will take part aboard the Gitana Team Ultim, Maxi Edmond de Rothschild.
Quite what the prospects are of Francois Gabart’s existing (ex-Macif) Ultim (or indeed his new Ultim currently under construction and due to be launched in June) taking part are unclear at this stage – but hopefully we can expect some news on these fronts soon.