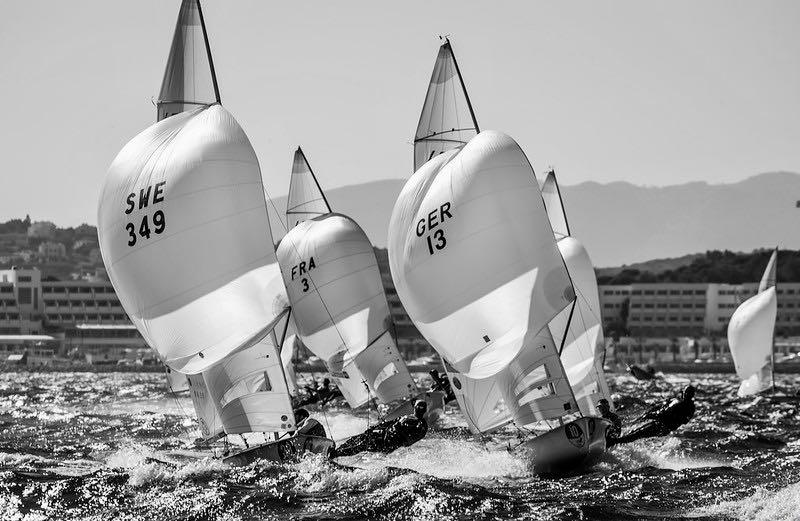 Andy Rice reports from the 470 Euros in Turkey…

The wind was whistling through the rigging for the second day of the 470 European Championships in the holiday resort of Çeşme on the east coast of Turkey. With a similar wind strength and direction to day one, the fleet knew that the left-hand side of the course would be the place to be. That put good starting at a premium.

GERMANS ON THE CHARGE

In their first race, Simon Diesch & Anna Markfort (GER) made a great start and pretty much two-tacked the upwind leg, hitting the corner of the course and making their boatspeed pay. “You have to be smart sometimes, but sometimes it’s about speed,” smiled Markfort, one of the tallest crews in the fleet. “We’re one of the heavier teams and we enjoy those conditions.”

Like a lot of teams in this fleet, Diesch and Markfort have only recently teamed up, so every day is a learning opportunity. “We haven’t really sailed together for that long. We started together in May, so we haven’t gone through the full range of conditions. Right now the learning is fun and it’s really good sailing in a new team.”

Not surprisingly, the Germans wanted the pin end of the line for their next race too, but didn’t manage to get the lane they wanted. “One of the Spanish boats touched the pin end, which forced Austria to tack and forced us to tack to avoid a collision,” said Markfort. “So we were going on port, behind the fleet, out to the right hand side, and I can report back that it’s not that good over there!”

Fortunately they could play a ‘get out of jail card’ on the first spinnaker run. “We had a good first downwind. I think the inner loop course was in our favour in that race because we could just gain boats while everyone was still quite closely bunched.” Even though extra weight is considered a disadvantage downwind, Markfort reckons the weight helps all the way around the course in big waves, when she can use her height and leverage to hike the boat over the wave top and get it surfing down the front of the wave.

Jordi Xammar & Nora Brugman (ESP) had dominated the previous day in similar conditions, but couldn’t quite match that 1,2,1 mojo of day one. Scores of 6,3 put the Spanish back into second place, although still on equal points with the new yellow bib wearers from Germany.

Meanwhile in blue group, two teams came out of the day with equal scores, a 4,1 for Luise Wanser & Philipp Autenrieth (GER) and a reciprocal 1,4 for Anton Dahlberg & Lovisa Karlsson (SWE). The Olympic silver medallist from Tokyo, Dahlberg paid tribute to the level-headedness of his crew. “It was a long day. It was a beautiful day, we had ups and downs. I was a bit too frustrated at times, but Lovisa was telling me to enjoy the moment, and it was good to get that reminder.” The Swedes remain in third place overall while Wanser & Autenrieth move up a place to fourth overall, pushing the Spanish crew of Silvia Mas & Nico Rodriguez back to fifth place in the standings. “Not quite as good as yesterday,” Rodriguez admitted, but the Olympic bronze medallist is happy with progress for this new pairing. “No major mistakes, we are in the hunt and tomorrow is gold fleet. Lighter winds, a different type of sailing.”

Nitai Hasson & Noa Lasry (ISR) are one of the lighter teams and will look forward to softer breeze, if that’s what happens on Ilica Bay. The Israelis sit in eighth place overall, but are ready to pounce. “Tomorrow could be different, totally different,” said Hasson. “We have never sailed in light wind here in Turkey, we have only experienced the Meltemi breeze and only from the northerly direction. So tomorrow will be interesting. We are light. I think some teams will score high points tomorrow and we will try to to stay with a solid set of results.”

That’s the key to 470 racing, or any other kind of sailboat racing for that matter. Will the heavier Germans be able to maintain their advantage, or will a different set of lighter teams come to the fore? It looks like Çeşme is set to offer an all-round test of racing ability this week.

Thursday marks the start of the split into gold and silver fleet competition. Past Women’s 470 World Champion from Japan, Ai Kondo Yoshida and her crew Naoya Kimura picked up a UFD disqualification for starting too early in the first race of today’s session. Agonisingly this puts the Japanese team just two points out of making the cut for gold fleet.