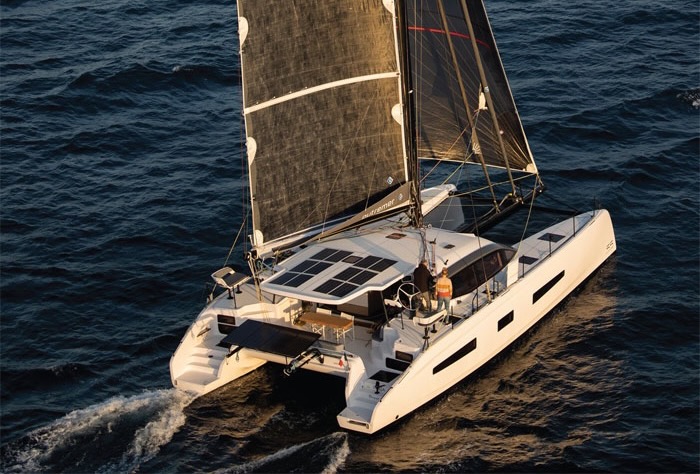 Ask the movers and shakers in the design world what defines performance and many will say that it is not always about straight-line speed. Instead, handling frequently comes top of the list. Multihull builder Outremer would be among the first to agree.

Throughout their 37 years, the French shipyard has created a reputation for producing cruising cats with a focus on performance. And while their models have a habit of going well in a straight line, how they handle is just as important. The fact that their earlier boats often had tillers instead of wheels is just one of the clues as to what makes their boats so different. Helming for the hell of it is a core part of the Outremer philosophy and in this respect the tiller says it all.

But Outremer has gone way further than simply making a cat that feels good from the comfort and security of a Recaro-style motorsport seat on the windward hull. While their boats’ performance under sail has frequently managed to attract seasoned monohull sailors, the range was created for blue water, live-aboard sailors who wanted to head over the horizon to live the cruising dream and for some to achieve a circumnavigation.

For all, handling is frequently at the top of their wish list. In recent years, the cat market has exploded for all kinds of reasons, not least that they offer so much more space and tick many more of the boxes when it comes to sailing with friends and family. The increase in popularity of voluminous cats has helped to fuel the growth of the charter boat market and has introduced many to the benefits of multihull sailing.

During a similar period, the sailing scene has also witnessed a rapid increase in speed from foiling Cup machines through to high-performance monohulls. This has also fed into the broader multihull world with several companies pushing the performance boundaries. Today, flying a hull for a cruising cat seems as acceptable as low-profile tyres on a family estate car.

Meanwhile, Outremer have remained with their original overall objectives to create slippery, yet easily managed multihulls while at the same time innovating, modifying and generally developing on a concept that is not only well established, but proven. Interestingly, their views on performance, construction and suitability are rather different from what you might expect. But when some second-hand Outremers are selling for more than new ones, it is clear that consumer confidence in their approach is as solid as the boats they build.

‘From our point of view, blue water sailing is more about safety, reliability, ease of maintenance and less about squeezing an extra mile out of the day,’ said Outremer’s Matthieu Rougevin- Baville. ‘We have had plenty of racing sailors who have come to us because they have either heard of the Outremer performance or have experienced the boats first hand. They often go on to discover that performance in the context of blue water cruising is not quite what they had thought.

‘One example is a famous racer who said that he didn’t want the ugly furling headsail on the front of his boat. But after he had been cruising alone for a few weeks he came back and took the furling sail out of storage. 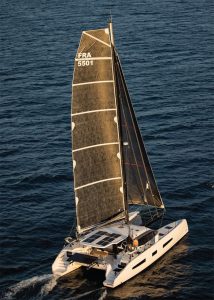 ‘The reality is that for people who are used to having distance or speed at the top of their list when racing, performance starts to mean something very different when they are cruising. For example, the ability to sail well and comfortably upwind appears higher up the list of priorities and is a performance factor.

‘Performance can also mean allowing you to sail under canvassed to stay safe yet without making big compromises on speed. This is something that is particularly important to owners of ours who are sailing long passages shorthanded.’

Comfort is another term that covers a wide range of factors where soft furnishings and hotel style appearances are way down on the list. Yet, Rougevin- Baville believes that, like performance, comfort is an area that has a much greater part to play in the overall design and build of the boat than many people expect.

‘There are plenty of new designs out there that are pushing the straight line performance of a cruising looking cat to the point where flying a hull is the norm.

But to achieve this as a manufacturer means making key decisions about the fundamental design of the boat that will then have a big influence on what you can offer when it comes to comfort,’ he says. ‘For example, hulls will need to be narrower which reduces internal volume and limits what you can achieve in the sleeping accommodation.

‘Weight is also a big issue which leads many to build using expensive and sophisticated foam cored construction techniques to keep the displacement down. We don’t believe that this is the right approach for a genuine blue water cruiser.

The trouble is that you are potentially more vulnerable if you go aground or collide with something, which is bound to happen at some stage when you’re blue water cruising. Instead, we believe that in the real world you should be allowed to make mistakes and not be compromised by them.

‘As a result, we build our hulls using solid laminates for the very bottom. But of course, because we are also focused on speed and handling, keeping the weight down wherever possible is still very important, so we save weight where it matters while maintaining our overall objective to create a solid and robust cat. We achieve weight savings through the use of resin infusion which will typically save around 500-600kg. Our main bulkheads are carbon foam core but auxiliary ones for watertight compartments are wood epoxy and all are laminated in place.’

‘Building this way means we can achieve both a robust and reliable boat, but also a boat that can deliver good average speeds across a wide range of conditions. The goal across our entire range is that typically you should be able to sail at windspeed until 10-12 knots. Ten knots for the average sailor and 12 knots for those who want to spend a bit more refining the specification with items like a carbon mast. Then, in 12 knots of wind we would expect to be sailing at 12 knots, without flying a hull.

‘At the breezier end of the scale there’s a popular misconception that modern cruising cats can’t sail upwind in 25-30 knots of wind, we disagree. Our boats sail in this and more, plus they achieve this without creaking or groaning. And they are comfortable too, because we believe that comfort is as much about confidence in your boat as it is about what you feel around you.

‘Visibility is a good example of something that contributes to comfort and confidence,’ he continues. ‘The size, height and number of windows is very important in all our designs. Being able to see all around, whether you are sitting or standing, whether inside or out, is every bit as important as the speed of the boat.’

Aboard the new Outremer 52 the drive to achieve an even better experience on the helm while also improving the practical aspects of handling can be seen with the canting wheels that allow the steering position to be moved from outboard on a comfortable bench on the hulls to inboard within the protection of an enclosed cockpit.

Internal volume is another area that Outremer has spent a great deal of time refining. When compared with the popular Outremer 51, the 52 creates a feeling of more space in the cabins by lowering the beds, but without reducing the width.

Elsewhere in the accommodation, headrooms have been tweaked and improved to create a more open, spacious feel in an overall layout that flows more freely. Payloads have also been improved.

‘Twenty years ago, the payload would have been around 1.6 tonnes, today it is three tonnes while at the same time the performance has increased. Being able to bring what you want with you, be it friends or more equipment or supplies, this contributes to the comfort side of the equation.’

The balance between performance, comfort and accommodation lies at the heart of the Outremer formula but given the marketing noise that is present in the fast-moving multihull world it’s not always easy to see where various models and builders sit in the overall scene. But Rougevin-Baville has a simple but effective way of explaining the relationships.

‘We see the correlation as a triangle where performance is at the top and price and accommodation in the other two corners,’ he explains. ‘If you go for outright performance you move yourself away from cheap and accommodation. So, internal volume reduces as hulls get narrower leaving less room for spacious cabins. Conversely, if you move towards the comfort/accommodation base line you do so at the expense of performance. Our aim has always been to be in the middle.’

Yet, for all the details on the long list of refinements and innovations that have been included aboard their two latest models, the 55 and the 52, the most impressive statistics lie in their order book.

‘The 55 was a big change for us, we put a great deal of work into refining this design and since its first launch in January 2021 we have sold more than 80 boats,’ he says. ‘The 52 has sold over 60 since we announced it.’

There are few things more convincing than a queue of like-minded people.