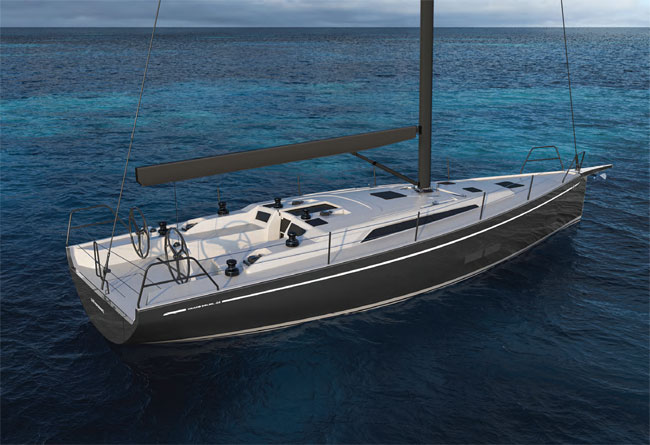 The marriage of the champion young Italian yacht designer Matteo Polli and the strong, successful and well-proven technical team at Grand Soleil really is now delivering some remarkable yachts.

A new yacht launched by Grand Soleil is bound to generate a bit of a buzz. The Italian marque’s parent company Cantiere del Pardo has enjoyed a remarkable run of popularity and commercial success over the last six years, easily outpacing the market as a whole and steadily growing its revenue while some of its rivals have declined.

The shipyard’s strategy boils down to releasing one new model a year, alternating between its two parallel ranges of yachts, the Long Cruise and Performance series. This year’s launch of the Grand Soleil 44 Performance – announced back in January at Boot Düsseldorf and due to make its début at Cannes in September – has drawn more interest than usual because Matteo Polli is now involved. To back up the hype, it’s worth noting that even before the official announcement of the new model, half a dozen of these yachts were already sold off plan.

Polli’s designs have dominated ORC handicap racing in recent years, often with the designer himself on board. Working first with Cossutti and then heading up his own eponymous yacht design agency, he has drawn the two most successful designs in ORC history with six world championship wins and podium results at most major regattas for more than a decade.

The design brief for the GS 44 Performance, Polli’s first yacht for Grand Soleil, demanded the almost impossible: a genuinely competitive cruiser-racer with the potential to beat purpose-built racing yachts in toplevel competition. As any experienced racing sailor will tell you, when yachts are marketed in those terms they all too often turn out to offer the worst, rather than the best, of both worlds.

Main picture: the first design by Matteo Polli for Grand Soleil is a 44ft yacht that can be configured either as a racer-cruiser or as a fully optimised IRC or ORC racer (race version pictured above). The demanding design brief required a high-volume hull with good load-carrying ability… but without any negative impact on performance.
Not only that, but the GS 44 Performance also had to be stylish and elegant with a high-volume hull… and in cruising mode it had to be easy for an average family crew to sail in all conditions. That was a daunting brief although perhaps less so for Polli, who has managed to do it several times before.

‘It was a challenging project,’ he admitted at the press conference in Düsseldorf. ‘But I think I have found the best possible compromise between cruising ability and potential racing results.’ The design process involved a lot of high-resolution CFD modelling with software tools recently developed for the Luna Rossa America’s Cup team. Four different hull geometries were extensively tested to find the sweet spot between the key parameters of performance, easy handling and rating optimisation. While the latter was certainly a constraint, Polli said there was never any question of designing a slow boat for a rating advantage.

The resulting hull is of course carefully optimised for IRC and ORC racing. Its key features include a long stern overhang, a voluminous bow, a flat bottom, vertical topsides amidships and a fairly narrow aft water plane with prodigiously flared aft quarters and four metres of beam. This gives the boat a long waterline and ample form stability at moderate angles of heel while minimising the wetted area in light airs. Exterior styling is by Nauta Design, who also designed the interior. It’s an elegant enough shape to carry its high-volume interior with genuine grace and it’s unmistakably a Grand Soleil when viewed from any angle.

Various sailplan configurations were also explored and a range of different mast positions were investigated during the CFD phase of the design process. It became clear that stepping the mast further aft with a larger foretriangle would deliver several benefits. Most important, there was a performance advantage. Balance was also improved, especially in choppy water. Third, it turned out to be better for the boat’s ORC rating, too. ‘We discovered that it gave better acceleration when coming out of tacks and allowed us to reduce the height of the mast,’ he said. ‘And a lower centre of gravity is also an advantage for cruising.’

The fully race-optimised version of the 44 has a taller carbon rig, transverse headsail sheeting tracks, six winches and much simpler, less luxurious living quarters below decks to reduce the boat’s overall displacement weight. The cruiserracer version has a shorter rig with alloy spars, a self-tacking jib and a simpler deck layout with lines led back to four winches just forward of the helm. Moving the mast step aft also enabled the interior design team to enlarge the yacht’s saloon and twin aft cabins. Three keel options are available with draughts ranging from 2.4m (ORC), 2.6m (standard) to 2.8m (IRC).

On deck
Up at the sharp end, a bolted-on carbon bowsprit adds more than a metre to the yacht’s overall length and houses a stainless steel frame that projects the bow roller far enough forward to keep the anchor well clear of the stem. A through-deck headsail furler sits on the stemhead and a nice pair of pop-up deck cleats fold down flush when not in use.

The toerail is wide enough for comfortable hiking – also useful for mounting any extra blocks or fittings. There’s a nice flat expanse of laid teak to give a secure footing for sail changes and other foredeck work, and the main forehatch is a decent size for dragging sails through.

The low-profile coachroof rises subtly above the deck about a metre forward of the mast with two small flush hatches and a recessed, slightly curved track for the self-tacking jib. Just aft of the mast two short, straight transverse tracks serve as sheet leads for the genoa. Ducts in the cabin top lead 12 lines back to the cockpit from the base of the mast. A neat idea on the sidedecks is the row of red LED lights discreetly mounted on the inboard-facing side of the toerail, helping crew to avoid any trip hazards when going forward in the dark while preserving their night vision.

The cockpit is substantially longer than on previous models of a similar size. In typical Grand Soleil style, it’s split into two areas with a safe, comfortably cushioned passenger zone forward and a working area aft, although the the race version has winches in the forward part of the cockpit, too. The headsail sheets run through the high coamings that surround the forward half of the cockpit, emerging in front of a beefy pair of hydraulic winches at the forward end of the working cockpit with a couple of sheet bins on hand to prevent a snakes’ wedding of tangled rope on the cockpit sole. The mainsail is sheeted to an almost full-beam track recessed into the sole just forward of the twin wheels. A single adjustable backstay is anchored in the middle of the open transom.

On the racing version, a pair of winches mounted on the forward cockpit coamings and another pair on the aft end of the coachroof give a wider range of sail-trimming options for a full crew. The cruiser-racer version has all four winches within easy reach of the helm so that for shorthanded cruising, the helmsman can effectively sail the boat solo with headsail and mainsail sheets to hand.

Down below
A lightweight, stripped-out racing interior is of course available. The dual-purpose alternative is a full cruising interior with a three-cabin layout clad in white hull liner panels and light hardwood veneer, with proper fiddles on most surfaces and ample stowage throughout including plenty of eye-level lockers and wellengineered drawers. All cabins and the saloon have decent-sized through-hull windows to let light in and give a good view out.

The cruiser-racer version has the master cabin up forward with an aftfacing queen-sized island bed and a private en suite heads. There’s also a big sail locker in the forepeak. The saloon has an eight-seater dinette with a straight settee opposite. Abaft the companionway is the main heads and separate shower to starboard and a large, L-shaped galley with fullsize appliances to port. It’s classic Nauta design, practical for use offshore and comfortable in port, with Grand Soleil build quality.

Who says you can’t have it all? We await the GS44 Performance’s first racing results with interest.