Skip to content
You are here
Home > Advertorial > The best yet? 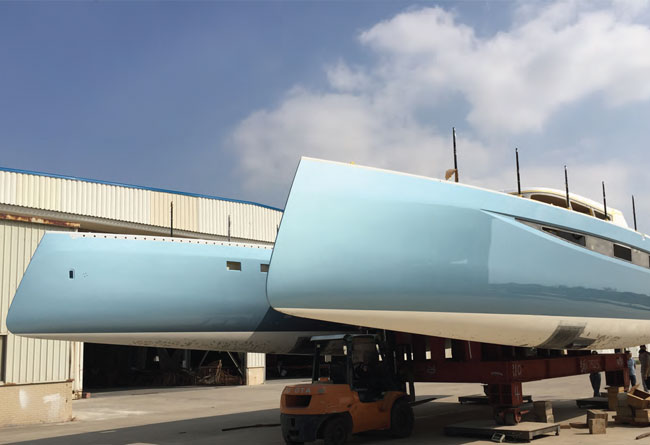 Dripping with custom features and with wireless control throughout the yacht the latest Morrelli & Melvin-designed HH66 cat from Hudson Yacht Group was created with one particular emphasis in mind – performance.

For a few years now, Hudson Yacht Group has been the genre-leader in performance luxury offshore catamarans by combining innovative design from Morrelli & Melvin with outstanding raceboat build quality driven by veteran boat builder Paul Hakes and his team at the Hudson Yacht Group facility in Xiamen, China. Even with a brief interruption due to the virus precautions, this massive operation is still in gear to deliver on its years-long order book of the full range of HH models: the HH50, HH55, HH66 and largest model to date, the HH88.

With some customisation details found in each, all these models nonetheless still consistently deliver on the basic Hudson Yacht Group promise of high-tech design, practical utility and performance in sailing, comfort for the owner, crew and guests, and high construction quality and aesthetics appropriate for this elevated class of yachts.

The latest model to exit the shop doors in Xiamen is possibly the most exciting built to date: HH 66 hull number five (which is technically hull number four), built for a US-based client who has a particular focus on performance but not so much to sacrifice core values in non-racing leisure use.

The day-racing circuit in the performance catamaran sector has been growing steadily, with many entries in several races and regattas held throughout the Caribbean in the winter and numerous events in the Mediterranean in the summer. These are turning out to be more than just sunny holidays: the scene is now sprinkled with new designs, pro sailors and owners, all hungry to win.

The scene has evolved to now be quite competitive, so much so that even as a veteran of more than a few America’s Cup cycles, Hudson Yacht Group designer Gino Morrelli remarked, ‘sometimes I wish we could slow down the arms race!’

Nonetheless, some big cat owners love sailing their boats enough to stretch their racing interests from day races to longer contests, such as the offshore 600-mile classics like the Newport-Bermuda, the Fastnet, and the Caribbean 600 races, in addition to much longer adventures like the ARC transatlantic race, the Cape to Rio race, the Transpac race to Hawaii and the revived LA-Tahiti Race – at 3570 miles, this race will test the endurance of any boat and team, and what better platform than a luxury performance cat?

The genesis of this latest HH66 project may have its roots in sibling rivalry: the owner’s brother has been an active and successful monohull racer for many years, both inshore and offshore, and recently had designed and built a custom 53ft carbon multihull that he’s been racing for the last few seasons in the Caribbean. Both brothers have an appreciation and admiration of high technology, which is an important feature in the HH66, but not just for the sake of technology: choices were made to optimise function whilst minimising weight and avoiding any excessive hassle of installation and maintenance.

For example, Paul Hakes explains that the use of wireless technology for the control systems throughout the boat has saved many hours in installation and many kilos in wire and harness weights, yet still remains reliably functional.

‘We worked closely with Wayne Meretsky at Kinetic Scientific for the control systems and Bruce Schwab at Oceanplanet for the batteries and energy management systems,’ says Hakes. ‘This 66 has a relatively lightweight bank of Lithionics lithium batteries operating efficiently and safely at 48 volts DC. Combined with high-powered alternators from the Yanmar diesels, this electrical system can deliver most of what’s needed on board while saving the hassle, expense and weight of a dedicated generator set which needs its own mounts, tanks, fuel, wiring, etc.’

The elegance of this system’s design is impressive: there is no breaker panel, for example, the system design has opted instead for a series of Garmin switching modules to control the energy flow. The wireless operating environment almost resembles a corporate office, where wireless log in privileges allows controlled access to specified parts of the onboard systems.

‘It’s very clever,’ explains Hakes, ‘When you walk aboard, you log in and this allows you access to controls that pertain to your function while you’re on board. For example, the captain or owner will have full access to all systems, while the guests may only have access to the climate control and entertainment systems in their cabin. This makes it simpler to operate and harder to lose access control to the critical systems like propulsion, navigation or autopilot control.’

This feature helps contribute to the overall net loss of some 1,500kg in weight compared with the lightest-to- date built HH66, hull number three Nala. For catamarans where every kilo counts, this is gold.

To reach this amazing figure, which is compared with the samesized boat also built in carbon with careful attention to weight, Hakes credits an incredible attention to detail in reducing weight without compromising on strength by project manager Thomas Johnson and production manager Yuchun Chen.

‘The hull and deck laminates on this boat are standard resin-infused carbon-epoxy-Corecell foam,’ says Hakes, ‘and even if we changed our process to do it all in pre-preg, the weight savings would not be substantial but the increase in cost would.

The internal structures are also the same as in the other HH66s and have proven to hold up well: HH66 hull number one is now in her fourth year of heavy use, having raced in more than 15 regattas and crossed the Atlantic six times with no signs of wear. Much of our weight saving therefore comes with other changes that we have made in the design and fabrications on deck and in some interior elements.’

This includes an alteration of the cabin top from being a large overlapping “eyebrow” design that helps provide shade to the glass enclosed main salon, to something lower in profile with less weight and windage. The shading is taken care of by use of a speciality glass product from Corning called Gorilla Glass that is used on the face of mobile phones: it is pure silica, extremely strong and has a built-in shading feature that adjusts with a low-voltage rheostat, helping to prevent the yacht’s salon from becoming a greenhouse.

The cockpit layout is streamlined to reduce complication and weight, where the table actually lowers flush to facilitate crew movement from one side to the other while racing. Lastly, the carbon-PVC core interior cabin panels and furniture have been pushed to be as light as possible with a thin teak veneer and yet are also able to withstand abuse such as taking the impact load of a free falling crew member should the conditions get rough.

‘In rethinking everything we found other seemingly small items that all added up to unnecessary weight,’ says Hakes. ‘Like drawers: there are some 40 to 50 drawers on board and by changing the design to eliminate the slider material we saved maybe 80kg in weight.’

Going to a custom high-modulus one-piece spar made by Lorimar also saved weight, even though it is nearly two metres higher than the already tall mast stepped on Nala. The sailplan is generous, and with a wardrobe or seven to nine sails planned, it can assure the boat has plenty of horsepower in every corner of the wind speed/angle matrix.

The final unique features of this very special HH 66 are usually not seen as they reside below the waterplane: the rudders and daggerboards. These are an entirely new series of appendages designed using America’s Cup-level technology with help from VPP software developed by JB Braun and Michael Richelson at North Sails and adapted for use with the big cat from its earlier use in the 35th AC. Construction of the T-rudders was by Stu Wiley at Al Fresco Composites in Rhode Island and the complex curved daggerboards were built by Jim Betts in Anacortes, Washington.

Mark Peters and Ferdinand van West at Morrelli & Melvin produced the design and engineering of these special blades, the result of an extensive design study of options using their adapted six degrees of freedom VPP.

‘We had many choices in shapes to explore,’ explains Peters, ‘including C, J, T and so on. In fact we looked at 10 different configurations and combinations and eventually arrived at a modified C shape being the best for the overall performance of the boat.’ The studies looked at predicted performance over offshore course models, such as that used to rate boats in the Transpac race to Hawaii.

‘Since the boat is 6.5m wide we calculate that the windward blade produces 10 to 15 per cent of the righting moment, which is about a ton of downward force,’ says van West. ‘And the leeward board produces from 15 to 30 per cent lifting force, so on 16 tons this is a lot of load.’

It is not enough to break the hulls free of the water like a Moth, but it does have a substantial positive effect on performance. Which begs the question: just how fast will this special HH 66 go?

For now, all we’re told is ‘it’s classified’.