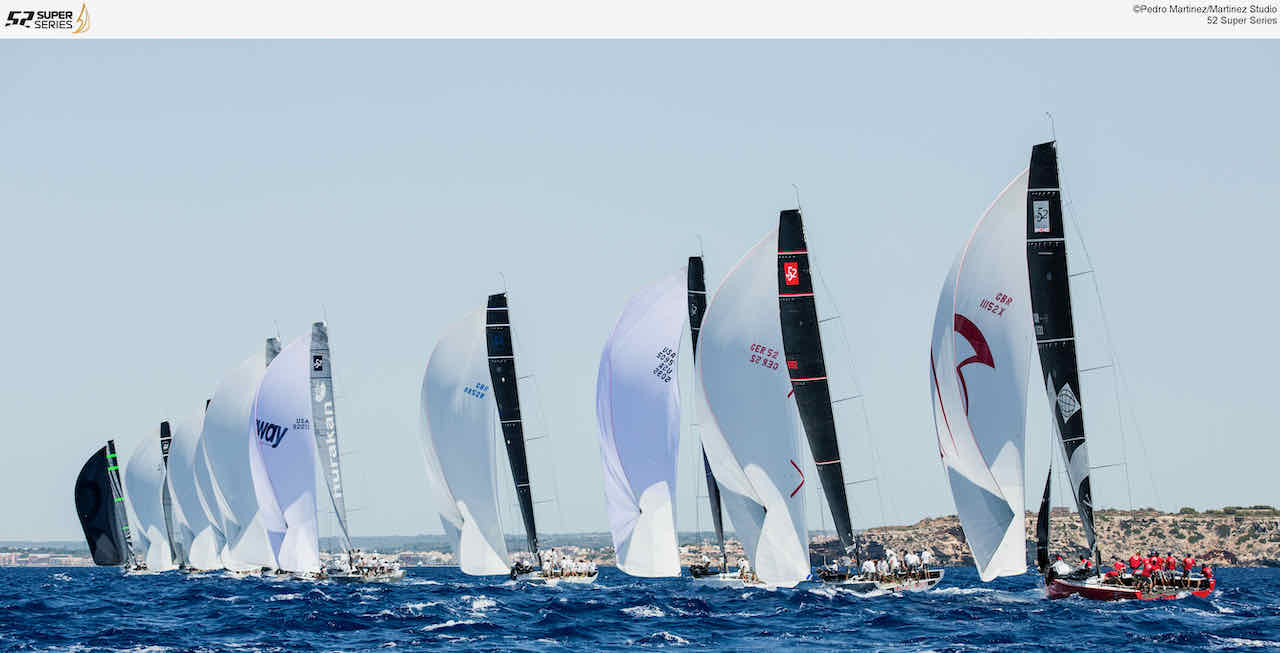 Never before has the 52 SUPER SERIES seen a finale like that which should unfold next week on the Bay of Palma. At stake are the Rolex TP52 World Championships titles and, as this will also be the concluding regatta of the short but incredibly intense 2021 season, the winners of the 2021 52 SUPER SERIES title will also be decided over five days of racing.

While every afterguard worth their place on the world’s leading grand prix monohull circuit knows their way up and down the Palma sea breeze race track in summer, a showdown like this has never been played out in November when the winds can blow from very different directions, sometimes even with big, choppy seas which are most unlike the Mallorcan bay’s normal sea states.

The overall Rolex TP52 World Championship title has only ever been won by four different teams. Niklas Zennström’s Ràn Racing and the Roemmers family’s Azzurra won the world title once apiece, Doug DeVos’ Quantum Racing have won three times and the crew that hold the world title won in 2019, Harm Müller-Spreer’s Platoon have two wins to their credit having also won in 2017 in Scarlino, Italy.

But the fleet has never been tighter nor the quest for the overall circuit title closer. After two of this season’s three regattas the overall leader board shows five teams within four points of each other. Overall leaders Platoon and Quantum Racing are both tied on 46 points and Andy Soriano’s third placed Alegre and Takashi Okura’s fourth placed Sled are both locked on 47 points. Fifth placed Phoenix of the Plattner family are on 50 points.

Logic says that Platoon come to the Bay of Palma with a tiny sliver of an advantage. Not only are they the defending world champions but they won the most recent regatta, the Menorca 52 SUPER SERIES Sailing Week.

“Obviously the conditions are not going to be the same,” says Platoon’s America’s Cup and Olympic gold medal winning strategist Jordi Calafat – a native of the Bay of Palma.

“The wind in November depends more on the fronts and not on the thermal breeze that does not usually enter because the land no longer warms up. And on days when there is a breeze, it is usually not very strong. The weather conditions can be very varied, you can have everything. You have to be prepared for anything: a week of wind and waves or the northerly land breeze with flat sea.”

Calafat reflects that they, like all of the top contenders, have been getting more consistent as their Mahon win showed. And three penalties in August’s Puerto Portals’ season opener tells its own story.

“I think that in Portals we screwed up a lot with these penalties. This showed how long we had not raced, we were a little ring rusty for this level of competition. In Mahón we changed things in the way we sail and it went well for us. We want to continue with this momentum. To win championships you have to be super consistent. It is the one who makes the fewest mistakes is in the end the one who wins regattas and titles. It is no good winning races if you collect maximum points in the next race.”

After a rough start Quantum Racing and Bronenosec hit a run of consistent form in Mahon. The American flagged team are pitching for their fifth 52 SUPER SERIES title at the same time as their fourth World title. Terry Hutchinson, Quantum Racing’s tactician, admits that he, particularly, felt the effects of the long lay off from TP52 racing and, he feels, now are coming good at the right time.

Hutchinson has been taking great pleasure from match racing practice in J/70s with young sailors from his local naval college at home.

“It is exciting, really exciting and so many teams are so close,” he said. “We have struggled for consistency and that is no more complicated than me getting back into it and helping get the boat in the right spot at the right time. Doug (DeVos owner-driver) has been doing a really great job. We knew surviving Mahon would be important as it is a hard venue to race at. The things that have kept us in contention for the season to date are our boatspeed and our boat handling and Doug’s consistency around the starting line.”

“And that is the really exciting part about going into this is that I know we have not yet sailed our best regatta yet. And the adjustments we have to make to do that are small. And that leaves you with some optimism that if we stay committed to how we race and how we can do well. But each team can do well and has the same kind of internal debrief we have.

“Each team has grounds to be optimistic too. I look at Bronenosec as a boat which at the last regatta had a penalty but would have been second or third but they have a great programme and are ready to do well, Platoon are nice and consistent and we are going to a venue that if there is a boat tailor defined for Palma it is Platoon, they will be really good. It is all to play for.”

While the points are super close, there are different pressures on the different contenders among the ten boat fleet. Victory for Platoon would surely clinch their ever first circuit title having been runners up three times, in 2017, 2018 and 2019. Correspondingly Quantum Racing would likely prioritise the circuit title over the world title. Alegre, second in Mahon after an unprecedented opening salvo of three wins, have the capacity to win the world title and the circuit, as do Puerto Portals winners Sled. Meantime the likes of Phoenix – which have Tom Slingsby back as tactician – Bronenosec and Provezza could step up for the world title win.

Slingsby has had an extraordinary record of diverse successes over the course of his season in Europe, spanning everything from the Moth Worlds to Sail GP to TP52 and Club Swan 50 regattas. He would love to return home to Sydney, Australia with the Rolex TP52 World Championship title. Phoenix is widely described as one of the quickest TP52s on the water at the moment.

“It is hard to say how we will do,” said the Australian Olympic gold medallist and America’s Cup winner.

“Portals showed that as a team there is a lot of talent on board and I was impressed by the commitment and the speed of the boat, there is a great dynamic. I honestly think we have the talent and the boat to win if we can put together a good regatta. We are going out with no pressure. It has been a long season but I would love to go home on a high.”