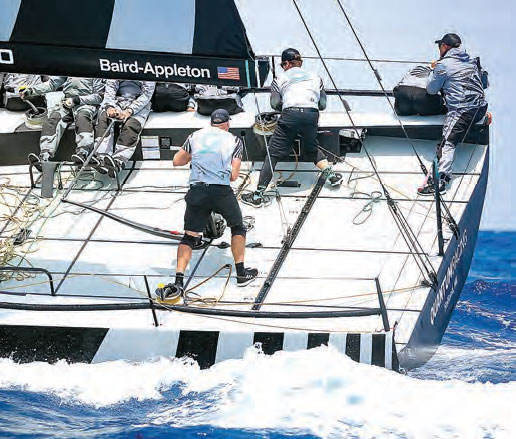 52 Super Series communications ninja Andi Robertson updates on the goings on across the international fleet over the winter break prior to the season-opening regatta in Cape Town, South Africa.

The requirement to ship to Cape Town, South Africa mid-January meant the ‘off-season’ for the 52 Super Series shore crews was extremely busy. Winter leave has been pretty much non-existent, particularly since many teams chose to convene in the middle of December in Valencia to validate changes, introduce new crew and check sail design updates.

That’s not to say that there have been many big changes to boats and hardware for 2020. Falling in line with fellow Vrolijk design Platoon’s 2019 initiative, Provezza are the only other team to bite the bullet and add a third pedestal behind the traveller.

Weight aft, lifting the bow more and earlier off the wind in the breezier conditions is a goal for the Vrolijk pair which were a little off the pace of the quickest Botín designs in the breeze in Cascais and Porto Cervo last year. In stronger winds the two Vrolijk boats are also looking to sail with more rake, while kites are more twisted, reducing heel angle – a direction most of the fleet are taking this season.

Interestingly, in the North camp the end of 2019 debrief among teams proved how very similar their sail designs are considering that different designers work with each of the teams.

Only two certificate updates are allowed per year and so any changes made have to be right. The concern for the Vrolijk designs was in optimising for the stronger breezes anticipated off Cape Town without losing their sweet spot edge in 10-12kt, which serves them so well through the rest of the season when you have to be strong across all four remaining Mediterranean events.

Takashi Okura’s Sled ruffled a few feathers by dominating in the breeze in Porto Cervo last autumn, literally whitewashing the fleet. Pre-season the question was whether they could carry that form into 2020. ‘We certainly had pace in the breeze in Sardinia but we were also good when it was lighter,’ said Sled main trimmer Don Cowie. ‘We made some changes to the rig set-up and to the way we trim the boat, plus on the helm Mr Okura really enjoys those breezy, flat water conditions. It was a combination of all these things. But we did have our sails just a bit different.’

Azzurra were equally good across the wind range last year and have made only limited changes, primarily in the rig. One of the overlooked aspects of the Azzurra performance is the helming and especially the starting of skipper Guillermo Parada. He may not be an America’s Cup or Olympic medal winner but his consistency and focus are impressive.

Parada concedes that ‘we were all surprised with Sled’s performance, so we worked a lot on different rig tunes; we changed our rigging to give us a greater range of movement in the set-up, especially in the heavy-air stuff. Historically we were strong in the breeze and in fact we were second at Porto Cervo, so we didn’t spend a lot of time worrying about those sails. But clearly Sled was in another league. We brought most of these changes to Valencia last December where we were happy with the improvement.’

Afterguard changes are a seemingly inevitable part of that hunt for improvement. The quest for yet more Olympic medals has wrested Santiago Lange from the 2019 champions Azzurra and the prodigiously talented Šime Fantela from Bronenosec, while America’s Cup commitments drag Juan Vila away from Quantum Racing.

Fleet experience currently seems to be slightly favoured over youth or potential tactical brilliance. Look at the line-up changes this season and Alberto Barovier’s choice of Fantela for Bronen – osec in 2019 in retrospect looks bold and inspired… and it worked out well for them. But risk management and experience of the different teams and their respective playbooks are prized resources, as is the ability to slot quietly and efficiently into a new crew.

Michele Ivaldi returns to Quantum Racing as navigator but brings a strategist’s view to an afterguard that took time to settle last year with the arrival of Cameron Appleton, who often swapped his tactician’s role with Ed Baird when owner Doug DeVos was steering. Appleton in his second year in the job will doubtless be stronger and Quantum might be restored as pre-season favourites.

However, Hutchinson did retain Quantum TP52 designer Marcelo Botín to lead his 40-strong design team over at American Magic.

‘Just as Santi [Lange] took time to learn through his first year in the fleet, so Cameron took some time before he really could say ‘I get it, I see how this works,’ says Quantum Racing director Ed Reynolds. ‘We will be more consistent this year. But saying that, the level of the fleet is so incredibly high… and even. A few years ago we could have sailed like we did last year and it would have been enough to win the circuit, but not now.

‘I am really impressed with where this circuit is and the interest there is in it. Ironically, right now there seems to be a shortage of good boats. We have had several approaches for our boat. I’d bet if there were five good boats available we would have seen new teams coming in.’

Azzurra rely on Michele Paoletti as new tactician, a respected and successful sailor from Trieste who the team knows well and who shares the same culture and values. He sailed in the TP52 class with counterpart Vasco Vascotto in the formative years of the TP52 MedCup, more recently with Vascotto, Parada and navigator Bruno Zirilli on the Maxi72 Cannonball, and sparring against the Parada brothers in the one-design J/70 fleet.

The winter’s hardest workers? Probably the Phoenix crews, who by February had done more than 20 days on their home waters in Cape Town, much of it two-boat testing and training; they also took the opportunity to introduce several of the youngsters from the Royal Cape Sailing Academy to the TP52s.

The Phoenix teams have been working closely on their performance systems with Njord Analytics, whose latest package allows virtually real-time (the delay is 0.3 of a second, we are told) telemetry and data analysis between the two raceboats and the chase boat.

Probably more than any other TP52 crew Phoenix have also been working constantly with the Drone Project, overlaying real-time performance outputs over drone images for sail shape analysis and refining trim and crew manoeuvres. Given the business pedigree of Phoenix owner SAP software co-founder Hasso Plattner, one has to assume Njord Analytics’ systems are up to scratch…